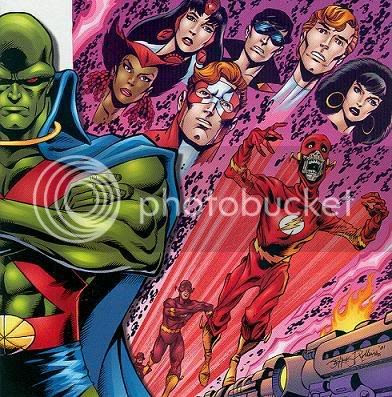 Manhunter's first major appearance during Crisis came twelve years after the series' release. With Legends of the DCU: Crisis on Infinite Earths #1 (Feb.'99), Wolfman returned to write a lost chapter of his epic, set after issue #4. The Barry Allen Flash found himself on a parallel Earth more innocent, and more culturally diverse, than or own. This world's Manhunter looked like a cross between ours and J'Onn in his natural Martian form. Some other Earth One heroes arrived, but they could not save their reality. The parallel Manhunter died with the rest of the Justice Alliance.

Retroactive continuity struck again, this time when the Detroit era League was revisited by John Ostrander and Val Semeiks in JLA: Incarnations #5 (Nov. 2001.) In this first Post-Crisis look at the team, the hypocrisy of Aquaman’s quitting a neophyte League he had himself forced into existence was highlighted by Zatanna. “I resign effective immediately. J’Onn, you should be chairman. You have the most seniority. Good luck.” Both as a good friend and “big picture” type, J’Onzz defended the position. “It’s probably for the best. He was in denial of his grief over the death of his child. It drove off his wife. Now, he’s facing up to what matters most to him. It’s a good sign.” In light of circumstances, Elongated Man (the only other member present) questioned whether there was a viable Justice League left, between the immaturity of its new membership and (as Zatanna pointed out) the recent proliferation of super-teams. Manhunter soundly rejected the notion. “Of course there is [a need for a Justice League]. I respect all the groups you’ve mentioned but none of them does what the League does. The League leads. When there is a crisis, the other heroes--and the world--look to us first to deal with it, to rally others. We set the example.”

Meanwhile, the newer Leaguers were arguing over an article in publisher Tully Reed’s popular super-human magazine, “Meta,” which lambasted the team. Steel quipped to Paco/Vibe, “How can they disrespect you, Taco, when they have no respect for you?” Manhunter condemned, “That was a slur, Steel. Don’t use it again.” Steel went on to question J’Onzz’s appointment as leader. “Your headquarters belongs to my grandfather.” J’Onzz retorted , “We leave and this place is just a large fallout shelter. We take a room and it becomes the headquarters of the Justice League of America. You are in the League. You are not the League itself.” Zatanna whispered to Ralph, “This isn’t the League! This isn’t even a team yet!” Elongated Man consoled, “Ah, J’Onn will whip ‘em into shape. We’ll be okay so long as we don’t go up against anything major!”

The Crisis On Infinite Earths struck, although there was no such thing as Infinite Earths in the Post-Crisis DCU. Ostrander’s explanation sounded more like Valiant’s “Unity” crossover than the seminal comic book event. As explained by suddenly scientific-minded Gypsy, “Our universe was under attack by the Anti-Matter universe of Qward, led by the Anti-Monitor. He seeks to destroy the vibrational walls between present and future. Some alternate futures have already been destroyed. By reducing everything to a single point in time, the Anti-Monitor then plans to blast it with an antimatter cannon, making his universe the only one. His opponent was The Monitor, who created...machines, like temporal tuning forks, to keep time aligned...” The new League members did an admirable job of defending the “forks” against Shadow Wraiths and defeating Fire-Eye unchaperoned. (Fire-Eye, for the many who wouldn’t recall, was the intelligent meta-dinosaur who had previously been encountered by founding Leaguers, but via temporal anomaly, was facing a JLA team for his first time here.) Vibe asserted, “Man, that’s sweet. I wish J’Onn was here to see what we done.” He was. “The crisis is far from over. There is still much to do...but I want you to know that I am proud of you all today...and I am honored to stand with you.”

Steel: Contrary and borderline racist this outing, but he did topple a dinosaur and watch over Vibe.

Zatanna: Virtually nothing. A remarkable duplication of her characterization from the period depicted.

Elongated Man: Fretted over Sue and questioned the usefulness of the Detroit League.

Gypsy: So much it will require separate notation in her biography. Seriously. Stop laughing.

Vibe: Made to look stupid and irresponsible when he tuned out Harbinger’s constant pseudo-scientific droning during Crisis, as if the readership didn’t do the same exact thing. Tried to run game on Kole. Used vibrational powers as directed by Gypsy to repair damages to time.

Martian Manhunter: Separated from his team while trying to salvage the Monitor’s satellite. More on that later.

Most Embarrassing Vibe Quote of the Issue: “This is muy weird, J’Onzz! I don’t do well with weird.”
Posted by Diabolu Frank at 12:00 AM

Man, Steel really is a dick. I could see him jokingly calling Vibe a slur (same as I could imagine Vibe calling Steel a gringo in good humor), but man, this comes off cruel. Not to mention the immature "It's my clubhouse so I'm in charge" attitude. Good thing J'Onn dropped some knowledge on his ass.

Ostrander. Just blame Ostrander. The guy has a habit of skewing toward the least flattering of all possible characterizations.