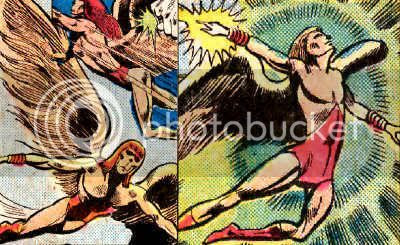 Flamebirds are beings from the planet Sirkus with large wings that can fly and fire jets of flame from their hands. They were employed by Despero to attack an area of Sirkus they had been exiled from for centuries during the despot's campaign against the world. The Flamebirds were rebuffed by an ersatz Justice League of America created by Director Ergon, mostly through direct attacks, but not before they killed a Flash impersonator. It is unknown if these beings have any connection to the Kryptonian Flamebird, as Superman was unconscious during their sole appearance in Justice League of America #133 (8/76.)
Posted by Diabolu Frank at 7:30 PM

So..kinda...a flame on version of hawkman?

My question: Can you detect their presence through the aroma of fried chicken?