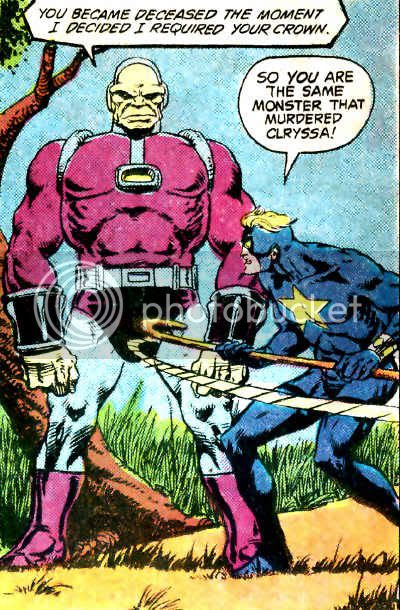 "Born Prince Gavyn of a far-flung interstellar empire, he was executed as a sacrifice to a stable throne-- reborn a hero, he lives on as... STARMAN."

After a much lengthier recap of the history of Starman IV, we learned that his sister Clryssa had been murdered, and as such had passed her rulership of Throneworld on to the now-Emperor Gavyn. However, Starman returned to Throneworld to find it savaged, and his Lady Merria kidnapped. Only the loyal security officer Jediah Rikane stood to divulge what he knew. "...He certainly has no mercy for women! He took Merria! ...The monster knew of your power to track even a stray molecule in the vastness of space! It's got to be trap!" Regardless, Starman followed the trail to the garden world of Diplantha, where he was aided by the spirit of his deceased Mn'torr. Not only did Mn'torr teach Gavyn to allow his mystic staff to guide him directly to Merria, but also commanded it to fire a beacon of light towards Earth. Planetside, Gavyn was warned to flee by his lady love, but to no avail.

"It is far too late... You are a dead man, not a starman or an emperor! You became deceased the moment I decided I required your crown."
"So you are the monster that murdered Clryssa!"
"That is not precisely accurate. I am called Mongul, and the noun you are searching for is not monster-- but master!" 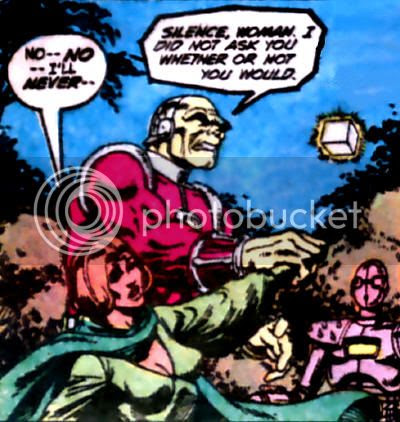 Mongul the Merciless disappeared into an embodiment of red Kirby Krackle energy, and benumbed Starman with one blow. "Interesting... his power seems to be based on stellar energies of some sort. A pity it is not effective. He might have made a good slave."

Starman awoke in a Cube-Trap, stripped of his staff and gauntlets of power. "...As a minimally sentient being, you should have gathered some information about your condition... In sum, reduced to a helpless tool useful only to me. I suggest you remember that. Shall we proceed to transfer the Imperial Crown to my deserving brow... whence it can be the seed from which my former domain may be recaptured? ...I have kept you alive with a purpose in view. My rule shall be entirely legitimate. You see, I am marrying the lady Merria-- and ruling as her consort... Silence, woman. I did not ask you whether or not you would." Mongul's plot involved holding Gavyn as leverage against Merria indefinitely, leaving him in the Cube-Trap on this distant world with a servitor robot to guard and tend to him forevermore. "You will die of old age before she disobeys me. Farewell."

Once Mongul and Lady Merria teleported away, Gavyn was left alone for potentially "hours, days, weeks... even months." Starman was released by Superman, who had melted the servitor into a puddle. "Judging from that cube you were caught in, I'd say you met Mongul. I came looking for him. A weird beacon light came to my fortress, telling me I'd find Mongul here-- and someone who needed my help... The first step is who are you-- and why is Mongul trying to make you into a paperweight?" 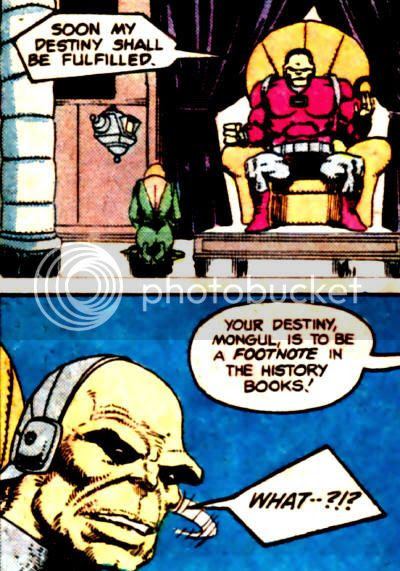 Starman provided the skinny, and the anxiety. "Between our special powers and the advantage of surprise, we have a chance against Mongul. Let's use it, before he hurts Merria." In stark contrast to his last conflict with Mongul, Superman was the calm, rational member of the team. Asking after details regarding the forces now at Mongul's disposal, Superman was surprised to learn the emperor had no real military to speak of. Emperor Rilsom the First simply showed up with a crown one day... and the mysterious means to blow up a planet at will within an hour's time. This control method was wielded sparingly by the generations of emperors that followed, some good, others not. "With just a thought... That's all it takes! The Imperial Crown is the key... Once Mongul becomes attuned to it in the coronation ceremony, there's no way to break that thought link... except death." Superman refused to kill, and instead directed Starman to use his royal knowledge to reach and destroy the crown's power source, while he took care of Mongul. "B-but he's so powerful! You said he'd gotten the better of you in battle before."
"That was before!" 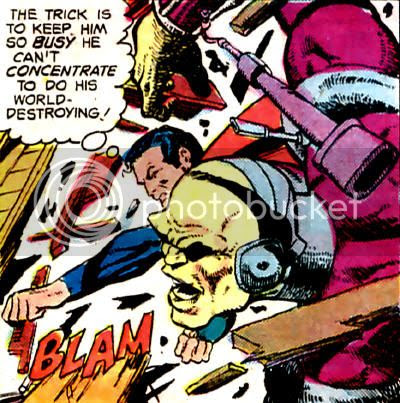 Mongul was pleased, as in the interim he had become Lady Merria's consort, fully attuned to the Crown Imperial, and was all set to go to war. "Soon my destiny shall be fulfilled." Arrogance restored, Superman arrived to interject "Your destiny, Mongul, is to be a footnote in the history books!" Lady Merria rose from her kneeling position at Mongul's feet and, at Superman's urging, sought a safe hiding place. "You dare not attack me, Superman! Not only do I have the power to crush you-- but with a single thought I can annihilate one of the worlds of the Imperium." A Gaze of Steel fixed on the jaundiced giant, Kal-El smirked as he swaggered forward. "First of all, Mongul, I don't believe you. Second, this 'Imperium' means nothing to me. I don't care if you blow it all up. Third, I came to take you on, man-to-man, and nothing's going to stop me from doing just that!"

Though Mongul thought the Kryptonian had lost his mind, it was in truth a bluff to allow Superman to get close enough to start punching, in hopes a brawl would keep the Merciless One from wielding his imperial power. Thanks to his shock and hesitation, the jaundiced giant was knocked through the imperial throne, took another shot to the chops, and a jab caused his flailing form to collapse a pillar!

Meanwhile, Prince Gavyn made his way toward the power source for the doomsday device, hidden within the sun that shone on Throneworld. Only Starman could survive the plunge through his ability to absorb and redirect the solar energy pelting him-- and only just... 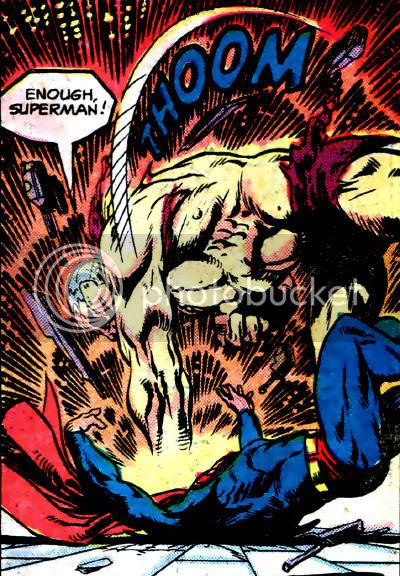 Mongul struggled to rise to his feet, but was hammered through the floor by another Kryptonian blow. Having had enough, Mongul let loose energy blasts from his hands that sent the Man of Steel flying backward. "You may have your wish, Superman-- we shall fight man-to-man, as you put it! Or as I would say, you may die at my hand! Are you ready for that, Superman?" Concerned Mongul might detect Prince Gavyn's progress toward the doomsday device, Superman absolutely let loose with his heat vision, and accomplished little more than disrobing his foe. "Great Krypton! He's still standing! I hit him with everything I had and he's still standing! That's never happeened before!"

The Last Son of Krypton dove into Mongul for another attack, but was soon rebuffed, as a flaxen fist drove his head into the ground. Another incredible blow knocked the Man of Tomorrow across the room. "If I am to inaugurate my reign as master of the universe by slaying you, so be it! But let it be done now!" Superman moaned as Mongul hovered over him, pounding endlessly, until the entire throne room collapsed in on the pair. Only Mongul the Merciless rose from the debris. "The Kryptonian was a fool. He knew I was the more powerful, yet he fought on! He should have known it was hopeless from the first. Still, even a flea may teach a dog with its bite. Superman wasted so much of my time that I am inclined to delay no longer. I will speak to the assembled worlds of empire-- now!"

Sitting in a chair, wearing only a makeshift loincloth and boots, Emperor Mongul addressed his subjects through video screens. "By the power of the Crown Imperial, I command you all to assemble the power of your worlds-- gather them together for my greatness! First we shall strike against the world of my birth, against the ancient Arkymandryte who made me flee my rightful throne-- then we shall bring the whole universe under my governance!" 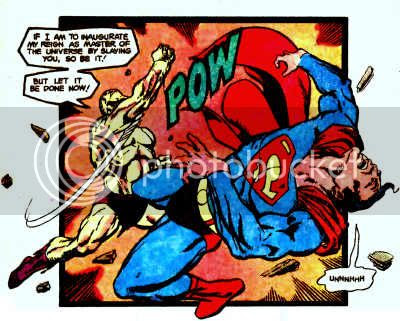 The ruler of an imperial world snorted, "Uh, quite sorry to tell you this, old man... but that's simply impossible." Though Mongul threatened his globe, sensors had already confirmed the doomsday machine's destruction. Even when the malignant alien threatened the ruler's planet with his own power, this man was nonplussed. "You have our sincere congratulations on being the last of the emperors, Mongul... and we bid you farewell... Obviously you failed to study imperial history." You see, all the planets in the empire were mobile, "equipped with starship engines powerful enough to move worlds! And they are all running away from me! Even I cannot chase half a hundred worlds through space!"

Suddenly, Superman and Starman arrived in the conference room, aware Mongul had lost his imperial might. "There is power enough in my hands to crush you both! ...Bah! I have no time to waste on mortal fools like you! You have thwarted me for today, but the universe will soon be mine-- and you shall have a special place in it that day-- when you die calling me 'master'!" After Mongul teleported away with a "POOF," Superman dropped limply to his knees with a "Whew!" Starman slumped over a computer panel, confessing "Thank the stars he left! I don't have an erg of strength left after burning you clear of all that wreckage." As the Kryptonian prepared to stand, he observed "Mongul's a big bully at heart, Starman-- that's the kind that always turn and run."

Starman realized he'd served the purpose he was born for in destroying the doomsday device, though it meant the end of his empire. "So that means Emperor Gavyn is dead... Long live Starman?" In reply, "You've got it, Superman! I'm on my own again!" Merria reminded, "You're not really on your own, love. Not while I live." The lovers embraced as Superman smiled and flew off. "I guess the universe loses one empire and gains a very happy hero. Now that's a nice thought to keep me warm on the way home! ...And it's a l-ooooo-ng way home!"

"Whatever Happened to Starman?" was a fantastic effort by Paul Levitz and Jim Starlin.
Posted by Diabolu Frank at 8:00 PM