The Aquaman Shrine & I Am The Phantom Stranger 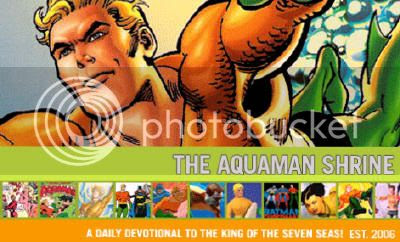 The turning point for my fumbling my portion of the "Crisis on Earth-Blog: The DC Challenge" was when I was dropping a linklist into my otherwise completed Captain Comet/...nurgh... post, accidentally stroked the wrong key, erased all my text save the linklist, and had Google Blogger/Blogspot auto-save on me before I could back out of the page. I've been editing my posts on-site for over two years, but this over-anxious saving by Google has cost me tons of my time by "eating" my work...

...Like it did again tonight, when I lost Version 1.0 of this post at near completion. Yes, another linklist insertion gone awry. Kids, edit your post in a doc file first, or suffer the consequences. Speaking of the crossover, I'm not damned well done with it. Look for more in coming weeks.

Other folks have wrapped up their involvement, and done a fine job with it. To catch-up with days I missed blogging, I'll be hitting the "Thank You Trail" and spotlighting each blogger who helped make their end of the crossover happen (and supplied me with space to do my own thing.)

Rob Kelly has quite a "family" of blogs. They include intense coverage of M*A*S*H, Power Records, DC Comics' Coming Super-Attractions..., Digest Comics, Hey Kids, Comics!, Treasury Comics: The Blog!, All In Black & White For 75 Cents, The Amazing Blog of DC Comics, Justice League of America Satellite... the list goes on, including one for his profession, Rob Kelly Illustration, and others he co-writes or is developing.

Rob's first blog involved with the crossover was I Am The Phantom Stranger, begun on Friday, October 31, 2008. At that time, I commented "I was introduced to P.S. through a Brave and the Bold team-up, as well as appearances in back-ups. I have a nostalgic fondness for him, but I've never read a story to move me past that point. We'll see how the blog does on that front..." Or not, as it turned out, since writing blogs can really get in the way of reading blogs. Still, I tied involvement in the crossover to a George Perez group pin-up featuring the Phantom Stranger, so I asked Rob if he wanted in on that action, and he answered in the affirmative. Well, things went a bit awry, and to keep P.S. in the crossover (and only after an attempt to shift the responsibility elsewhere,) I attempted to write P.S.'s challenge. Not feeling comfortable with P.S. as a solo star, and lacking time to do something like a trivia challenge. I opted to have the Stranger team-up with Zatanna (as he had in the picture,) and use the blog to promote others through in-story plugs, while also advancing the overarching story I moronically thought I could produce over a weekend. As it stands, I only barely got the narrated linkpost together, but I hope to pay off everything set up there in time.

Meanwhile, that same Perez illustration should have featured Aquaman, and based on that assumption, I asked Rob to tie The Aquaman Shrine into the event. As it turned out, Perez had unintentionally omitted Aquaman, as well as another character belonging to another blogger I'd invited to the party. Based on those two foul-ups, I added a second pin-up by Alex Saviuk, as well as a number of additional characters for bloggers to use, including Aquaman.

The Shrine was established on Friday, October 13, 2006, though I wouldn't learn that until the following year, thanks to a link at The Aquaman Website. I was so impressed by what Rob had done with one of my favorite super-heroes, a number of months later, I resurrected my old WebTV Martian Manhunter: The Rock of the JLA fansite (2000ish-2002) by adopting the same post-a-day format. I was only four days in before acknowledging the Shrine's influence in Comrades of Mars: Aquaman, where I discussed the odd relationship between our blogs' subjects. I also elaborated here.

A few months later, I took a rambling reply to Rob's bemoaning Aquaman's "Golden Mullet" period, removed most of my text from the comment, and turned it into a brief argument for the acceptance of even really crumby eras of our beloved characters' histories. Of Hook Hands and Idol Heads even allowed me to use art by Alex Ross my friend Dave had tinkered with for my old site.

Celebrating A Banner Day when artist Michael Netzer gave me a wonderful new blog banner, I also hinted at my feeling the Idol-Head was to my mind naturally the Shrine's far less popular eyeliner-and-Cure-loving angry stepbrother, a point I drove home with unambiguous The Idol-Head vs. the Aquaman Shrine.

When Rob's series of fictional Aquaman team-up comic mock covers Surf and Turf #4 featured the Martian Manhunter, I left him an accompanying story as a comment, and Rob later allowed me to post both here.

During Michael Netzer's campaign to "save" J'Onn from imminent death in Final Crisis, preferably involving his drawing related comics, I suggested Netzer contact the Aquaman Shrine and Atom: The Tiny Titan blog about promotional support. A Aquaman & Martian Manhunter Preliminary Sketch and a completed piecewith the Atom resulted.

Throughout The Idol-Head of Diabolu's blog life, the Aquaman Shrine has been a friend, and I was happy to write an interactive story for it's "challenge" offering. I wish it had been longer and more twisting, and I only just today got around to editing in a "deleted scene" I'd forgotten to include, but I think it turned out alright.

So thank you Rob, and here's a nice long highlight reel from the last few months of his flagship blog...

Labels: Aquaman, Martian Manhunter, The Rock of the JLA, www.martianmanhunter.com

Woo! Somehow I missed this post! Thanks for all the attention Frank!