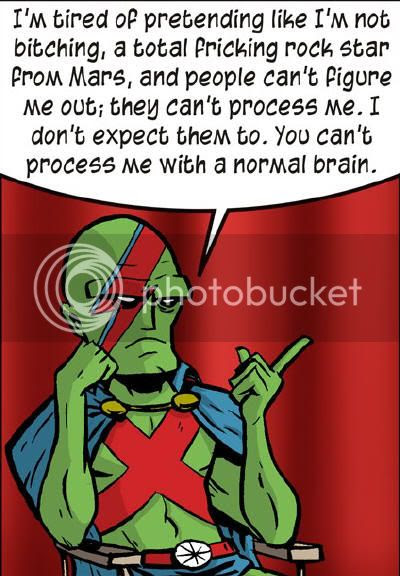 I have never liked Charlie Sheen. He's a terrible actor who seems completely out of place in his often miserable films. For most of his career, he was a smug charisma void, and until Two and a Half Men, his comedic timing was as off as your average politician. The only thing worse than the string of vapid (literal) whores he has cohabited with and his tendency to assault them on coke-fueled rampages is the fact that he keeps siring offspring to watch it all go down. The world would be a better place if Chuck Lorre had been smart enough to hire Emilio Estevez instead of helping Sheen finance the Sober Valley Lodge Porn Star Harem.

That said, watching Charlie Sheen's winning streak of late has been like mainlining id at a flow rate of 140 liters of psychosauce per picosecond. Like the rest of the internet, Comics Alliance is in love with The Warlock, and solicited Let's Be Friends Again web cartoonists Chris Haley and Curt Franklin to step into the octagon by creating images of fourteen super-heroes in an interview setting offering direct Charlie Sheen quotes. If you haven't been following this insanity, you may think that liberties were taken, but I swear that these are verbatim. Check out the whole collection (compiling two sets) to date here.

Let me add that as much as I appreciate the reference to Aladdin Sane, I got the biggest kick out of the old school pie belt buckle.
Posted by Diabolu Frank at 12:25 AM

I seldom watch Two and A Half Men, and have found the rest of the cast more interesting than Charlie Sheen. I enjoyed the collection of quotes.

The irony is that most people WOULD have trouble understanding someone as different as the Martian Manhunter, who comes not just with a different culture but one underpinned by vast differences in biology. (Telepathy alone would make a vast difference in how a society would develop.) Of course, I think J'Onn would share my diagnosis of Charlie Sheen: the man needs a LOT of help.

Good points about J'Onn. I'm still hung up on the prospect of his doing battle with Ziggy Stardust and the Spiders of Mars, though... in the octagon!

The thing about an egomaniacal douchebag like Charlie Sheen is that when you're 45 years old and still carrying on like this, I figure you're too toxic to live. Barring his turning out to be the second coming of Keith Richards, I suspect he's already physically and mentally at the point of imminent implosion. Barring that, he might crash and do a rehab turnabout to become one of those super uptight jerks that is "so clean" he wants to tell everybody else how to live their lives. We're laughing now, but with his obvious hatred of women, complete absence of conscience, and total disinterest in anything beyond his own sphere, he could snag a presidential nomination in 2031.

If you went back in a time machine and told me that in a future I'd be reading a fan comic featuring the Martian Manhunter speaking Charlie Sheen's word salad (if that's what you can even call it?), I definitely would not have believed you. And hey, look, here we are! It's a crazy, crazy world we live in.

At least they finally took his twins away from him, thank goodness.

Getting the twins away from Charlie Sheen doesn't get the Charlie Sheen out of their DNA. Hope their faces don't melt off at puberty.

I'd say this was one of the more coherent meme'd statements. I hope Grant Morrison is making a killing writing his interview scripts.

That's some funny shit, Man :D
That Charlie guy is surreal- it would be easier for me to believe in the existence of a Martian Superhero than a guy like that...