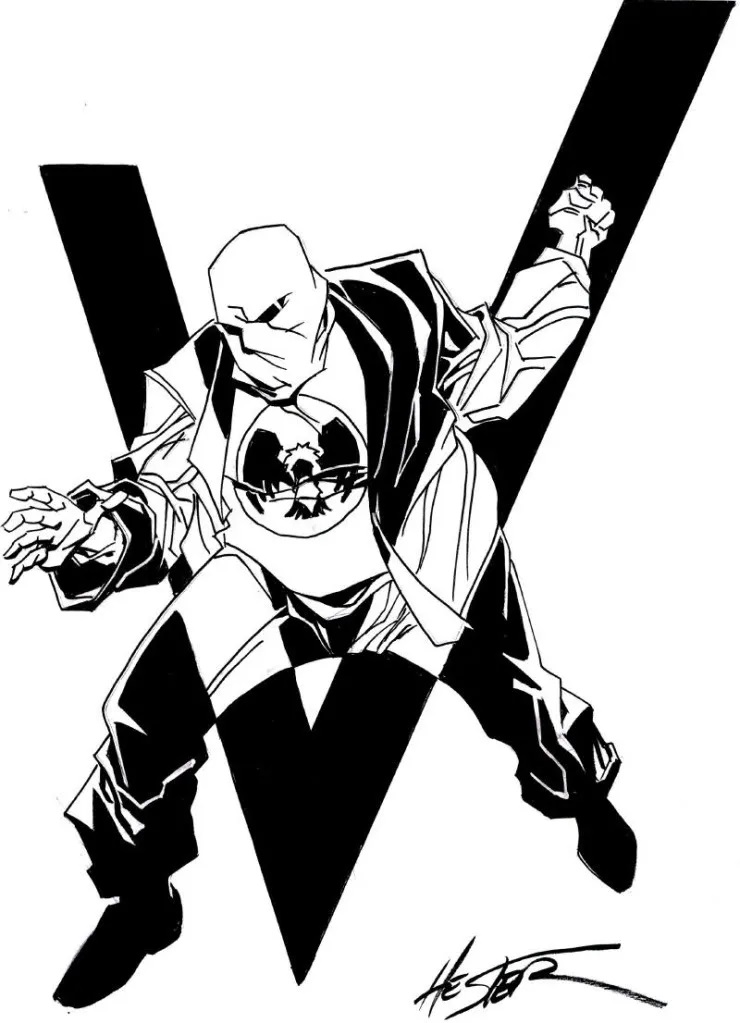 I've had a long strange trip towards appreciating Phil Hester. I believe I first encountered his art through some forgettable Justice League America and Swamp Thing stories, but my first solid memory was elsewhen.

I'd bought a set of By Bizarre Hands, a Dark Horse Comics adaptation of Joe R. Lansdale short stories. I was reading them in a waiting line to potentially get them signed by the author at a ratty little sports memorabilia & whatever convention at George R. Brown in the mid-'90s. I eventually blew that off, and Hester's material within wasn't really my bag. Still, I tended not to see Hester on any of the books I followed, so it wasn't an issue. However, his four year run on Green Arrow years later impressed everybody.

I've always been a Nightwing fan, but avoided his book because he seemed to go from one artist I hated to another on his solo series. When it was announced Hester would be taking over the title, I finally had a chance to happily buy the book. One of the comics that made me like Dick Grayson was a 1983 Batman annual drawn by Trevor Von Eeden, a brilliant underrated artist at the height of his powers. Hester reminded me of Von Eeden on the character, and that's high praise. I followed Hester to The Irredeemable Ant-Man and also picked up a number of the books he was only writing, like Firebreather, The Darkness and Vampirella. Good stuff.

Last year, I tried to get J.H. Williams to do a Mr. V for me. Faceless is a difficult character, because even though he was the head of an international crime organization and the chief rival of the Martian Manhunter in his final Silver Age series, he looks dorky. Mister V is built like the Comic Book Guy, complete with what might as well be a Graphitti Designs Vulture symbol t-shirt. He throws a featureless mask, white gloves, and cheap suit on top of that with all the fashion sense of Leatherface. It takes a special kind of artist to pull enough of those elements off for the character to be recognizable, and Williams was one of the few I considered capable. However, I either miscommunication my desire for a full commission as a freebie/cheapie sketch, or Williams simply wasn't up for it.

Phil Hester is not only another of those rare few I think could do Mr. V, but if anything, I figured he was better suited for it. Going through Hester pieces at Comic Art Fans, I realized this guy's batting average on gorgeous commissions was exceptional, with a broad range of body types and a gift for making plainclothes interesting. Mr. V and Phil Hester was too perfect of a match for me not to work something out at the con.

Hester was the first artist I talked to, although I opened by discussing the Dr. Trap I got from his friend and booth partner Andy Kuhn the previous year. Then I started explaining my Martian Manhunter rogues gallery project, and how I thought he was the man for the job of pulling off Faceless. I was worried that, like most artists, he might find such a character boring. I also offered him the chance to do the first "Post-Crisis" Faceless, with essentially carte blanche to redesign the character, so long as he kept the mask and at least a stocky frame (or as I put it, "There aren't enough fat guys in comics.") Hester replied that he was excited about doing the character as he was, but he had a piece in the works, and probably wouldn't be done with mine until lunchtime. That was no problem for me, so I progressed on.

I kept my eye on numerous tables where I expected artists I wanted to handle business with to show, but hours went by without many turning up or my getting anything positive done with them. I finally dropped by Hester and Kuhn's table to ask if they knew anything about the absentee artists. Hester told me straight away that Don Kramer had gone for good, but the other guys should show up eventually if their placeholders were in sight. That was helpful to know, even if nothing came out of any of those prospects.

When I picked up Phil Hester's piece, I was gobsmacked. The commission was even better than anything I could have imagined. He'd somehow managed to make that tubby Faceless bastard look dynamic without in any way compromising Joe Certa's original design. Hester had cast the shadows around Mr. V's eyes into a vaguely serpentine arch. The Vulture symbol I'd made a point of offering clear reference for was adhered to and folded with Faceless' shirt. My favorite element of all came out of a design conceit in which a stylized "V" with an ascending right trajectory crossed over the figure, contrasted through negative space. The sharp shifts from blacks to whites across the background and foreground vitalize the piece with verve (if that's not redundant.)

One of my challenges to the artists is that when you're drawing an obscure character unseen for decades and usually designed by journeymen, these commissions serve as an opportunity to draw the finest depictions of the characters in existence. I feel in this case, Hester absolutely took that title. It's not like that bar was set by a George Pérez or Alex Ross, but I'd like to see Frank Miller try to pull off a more perfect "chiaroscuro" effect on Faceless than what Hester accomplished here. It's pretty cool to come full circle as a fan of Hester picking up an original piece at the same convention center as where I was dismissive of By Bizarre Hands, especially since even the area of the center being used was in a much better place today.
Posted by Diabolu Frank at 12:00 AM

I've know Phil for around 10 years and have rarely met a nicer comic creator. He is always willing to talk with the fans of comics (not just of his work) and is one of the nicest people I know. He has done over a dozen sketches for me at various cons around the midwest and at one time or another has drawn a complete (original ten members)Justice League for me. I have never been disappointed in his work and yet I admit I am envious of the piece that he did for you.

That's awesome, Prof! Do you have any of them posted online? I've only ever seen his Atom as an aside in somebody else's piece.

Most if not all of them are on comicartfans.com under my name of Todd Wilson.
Here is a link:

Boy do I need to update the site..I have around 20 new sketches and 6 pages of artwork to post there.

Hah! I hadn't made the connection between how many of those Hester pieces I ran a few weeks back were yours! That is a mighty impressive collection, and I'm envious of your getting tons of favorite artists. I regret so many missed opportunities in the past to have gotten started collecting art, and I can only hope that I someday have anywhere near as worthwhile a library!

One benefit of having a daily blog to feed is that if I get a piece of art, it's scheduled as soon as possible to post. If I didn't need to make sure I had something worthwhile for each week leading up to finals, I would have unloaded all my Comicpalooza stuff a month ago. I've got four more pieces to go, but all but one is written and 100% ready to publish, just in case my school schedule tramples me.

Quote
"One benefit of having a daily blog to feed is that if I get a piece of art, it's scheduled as soon as possible to post. If I didn't need to make sure I had something worthwhile for each week leading up to finals, I would have unloaded all my Comicpalooza stuff a month ago. I've got four more pieces to go, but all but one is written and 100% ready to publish, just in case my school schedule tramples me."

I am looking forward to the four pieces of art. I will try to update my comicartfans page soon...the local group at the shop bought me a commission piece from Ramona Fradon (check on comicbook database for what she did in the sixties and seventies for DC) for my retirement from teaching. I'm the one who is envious of some of your sketches that you have posted.

Now that I am retired I plan on attending 3-4 cons per year.

Oh, wow! What a great use of negative space. That's such an inspiried touch.