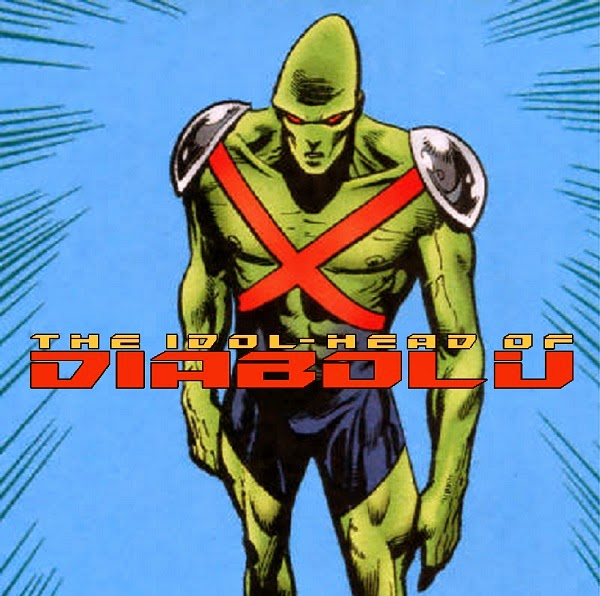 Look for us on iTunes!

As part of a Super Blog Team-Up crossover, we look at Imaginary Stories featuring the unfamiliar J'Onn J'Onzzes of parallel dimensions! Trip the light fantastic with the below blogs/vlogs/podcasts!

#SBTU Multiversity
We enjoy dialogue on the red planet, so here are our non-telepathic contact options:

Happy Birthday to Krypto, first published on January 27, 1955 in Adventure Comics #210! "The Superdog from Krypton" has yet to team up with Jupiter, the Dog with a Martian Master, but the artist's invention of "The Justice Pack" does include some sort of Wolfdog from Mars.
Posted by Diabolu Frank at 12:00 AM No comments:

Superman's here? Shoot, is someone from the Revenge Squad about to turn J'Onn J'Onzz into a jobber again, or is this another round of unnecessary fighting between Man of Tomorrow and Manhunter from Mars with the new twist of wedding reception cake crushing? No, it's okay, these two are supposed to be friends, and Kal-El is probably in a ba(r)king mood in advance of his beloved Dog of Steel celebrating his 420th birthday (or in human years, Krypto turns 60 on January 27th.) In publication time, Krypto arrived about eight months ahead of the Sleuth from Outer Space, and was celebrated across 16 pages pf the same SDCC '05 convention book (including two text articles!) The dual birthdays weren't really noted in the book, though there was a modest connection drawn that I'll post next week. I'm not sure if J'Onn has ever hung out with Krypto, but M'gann M'orzz...

Robin Thompson is a Vancouver based independent comic artist and publisher whose offerings include the rough hewn Champions of Hell, but he's also produced all-ages fare. You can reach him via Facebook or buy his merch here
Posted by Diabolu Frank at 12:00 AM No comments:

This one's just a mess o' random congrats, innit? A xenomorph from Alien stalking Marvin the Martian. E.T. the Extra-Terrestrial chatting with Mars Attacks! My Favorite Martian's Uncle Martin being buzzed by hot rodding grayskins in flying saucers. All surround a Timmverse J'onn J'onzz, while a Squeeze Toy Alien cameos in the corner box.
Posted by Diabolu Frank at 12:00 AM No comments: 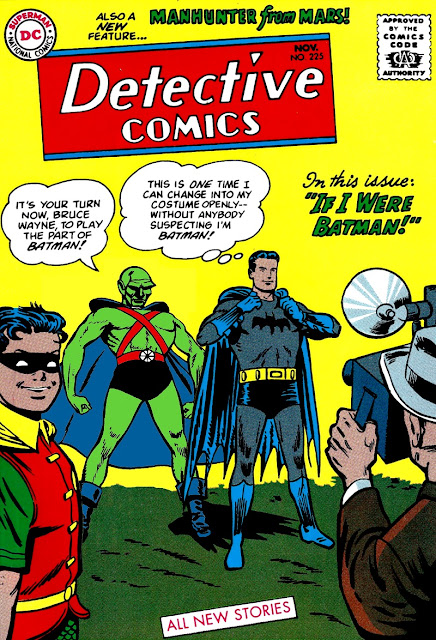 Look for us on iTunes, or elsewhere

Three episodes in, we finally cover the debut comics of J'Onn J'Onzz, the Manhunter from Mars. The Batman and Roy Raymond TV Detective stories from Detective Comics #225 are given brief nods before diving into a synopsis of "The Strange Experiment of Dr. Erdel" (01:46). A rather overwrought analysis of this first story of Detective John Jones (05:54) precedes coverage of the second "half" of the origin, the run-of-the-mill mostly standalone tale "The Case of the Magic Baseball" (18:46). Finally, "Martian Morphing Mail" (21:10) has already morphed away from the previous episode's audio, and is a bit livelier this round. Coming in at a stout 31:24, look for the show to lean back up again now that the heavy lifting of our subject's introduction is out of the way (and hopefully less painful voice "acting.")

We enjoy dialogue on the red planet, so here are our non-telepathic contact options:
Posted by Diabolu Frank at 8:43 AM 2 comments:

In 2005, the Manhunter from Mars celebrated his 50th anniversary as a comic book hero. DC Comics didn't acknowledge it in any way, shape, or form, although the storyline "Crisis of Conscience" did show J'Onn J'Onzz the permanent exit door on JLA membership for the first time since 1984. This blog didn't start up until 2007, and while we didn't specifically celebrate fifty-five, I think it was a good year for our output overall. Also, 2010 was the year J'Onn was resurrected in Blackest Night, so there's that.

With all the hubbub around the 75th anniversaries of Superman and Batman in 2013-2014, and the presumed dual celebration of the Flash & Green Lantern crossing that landmark this year, I want to do something special here. It's a safe bet DC will once again forget the Alien Atlas' 60th, even though his birthday is a lot more legit than their shoving Barry Allen and Hal Jordan into the spotlight.

I suspect 2015 will be my last year of routine blogging, and I want it to be the best possible, so I've been working on projects to do the anniversary up right since spring of last year. I was lucky enough to stumble upon the '05 SDCC convention program book at Comicpalooza for ten bucks, which devoted 17 full pages to art and a text article for the Sleuth from Outer Space's half-century mark. Hopefully he'll get something like similar treatment in this year's edition, but in the meantime, I've scanned all of the 2005 pieces for presentation on Fiftieth Friday for the next few months. Enjoy!
Posted by Diabolu Frank at 12:00 AM No comments: