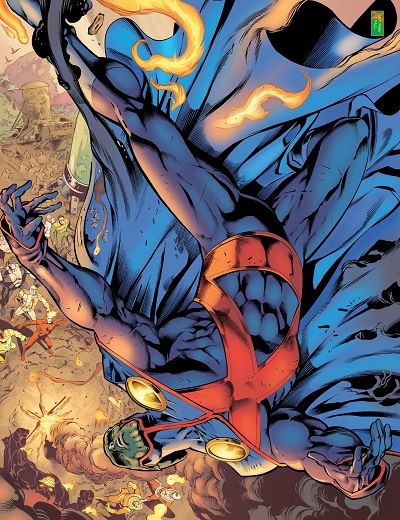 Another week later on Hell Planet. Catwoman continued to keep her own company while spying on others. The Joker's camp, being the most shiftless, launched a predawn raid on Luthor's supply silos. Although Joker's side was outnumbered, he managed to get the drop on Lex before Deadshot got the drop on him, leading to a Mexican stand-off. Then Catwoman got caught on the scene and Lex managed to talk all parties into believing she was a spy for Waller's people on Earth. To save her own skin, she gave up Blockbuster's true identity and fled the scene.

Despite remaining visible and tangible while trying to talk to the assembled villains and it being known that he was in possession of a communicator that supposedly reached back home, everyone piled on the exposed Martian Manhunter as hard as they were able while tripping over each other. J'Onn took a punch from Mammoth and a citrus-like fruit to the head. He retaliated by dive-bombing Giganta in the solar plexus and simultaneously battling 20+ bad guys without breaking a sweat. He also blasted a (cyborg?) villain (Thinker?) through the chest with laser vision in what may have been a fatality, but the dude was too obscure for me to be able to positively identify. The Alien Atlas didn't run into trouble until Luthor gathered the sonics for an initial counteroffensive and then a group of fire-blasters (including Neutron, Heat Wave & effigy) for the coup de grâce. Sure the valuable communicator was destroyed, a powerful potential ally was felled, and wrathful heroes surely would be even less inclined to rescue them (and might actively retaliate,) but Salvation Run, ya'll

Elsewhere, Vandal Savage revealed to Lady Flash that the women he lured away were intended to be his personal breeding stock, and would have no say in the matter, because he only meant that this would be his paradise. Plenty of room for fights and two page spreads, but not even a smidge for subtlety. Also, it turned out the Hell Planet was created by Apokolips as a training ground for Parademons, and the trainees having the opportunity to take on all those super-villains would surely forge some of their greatest soldiers yet...

"Through a Glass Darkly Deadly" was by Matthew Sturges, Joe Bennett, and Belardino Brabo. Why yes, that is a new art team five issues into a seven part mini-series. On the right book with good embellishment, I have no major problem with Sean Chen, but his loose perfunctory work here only made an ugly book uglier. Bennett makes the title look so much better, at times I almost forgot what a stinky turd the script was. This book fits neatly in a pattern where some muckity muck at DC *cough*didio*cough* talks a modest talent without a serious following into executing a terrible idea that tanks their career.

Posted by Diabolu Frank at 7:56 PM