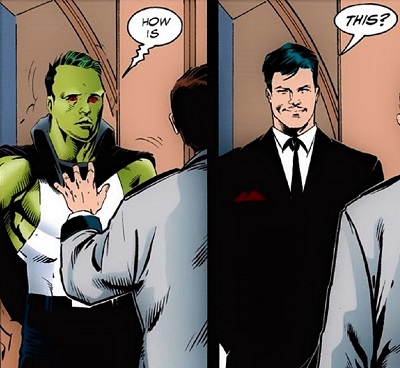 The Gotham City Executive Club could barely tolerate the rest of the Justice League's attire, but J'Onn J'Onzz's mankini was entirely unacceptable. Shapeshifting into what probably seemed like Tony Stark in a tuxedo, but what true fans would catch as a callback to Marco Xavier, the Martian was finally allowed passage. Once inside, Green Lantern led the team in an inquisition of Simon Carr, as it was suddenly untenable to have a mysterious benefactor giving them likely billions of dollars in support with no questions asked. "For all we know, Vandal Savage could be holding the purse strings!" Weirdly gendered phrasing from Black Canary. During this rather unnecessary public spectacle, Maxwell Lord tried to bet Bruce Wayne over who could "nail" Canary first (not-so-oddly gendered phrasing,) but Wayne was all *who are you* and *this is boring* about it. Both Wayne and Lord had no patience for the more prejudiced club members treating the League as riffraff, with Lord expressing a keen interest in turning them into his personal army. Foreshadowing, both intended and unforeseen. Speaking of, the Marco Xavier form was abandoned by page 3 for effect when The Sleuth from Outer Space affirmed that Carr was telling the truth because "I read his mind." I believe J'Onn rightly asserted on the "ride home" that he'd previously disclosed this ability, but the team had a delayed freakout over the implications. "I'm sure J'Onn wouldn't invade our private thoughts... right, J'Onn?" In her personal time, Dinah Lance hashed out her beef with mom over coffee with friendly Officer Mike. Cut to the various new supporting cast members who've inserted themselves into the League's civilian lives to gather data and build intelligence files. The dossiers were hidden behind a holographic wall, and there was some questioning the ethics of manipulating the team members, assuaged by having "much at stake". Locus saw value in such files digging up "dirt," though their leader was content to simply allow the League to be distracted by other threats as they continued their own agenda unmolested. Genegrafting their minds into superior new bodies would assure their survival in the coming holocaust. Boy, this issue is full of problematic phrasing, as even by the '90s the term "holocaust" was firmly associated specifically with the Nazi campaign of genocide, though as with "ghetto," later association doesn't negate a word's independent origins. 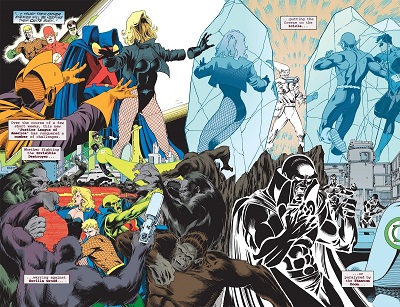 There's a two page spread of the Justice League's unrecorded missions, battling the Invisible Destroyer, Icicle, Gorilla Grodd, and the "phantom doom." Typically, this would be where you'd reference actual stories from the League canon to establish a time frame, but the creators chose to frustrate future wiki contributors with ahistorical matches involving villains individual Leaguers had already beaten on their own. Clark Kent was doing a story on the team for the Daily Planet, and caught sight of them battling one another while mislead by an illusion cast by Xotar the Weapons Master, one of their earliest foes. Superman's heat vision slagged whatever literally futuristic device Xotar was employing, and clear-eyed, the League turned their attention toward their true enemy. Green Lantern embarrassed the team with a ham-fisted error, but clean-up was a snap with the Man of Steel pitching in. Superman smashed a "time-porter," and Xotar was seemingly flung back to his starting point 10,000 years in the future. Still, Lantern was staring daggers at being upstaged, while the rest of the starstruck team gave Superman a tour of their headquarters (with a security system incorporating Martian technology.) At the urging of Aquaman and Canary, the Flash finally offered Superman League membership (seconded by Arthur.) In an abrupt chapter close, Superman turned them down, retroactively stripping Metamorpho and Black Lightning of their privileged status as first refusals. "The American Way" was by storytellers Mark Waid / Brian Augustyn / Barry Kitson with inker Michael Bair. I enjoy the crisp, dark line that Bair provides, adding just the right touch of edge and mood while still maintaining Kitson's overall genteel Silver Age quality. Sekowsky drew the original stories, but he was an atypical DC artist, with his awkward, rough-hewn figures and stylized, angular backgrounds. This series feels like the Justice League being reclaimed as part of what Jacobs & Jones called DC's 1950s "Frigidaire" house style of clean, clear, antiseptic, conformist commercial art. That may seem like a knock, but after the grotesque excesses and perilous upheaval of the Chromium Age, this was a comfort to aging '90s audiences. The industry had reached its ultimate peak, fractured violently, and plunged to lows that seemed liable to terminally pulp the art form. A pleasant nostalgia piece was entirely called for in 1998, with just enough Image sheen to satisfy the fanboys. 1990s, Aquaman, Black Canary, Flash, Green Lantern, Justice League of America, Justice Society of America, Martian Manhunter, Retcons, Superman, Vandal Savage
Posted by Diabolu Frank at 4:12 AM

Who or what is the Phantom Doom? I can't find anything on it.

My assumption is that it's just a veiled reference to the Phantom Zone at a time when it was forbidden by Mike Carlin's Superman office.