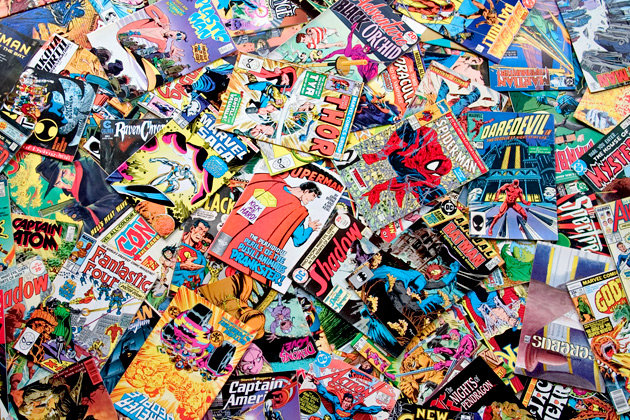 An article by Eric Spitznagel went up on Yahoo Finance yesterday titled Those Comics in Your Basement? Probably Worthless. This should not be news to anyone we reads this blog, especially if they ever worked in comic book retail... but maybe your redneck cousin brought in a longbox full of water-damaged post-"Reign" triangle-numbered Superman comics that reeked of cigarettes and was appalled that he was offered a nickel each? Hell, my own father has probably given undue thought to how to divide up his complete set of "Rise of the Midnight Sons" in the will, so it's a common enough delusion.

See, there was a time when every kid in America read comic books, and those kids gave birth to a large generation of offspring noted for its nostalgia, qualities of arrested development, and hefty disposable income. Of course the Baby Boomers created an industry of paying increasingly exorbitant amounts of money for pristine copies of childhood artifacts that were previously treated as disposable entertainment, thus made rare. Further, it makes sense that these boomers would influence the successive Generation X to do the same, with the enormous caveat that the cultural impact of comic books had significantly lessened as the drive for preservation and mythologizing of value insured a much larger pool of available antiques for a smaller circle of potential buyers.

Meanwhile, the comic book characters the boomers and X loved were introduced to Millennials through non-comic media, and they're a generation who are both more monetarily savvy and less attached to material artifacts of their past when digital replicas are much more convenient and readily available for free on the internet. Of course, now that the boomers are looking to work well into "retirement age" and they have no legitimate nest egg, they're looking to cash in on their comic book "investment" by selling to the meager tens of thousands of middle aged contemporary collectors who are surviving on credit cards and already bought all the same books they're trying to dump years ago. We already knew early Image and late Valiant were worthless and abundant, but what happens when the house of cards that was the post-Silver Age back issue market collapses? Well, we have the exact same market we've had since the speculator bubble burst in the mid-90s, and some financial analyst turns it into a news story for guys who have been divorced from comics since they completed their set of Ultraverse debut issues.

My excuse for posting this rant here? To illustrate the article, someone either scored at one of the finest quarter bins in the tri-state area, or they dumped out a box of their own eclectic comics on the floor and took a picture. Surely the overprinted and ridiculously overvalued Spider-Man #1 was centered for a reason, and the blip in popularity around Byrne Superman relates to the subject. Even early Bronze Age Blackhawks and Adventure Comics fit the narrative of "old does not equaling $$$," but was anyone ever convinced Raven Chronicles was equivalent to a savings bond? My favorite though is in the upper right corner. I don't believe anyone has ever paid more than $3 for Martian Manhunter #1 in the quarter century since it was published, and quite frankly, I felt like a rube for shelling out $1.75 when I bought it in 1988. It's been cheapie bin fodder since the month after it was released. In fact, no Martian Manhunter comic has ever been worth more than cover price. Ever. And it probably never will be.

However, if you can get a copy of Detective Comics #225 slabbed at 8.0+, there will inevitably be a movie, and on the off chance that it doesn't suck, you might actually have won a straight in roulette (a win probability of 2.63% for betting a mere $5K or so.) Alternately, the oil economy will collapse into barter/barbarism by the 2040s, and it'll be like a condom over kindling. So there's that to look forward to.

Posted by Diabolu Frank at 4:29 AM