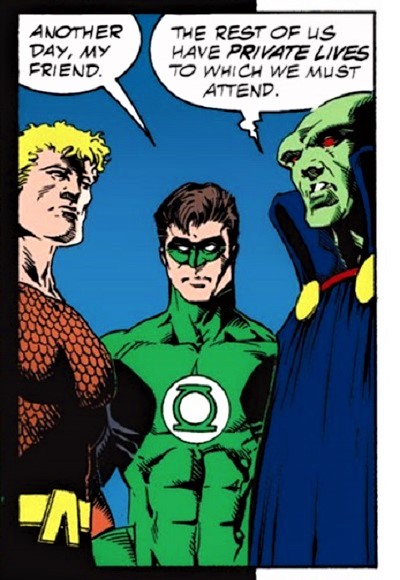 Even though Snapper Carr had been retconned into being a constant presence within the Secret Sanctuary as resident tech wizard and maintenance man, Green Lantern still manhandled the "handykid" as a suspected intruder, and couldn't be bothered to remember his name. Admittedly, the League had been out all night fighting Starro the Conqueror (with a key assist from the already forgotten Carr,) so they were all likely punchy as they raced off to tend to their day jobs. This left Aquaman indignant, as Locus continued to be a threat, and were less likely to be taking the day off. Hal Jordan flirted with FAA investigator Lora Denton, but a slip-up inspired by the distraction of the League forced Carol Ferris to ground him. Barry Allen got held up by chatterbox new detective Paris Jackson and was almost too late to prepare dinner for his fiancé Iris West. Here was a second instance of a hero being caught flat-footed by their significant other when asked about their unaccounted-for activities, and I do wonder if artists ever get tired of redrawing the cover to The Brave and the Bold #28. Aquaman went swimming at Ocean World to check on his "imprisoned brothers," and ended up with hysterical guards screaming and pointing guns at him. The angle continued to be Aquaman as "freak" who doesn't understand social norms, but his concern for sea life tracked with his environmentalist streak since the '70s. Officer Perez of the Coast Guard showed up to defuse the situation, and we learned that in off-hours, he'd exposed Aquaman to Planet of the Apes. There's actually several comedic beats like that in this issue that reminded me how funny the writers can be when allowed, and it's also a nice nod to the JLI. There's a moment when one of the Ocean World trainers sincerely took advantage of the Sea King's abilities to check on the marine life's well-being, and lets just say this fictional amusement park got higher marks than real world documentaries would lead one to believe. 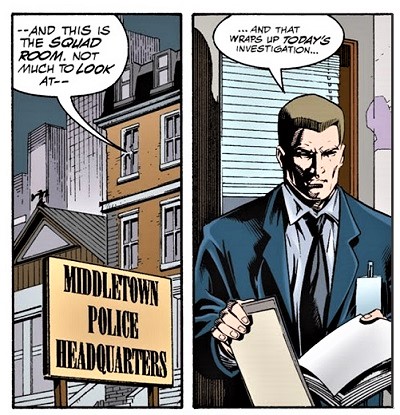 I've never been as into Black Canary as I wanted to be, but seeing Dinah Lance dressed for The Matrix with a raven bob certainly helped bridge the distance in that moment. I wasn't well-versed enough in the DCU to fully appreciate Dinah at a birthday party with the retired JSA in 1998, so it hits harder on rereading today. Still weird to have a female character referred to as "Junior," but maybe that was more of a thing with the "Greatest Generation?" Then-recent Starman material had turned a series of '60s team-up stories with Canary into an extra-marital affair, perhaps too on the nose, but still an intriguing development. Seeing the awkwardness between Ted Knight and the widowed former Dinah Drake, especially once deduced by "Dinah Junior" (weeird) was a highlight of the series. Not going to lie, I did a little fist pump when I saw the sign reading "Middletown Police Headquarters." John Jones helped Diane Meade read her date (Detective Vince Logan) for filth. Meanwhile, Locus had indeed kept busy, securing a Starro tentacle for its regenerative abilities and working with T.O. Morrow & Professor Ivo on promising, under budget projects. They were also plotting mad science to be perpetrated against Blue Beetle as an unwilling "graft donor" captured by the Brotherhood of Evil. They played it coy for most of the issue, but I can all but guarantee you that a stretchy woman and a gorilla in shadow were not cluing me in at this point in my DC fandom. "While You Were Out..." was by storytellers Mark Waid / Brian Augustyn / Barry Kitson, joined by "guest inker" Michael Bair... for the rest of the maxi-series. I'd noticed the richer, crisper ink line from the second page, and Aquaman's face in the second panel of that page was a dead giveaway. That collaboration would continue for a while, and Bair would rightly (see: Infinity Inc.) help define the look of spin-off/begetter JSA with Stephen Sadowski. I'm a fan of Bair's, and only just realized one of my most treasured pieces has a younger sibling. I'd obviously be curious to know what it went for. Anyway, Bair added that touch of post-modern darkness that compliments the writers' efforts, as the creative team textually and visibly references a Silver Age milieu. It parallels James Robinson's work on their Golden Age progenitors, reflecting a period that was always kinkier, weirder, and more violent than the Justice League's time. Bair lends that little bit of edge, but not so much as to tip it outside of somewhat genteel Boomer nostalgia. Still can't believe how talky and decompressed this series was, but I'm grown, so I can dig it. 1990s, Aquaman, Black Canary, Diane Meade, Flash, Green Lantern, Justice League International, Justice League of America, Justice Society of America, Martian Manhunter, Middletown, Retcons,
Posted by Diabolu Frank at 3:42 AM