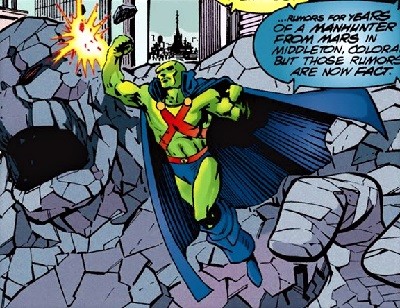 In a darkened room, a series of unidentified individuals watched television monitors with reports of freshly emerging super-heroes the Flash, Aquaman, Green Lantern, Manhunter from Mars, and Black Canary. Notes were taken, specifically locations of sightings. The last images were of J'Onn J'Onzz and the combined heroes, for which no notes were written, of the Appellaxian invasion. "...rumors for years of a Manhunter from Mars in Middleton, Colorado... but those rumors are now fact." In a cringey splash page for Martian fans that doubled as a house ad and store poster, all the Leaguers get their trademark epithets ("The Emerald Gladiator",) even ones unfamiliar and perhaps dubious, ("The Blond Bombshell"?) except "The Manhunter from Mars." To paraphrase Henry Jones, "We named the strip Manhunter from Mars." Stuff like that drove me to create this blog, with preferable canon epithets including "The Alien Atlas" and "The Sleuth from Outer Space." Anyway, it's a personal speed bump on the way to the inspirational "They were young... They were new... and still, they forever set the standard for all who would follow. Ten years ago, five powerful heroes came together... for a world that needed one unbeatable team. Just Imagine."

The League wasn't "official" at the end of their first case, leaving the prospective members to mull the decision in their private identities. Central City Police Department forensic scientist Barry Allen was uncharacteristically impatient and testy, as he's introduced to incoming detective Paris Jackson (less than six months before the more famous bearer of that name was born.) In Star City, Dinah Lance unpacked shipments to her floral shop while discussing the team with her mom. The elder Dinah (née Drake) was maybe putting the mother in "smother," especially when she got a new beat cop named Sherman to promise to keep an eye on her nineteen-year-old "little girl." A mild Canary Cry and numerous busted pots later, the junior Dinah was out the door for her meeting. Aquaman tried to make friends in a rough dock bar, but between his soft-speaking, heavy accent, and costume, he nearly ended up in a brawl instead. Things were calmed down by a kindly Coast Guard named Perez. At Ferris Aircraft, Hal Jordan ignored his buddy Tom Kalmaku's pleas to eject from the experimental $30M X-90 jet (or at least wear his power ring during test flights) in order to impress his boss Carol into a dinner date. Successfully landing, his next step seemed to be sweet-talking FAA investigator Lora Denton, but he fumbled. 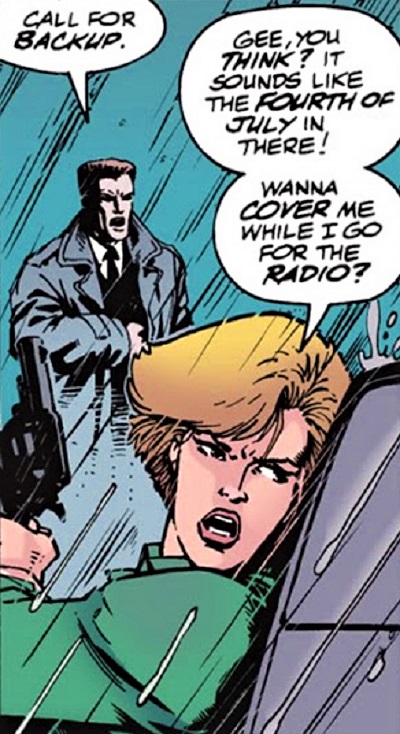 In Middleton on a rainy night, Detective John Jones sat in a parked car with his partner Diane Meade on stakeout. He asked if she thought of him as a trustworthy team player. "God, John. Warn me when you're gonna speak. I'll alert the media. At least clear your throat or something... You're the most curious detective... You have a spotless record, you always get your man... and no other investigator has yet to find your sense of humor. What more do I need to know right now?" Twitch's tip about drug manufacturing at the back of Angelo's Restaurant panned out when armed dealers showed up to punish his skimming off their operation. Jones expressed his lack of understanding about addiction and violence, which the sassier Meade mocked. Pinned by erupting gunfire, Meade called for back-up while an invisible Jones used laser vision to heat the guns out of their hands. As the only armed man present, the suddenly visible Jones could easily arrest the lot. The press arrived before the reinforcements, with Channel Twelve News' Cal Redmond looking for the scoop on this hero cop. The taciturn Jones bowed out to meet with, perhaps, others like himself?

The quintet of super-heroes had agreed to turn over the two surviving Appellaxian battle drones to the Air Force, specifically General Eiling, but a small army of masked and armed individuals were already at the seaside caves where the team had hidden the alien proxies. A battle ensued, with the reawakened fire giant putting J'Onn J'Onzz out of direct action. Black Canary critiqued the heroes by comparison to her "family" in the Justice Society, but included a Golden Age Flash Fact that helped her and the Scarlet Speedster to bring down the also awakened bird giant. When not undermining the only woman on the team, Green Lantern bailed on yellow bird duty to help Aquaman leave the fire giant all wet in a grotto. Jordan was surprised to learn of the Manhunter's weakness to fire, and tried to walk back a faux pas statement of bring sick of these aliens. "You mean no insult. Go. I will shield the soldiers." 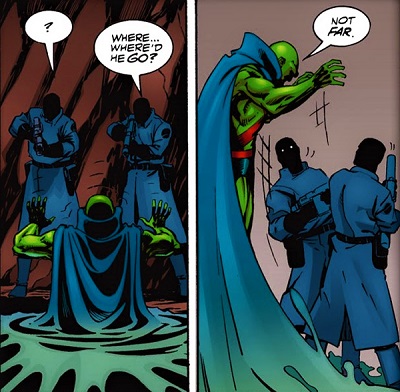 More than that, the Manhunter executed a maneuver that would be adapted to animation in the Justice League TV pilot "Secret Origins." When armed assailants pointed their rifles at him, the Martian disappeared into the ground immaterially, only to arise behind the men and bash their heads together. So much for "The Martian is weak! Quickly! Before the others come to his rescue. --We will reduce him to Martian ash--" Green Lantern noticed, and wondered if his power ring could do that, too? The attackers tried to destroy what they couldn't steal, but were disarmed by the Flash. As a fail-safe, their leader leaped onto the bird giant and had his fellows "triangulate a portmatrix" to teleport them both back to base. General Eiling had ordered his men to stand down for their own protection, and openly admired the super-heroes who'd saved the day (if not the bird giant.)

After the USAF airlifted the fire giant for study, the quintet hesitantly agreed to remain a team to investigate the robbers, by order of Flash, Canary, Lantern, and Aquaman. Only Manhunter offered an unreserved "You... each of you... has treated me as you would one of your own race. You have included me where others might turn away. I am... grateful. I would be honored to join you." Meanwhile, the uniformed members of Locus watched video of this meeting remotely at their base, taking notes on the League's confessions to one another, while their field agents were already in play on the ground to gather intelligence...

"Justice League of America: Year One" was by Mark Waid / Brian Augustyn / Barry Kitson. I grew up on Super Friends, and the first JLofA comic that I remember seeing was 1983's #217 with the George Pérez cover, but it wasn't until the late '80s JLI era that I ever bothered to read any of the things. While I have a fondness for many periods of the property, it wasn't until the 1996 JLA relaunch that the premise finally sung for me, and it was during this period that I truly and eternally became a fan. That half-decade under Morrison and Waid will always be "my" League, and this maxi-series played a big role in that. Since I'd yet to read any but the earliest Detective Comics stories, I had no idea Diane Meade was a preexisting character, and I was still 100% sold on the Post-Crisis Middleton, CO shtick that I'd reject years later.
Posted by Diabolu Frank at 12:00 AM

This was the first book I read out of my pull list when it came out each month, & I was sad that it was not given a year 2 or 3 because the series was so good.