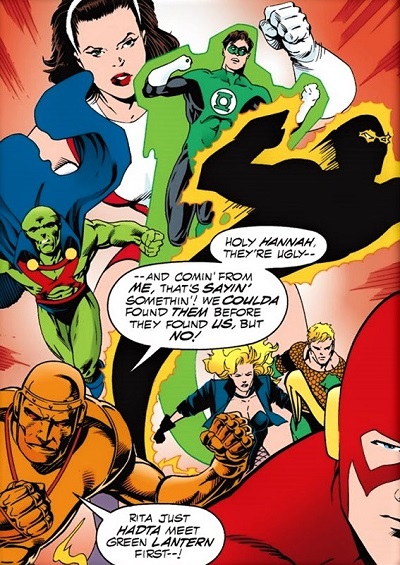 Coast Guard Officer Perez was almost caught in the Secret Sanctuary by Snapper Carr while at the meeting table going through files regarding the League and referencing Locus. Hmm. Speaking of, J'Onn J'Onzz called a meeting to discuss his extensive findings about Locus, alternately geneticists and survivalists, but consistently "ruthless to the extreme." Aquaman was glad that at least one of them was still pursuing the case (conveniently omitting his own lack of said pursuit,) but when Flash wondered why J'Onn hadn't shared sooner, "It did not occur to me to do so." Again, one of the most thin-skinned and stand-offish members questions the dynamics of a team despite contributing to its toxicity. The individual Leaguers continued to struggle with work-life-vigilantism balance, with the recent revelations about her mom's affair prompting Black Canary to pointedly question her teammates' marital status. "I am... Or, rather... I was. My life on Mars was rich with a wife and a daughter. Just before an errant teleportation beam brought me to your world, they were taken from me by a tragic accident. To this day, I sometimes think I hear the song of their laughter in the still night air. I am mistaken." Well, anyway, Canary doesn't want to talk about the JSA anymore. Also, this was a tweak to Manhunter's post-Crisis origin, as he previously still labored under the delusion that the pulp-fueled fantasies of Saul Erdel were his true life on Mars. J'Onzz had embraced this fiction in part to escape the painful reality that his people were wiped out by a plague, not an accident. The then-upcoming Martian Manhunter ongoing series would clarify this while removing all vestiges of the Pre-Crisis/imaginary Mars from the narrative. 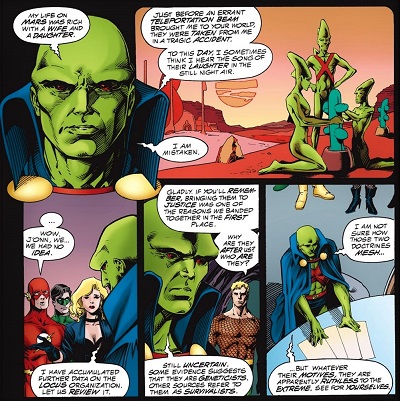 Manchester, Alabama was either so rural that they still waited anxiously for the delivery of stacks of newspapers, or this story was intended to be set in the mid-80s (there's a Reagan reference.) We're so old, you guys. A couple of men were discussing "the Green guy" from the Justice League, and when one thought he meant "The Martian," the other clarified that nobody in the general public ever talks about the Manhunter unless he's a suspect. Then a bunch of citizens were shot with that Locus "genegraft ray" cannon that takes chunks off of people and aggregates those chunks into humanoid purple protoplasmic minions. It's like Gardner Fox trying to do body horror, appropriate to the villainy of The Brotherhood (of Evil.) This unsurprisingly attracted the Doom Patrol, a heroic team of "freak" accident survivors, provoking the public's reticence to being saved by such a lot. The arrival of "matinee idols" the Justice League was more warmly received, and the two teams joined forces against the purple people. However, Manhunter warned "Be careful! My telepathy suggests that many of these creatures are melded to innocent, frightened victims!" It was mostly down to the League to route and contain the monsters, leaving them vulnerable to a blast from the genegraft ray that ripped away their key attributes: Canary's vocal cords, Lantern's ring arm, Flash's legs, Manhunter's eyes, and Aquaman's... um, actually, he hung back with the Doom Patrol. But anyway, The Brain created a new body for himself out of the pieces of Leaguers. The Brain is a super-genius whose brain lives in a motorized jar and leads the Brotherhood. I should have mentioned that sooner. "A League Divided" was by storytellers Mark Waid / Brian Augustyn / Barry Kitson and still "guest inker" Michael Bair. I'd had a few exposures to the Doom Patrol in the past, but never really "got" them. This issue offered me insight that they were influenced by the early, quarrelsome Fantastic Four, but had likely influenced the X-Men, which went a long way toward seeing the potential appeal of the premise. 1990s, Aquaman, Black Canary, Doom Patrol, Flash, Green Lantern, Justice League of America, Justice Society of America, Martian Manhunter, Retcons,
Posted by Diabolu Frank at 2:16 PM

I never understood why Rita Farr was considered a freak in the comics, it made no sense but then when I saw the show I got it.

Yeah, it wasn't until the pre-Flashpoint Giffen run that Rita Farr made sense to me, and they used his work to great effect on the live action show. A different world from where I came from, let me tell you.