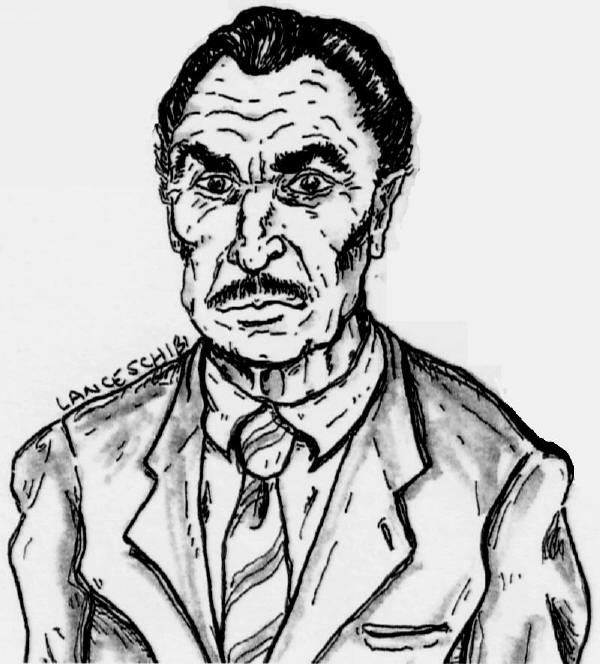 Lance Schibi is the twin brother of our frequently commissioned artist Cody Schibi, and has accompanied him on all his Comicpalooza visits, but I never figured out how to utilize his talents until last year's show. That's when I started experimenting with multi-artist jam pieces, and Lance was one of the first people I talked to, since he typically specializes in heads & busts.

The original plan was to pack a lot of artists and characters into one piece, like dozens, with Lance setting the standard. I also figured the piece would grow up from low/non-powered hoods seen in the early Detective Comics stories up through the bigger dogs higher up the food chain (and page.) We started off with the first quasi-super-villain of the Sleuth from Outer Space, criminal scientist Alex Dunster. Schibi thought the character looked a lot like Vincent Price, who he used as a point of reference. In my own fancasting, I went with Warren Oates, but I love Price and thought the drawing was nifty. Schibi packed a lot of detail into a roughly 2" x 2" square, with some cool gray tone shading that sadly did not survive the scanning process completely intact.

Unfortunately, I was not so hot at offering art direction to successive contributors, and that commission page soon got a bit out of control. The pieces became increasingly larger and less uniform, so that ultimately only six characters fit and Schibi's effort was dwarfed by the rest. I'm glad to have this opportunity to isolate and blow-up Schibi's piece, which is quite probably bigger on your screen than in real life (unless you're on a phone/phablet.) We'll have to do this again, because Schibi started another jam piece for me the same way, and the same thing happened there (to a lesser extent, but still!)

You can check out more from Schibi on his blog and @lschibi, or check out his wrestling themed web comic FOR THE TITLE!
Posted by Diabolu Frank at 12:00 AM