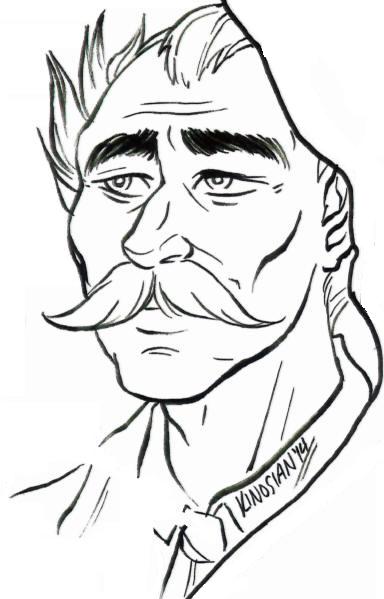 Jamie Kinosian has done a couple other pieces for me, and I hadn't noticed before, but they were both duos, Perkins Preston & Patty Marie and M'yri'ah & K'hymm J'onzz. I never would have thought I'd have gotten two Perkins Preston pieces before ever getting a drawing of the scientist who brought J'onn J'onzz to Earth in the first place!* This one is also interesting because Erdel doesn't inhabit the same space as other characters in the piece, but because of its placement it is more highly integrated into other characters' space than anyone else on the page. I didn't see it at the time, but in retrospect, that makes perfect sense. Erdel died within the first pages of the original Martian Manhunter story, and in one of his last stories as Mark Erdel in the early '80s the previously nonexistent "mystery" of his passing was created and solved. Mark Erdel is defined by being dead, but his legacy was the history of Martian Manhunter's heroism on Earth, and that legacy "touches" all the other characters in the piece. I really enjoy Kinosian's take on Erdel, leaning into the more flamboyant aspects of Joe Certa's design while retaining a real soulfulness. My only regret is that I didn't get a separate solo piece where Erdel could breathe more, as he looks cramped by all the other elements in the jam (many remain here as artifacts, or make their presence known in the gaps where I removed them for this solo spotlight.)

*The second Perkins Preston will probably run this week. And in fact, I still only have this one Erdel, yet I'm now on seconds of M'yri'ah & K'hymm, which feels like an oversight on my part.
Posted by Diabolu Frank at 12:00 AM