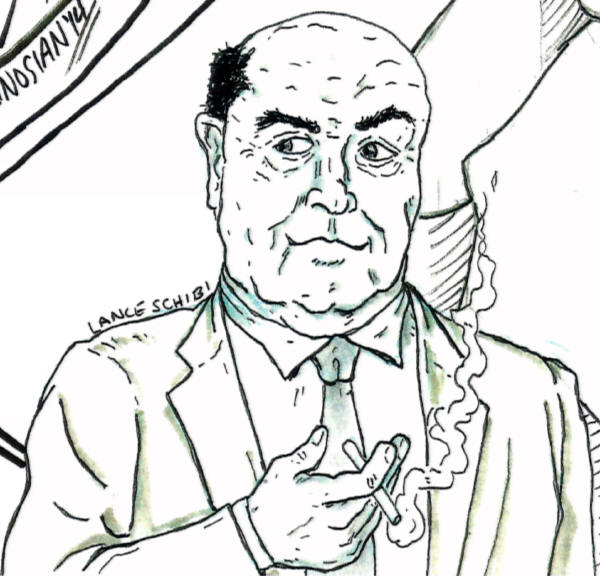 If I recall correctly, I had Lance Schibi do the initial drawings on two separate jam pages, one for friends of J'onn J'onzz, and one for enemies. I think his Alex Dunster was second, because I believe the main character I wanted him to draw was Detective John Jones' original commanding officer, Lieutenant Saunders. Though he only made a handful of appearances in the earliest stories, I liked Saunders, and always wondered what happened to the guy. I offered the character actor Lawrence "Larry" Dobkin as a point of reference since Schibi seems to be a film buff, and that's who I fan-cast in the part, but I think the artist went with a more personal and unique take on the character. Saunders is older here-- paunchier-- a fair few more wrinkles. All those cigarettes that used to unnerve Jones caught up with the fellow. I like to think this is Saunders after he retired to a quieter life out in the suburbs, only coming in to town to visit old friends and catch the odd ballgame at The Vast Stadium.

The image seen here is larger than actual size, and the scan retained Schibi's details and tones better this time. I enjoyed the weathered take, as well as the posing of the hand. You can also see a lot more artifacts from later artists in the jam, who better maintained the proportions than on the villain piece. Those will be unveiled in due time, in part because I had characters added to this jam at two additional shows and still want to squeeze in at least one more in the tight space remaining. What can I say? J'onn's got a lot of buddies!

You can check out more from Schibi on his blog and @lschibi, or check out his wrestling themed web comic FOR THE TITLE!
Posted by Diabolu Frank at 12:00 AM