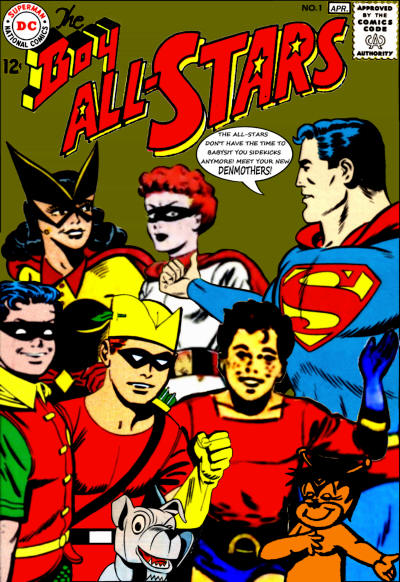 After the success of The All-Stars, Jack Schiff ran into a bit of a problem with where to go next. The Aquaman and Green Arrow solo books had done well enough, but not gangbusters, and neither World's Finest's Robotman feature nor Detective Comics' Manhunter from Mars seemed poise to follow their leap. More troubling, despite the super-hero boom, the Batman books had yet to recover the ground they had lost in the '50s. As a team, Schiff could boast of having All-Stars, but not so much when taken individually. Letterhacks and other editors had floated the idea of creating a group out of the All-Stars' sidekicks, so Schiff began developing the concept as a revival of the Boy Commandos. However, Schiff had concerns about portraying the kids as child soldiers in the less innocent Vietnam era, and decided to instead strengthen the connection to the parent book with the simple "Boy All-Stars."

Robin, Speedy and Aqualad were givens, since all three were visible through their mentors' books. That would serve as a good core line-up, but as with The All-Stars, why waste an opportunity to spotlight other characters? Wanting the boys to have pets and allow Schiff's current strips increased exposure, Robbie the Robotdog and the newly created Zook were added as supporting players. The Boy All-Stars would learn lessons of camaraderie, leadership, morality, community service, and even practical application of science, all fitting with Schiff's progressive ideals as taught through the team's adult chaperons.

On the cover of the first issue, Superman declared "The All-Stars don't have the time to babysit you sidekicks anymore! Meet your new denmothers!" While Batwoman and Merry the Girl with 1,000 Gimmicks did indeed put the boys through their paces in the book length debut story by Arnold Drake and Chic Stone, most of the adult All-Stars would take turns guiding the wards. However, a rule was put into place that no mentor could watch over his own sidekick (to avoid favoritism,) so Robin had to stay home with Alfred in Batman stories, Speedy became a latchkey kid when Green Arrow supervised, and so on. At two adventures per issue, this cycling spiced up the edutainment, plus it created interesting sub-groups. 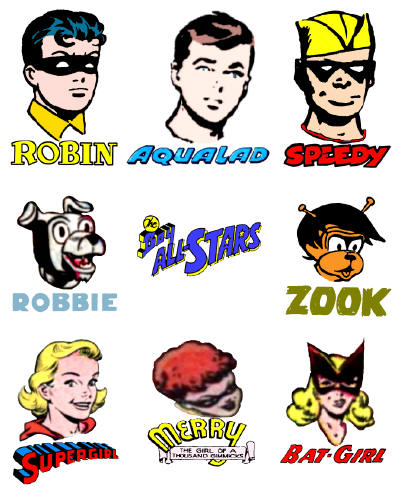 Each issue's twin stories were treated like anthology material by Schiff's regular talent pool, including writers Jack Miller, Dave Wood, and Arnold Drake, as well as artists Howard Purcell, Jim Mooney, Win Mortimer, Bill Ely, George Roussos, and Paul Parker. In 1964, Bill Finger, Sheldon Moldoff & Charles Paris began routinely producing the lead story, with occasional back-up sprucing by the likes of Bob Oksner and Alex Toth. It was Finger who brought back Merry, who'd disappeared after the first issue as a mentor, only to return as a teen peer in the Liberty Belle-led stories. Robin was never allowed on any Superman or Batman groups to avoid conflict with World's Finest Comics, resulting in Bat-Girl being the first female to officially join the Boys. When the "secret weapon" Supergirl turned up later, it was sporadically, and for some reason she only appeared in Martian Manhunter and Spectre chaperon stories (later acknowledged in stories from 1977 & 1981.) Green Arrow favored smaller, less powerful groups, while Doctor Fate herded most every "Boy" in his epics. Joanie Swift had the fewest appearances, a guest mentor in only one story, while Zook was the most consistent presence overall, especially late in the run after he was abandoned by his master's strip.

The early success of Boy All-Stars led to an odd short-lived feature in The Brave and the Bold called "The Teen Titans," in which Kid Flash used the Cosmic Treadmill to travel through time to team-up with Superboy and Wonder Girl for fun, just the sort of silliness one would expect from Bob Haney and Ramona Fradon. It seemed like there was a limited market for teen heroes in general, with sales on Boy All-Stars declining as civic service went out and civil protest came in, leading to its cancellation in 1968. Most of the sidekicks were phased out of publishing as a whole in the 1970s, and many were killed/wiped from continuity during Crisis on Infinite Earths. Stars Robin & Supergirl came out of that mess okay though, while a travel worn Robotdog still roams the streets alongside Robert Crane, and Zook turns up now and again. May the rest of those swell kid heroes continue to frolic in the great beyond!
Posted by Diabolu Frank at 12:19 AM

I am enjoying this alternate continuity. I think that this would have been an interesting comic.