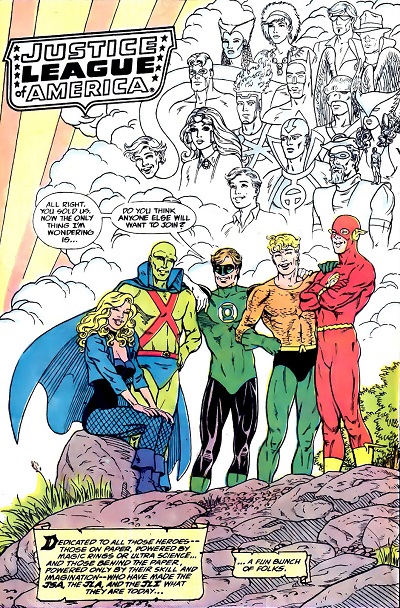 On the planet Appellax, whoever kills the world's leader succeeds him as the new kalar. With seven total claimants, the dispute could only be resolved through trial by combat, and impossibly destructive proposition. Instead of sacrificing 85% of their world to devastation, as occurred in the previous contest, it was decided to play out the scenario on the backwater world of Earth instead. The contestants would have their minds transplanted into various battleforms, and the last one standing would become kalar.

J'onn J'onzz flew over his city, wondering how people would react if he revealed his true Martian self, as he was tired of spending his life invisible or disguised. However, he spied stone statues littering the streets, and was discrete in checking them out. He realized these were not statues when he saw two police officers that he recognized in their midst, and heard the thudding footfalls of a stone colossus. Eyebeams from the battleform were petrifying people, so the Manhunter attempted to put a stop to it. Telepathy was particularly ineffective, as its overwhelming evil pained the Sleuth from Outer Space. The stone Appellaxian began taunting J'onzz, as the attempted probe had backfired, revealing J'onn's secrets-- including his weakness to fire! Sparks from stony fingers against a demolished gas station ignited an explosion, but J'onzz saved himself by landing on a fire hydrant. He briefly considered waiting the flames out, but recognized the continued harm the colossus would do in the meantime. Focusing totally on launching himself like a missile, the Alien Atlas flew through and exploded the proxy body of the Appellaxian. Waking up on the street, J'onn was not greeted by fear or anger, but the bemusement and incredulity of the citizens he'd saved. The mind probe had alerted Manhunter to the other invaders, and he set off to stop them before they could hatch from their cocoons.

In turn, Aquaman, Black Canary, Green Lantern Hal Jordan, and The Flash had faced their own battleforms. Likewise, each had been captured at the site of a sixth Appellaxian cocoon, turned into trees. Or as Barry Allen put it, "I feel like such a sap." The quintet were to march from Florida to Antarctica to help the wooden Appellaxian confront the remaining battleform. Luckily, Aquaman used his telepathy to break the alien's control to trigger a domino effect of super-heroes using the smallest measure of their remaining power to free parts of one another. This culminated in the entirely freed Flash turning the Appellaxian into toothpicks. The Manhunter asserted that there was no time for self-congratulation, and thought it logical to stick together, so Green Lantern used his power ring to fly everyone to the final invader. 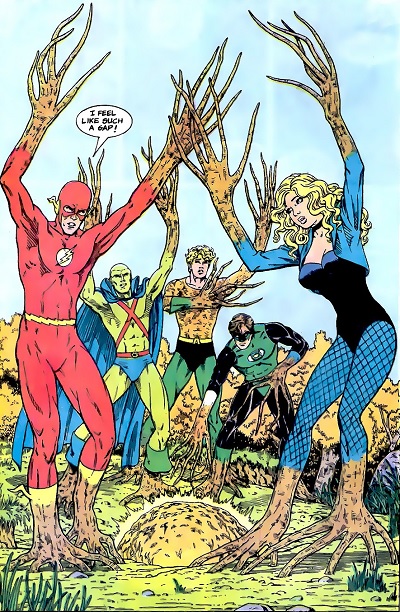 The Martian noticed that the Lantern was the only hero entirely at ease with his presence, having seen more than his share of extra-terrestrials. The fast friends started calling each other by their first names. Up ahead in the frigid wasteland, "By Tarkas! Gentlebeings... we've been upstaged." Superman had destroyed the battleform and flew off without even noticing the approaching heroes. Dubious, given his super-senses, but we'll go with it. Despite the anticlimax, the Flash thought that it would be a great idea to stay together as a proper team. J'onn hated it, as it would necessitate going completely public. Still he was eventually convinced of the good they could do, "And it would be good to have... friends." Besides, it would be excellent P.R. for the Martian's coming out. Inspired by Black Canary's Society ties, they became the Justice League of America.

"All Together Now" was by Keith Giffen, Peter David, and Eric Shanower. I once asked David why he didn't do any more JLI-era material, since this was a swell story with an appropriate sense of humor for the time. Sadly, he was never asked, aside from a two part JLTF. The art nicely conveyed a Silver Age vibe, as well. Nearly three years after Crisis on Infinite Earths, with lots of weird and vague potential line-ups offered (such as in Secret Origins #29,) the answer to who exactly founded the group under the revised circumstances was finally decided. Taking its basic plot from the first team origin story from 1962's Justice League of America #9, Wonder Woman is swapped out for Black Canary and Batman is omitted entirely. While the World's Finest duo were late additions to the team and the tale the first time, here Superman is reduced to a cameo without interaction with the team at all. I really like the quintet model, at least for the early founding members (favoring Diana over Dinah, but still...)
Posted by Diabolu Frank at 12:00 AM

It's in my head canon that Dinah was a "junior member," because she was literally underage at the time, so she wasn't publicized.