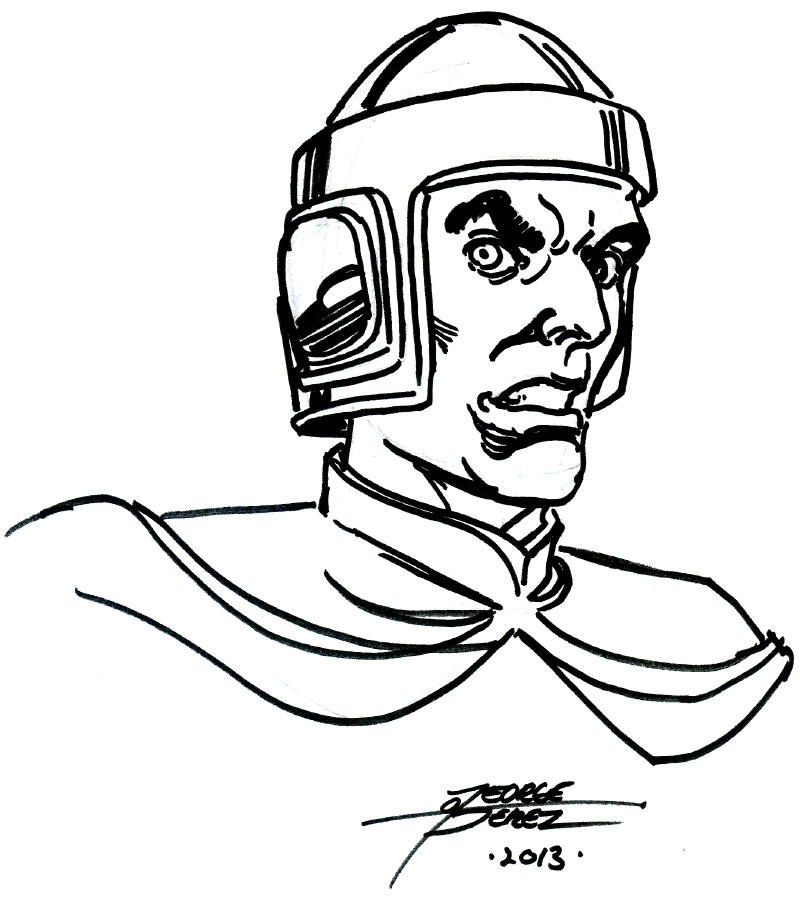 As I've mentioned in past posts, I was psyched at the prospect of getting a George Perez commission, until I read up on the possibility online and learned that the likelihood of pulling a full figure at a convention was pretty close to nil. That's a shame, because I would love to get a complete drawing of Commander Blanx, the original killer of Mars, by an old school master. Blanx managed to rate a mention on the biography card for the 1985 Super Powers Collection Martian Manhunter Action Figure, as well as the Alien Atlas' 1986 Who's Who entry, but has never had a listing of his own anywhere (not even those big DK encyclopedias.) I have sad dreams of putting together a period style facsimile page for the ashen annihilator, and having it drawn by one of the Gods of Comics would be the cherry on top. Alas, it was not to be, but maybe Luke McDonnell will come to town someday for authenticity's sake?

Moving along, I had heard different things about how Perez allocated pieces, none of which panned out with my experience in Houston. The most likely option was a lottery system, but on Day One, I stood in a line running a couple dozen feet without any sign of tickets or even movement. Guys were bringing whole longboxes for the artist to sign (which I have no patience for,) and I had a long list of commission from other folks I needed to get started on, so I got off. I saw tickets passed around on Day Two, but I arrived late, and the line was more like 100 feet long. I figured I'd have better odds arriving early on the final day, instead. I'd arranged all the other commissions I could, and brought a run of the Nick Spencer T.H.U.N.D.E.R. Agents series I'd pulled from a dollar box, prepared to hunker down and read in line for as long as it took to get me some Pérez. I finally got a ticket after finding out the Comicpalooza system: Each ticket was sequentially numbered, and determined in which order a sketch could be acquired. You could step out of line and do your thing, then return at any time that day. If your number was the lowest present, you moved immediately to the front of the line. However, the ticket was only good for one day, so guys who tried to collect from a previous day's ticket were admonished and had to collect an entirely new ticket. Every person who followed the rules got a sketch for a reasonable price, about $40 with some variances.

The line was moving fast enough that day that I gave up on reading after 1¼ comics. Instead, I chatted with fellow fans, including a guy whose daughter was dressed as Robin, and had received a sketch on her cape from Perez. When it was my turn, I watched the maestro do a minimal pencil outline (contrasted out of the scan) on 9" x 12" sketch board, then produce this bust inside five minutes with a Sharpee. Typically, when I watch a piece done, the artists are closer to how I do things myself-- working and reworking until the drawing suits. Pérez is one of those geniuses you see in YouTube videos who confidently work from abstraction to perfection, his hand never hesitating from start to finish, a crystalline image in his mind transcribed to paper as if by rote. It's appalling how easy he makes it look, but what would you expect from a four color deity?

I made some small talk about how an issue of Pérez's Logan's Run was one of my first comics, and a New Teen Titans was one of the earliest books I ever bought for myself. I marveled as he cast aside the reference I provided with barely a gander before illustrating Commander Blanx with as true and accurate an expression of the villain as Dick Dillin ever drew, but done with the panache only Pérez could bring. As it turned out, Pérez did uncredited inks for a lot of Dillin Justice League of America backgrounds during the Bronze Age, though he had admittedly never drawn Commander Blanx before. God willing, he'll do so again though...
Posted by Diabolu Frank at 12:00 AM

Very nice.
And makes me think I am going to try for a Perez in Boston!

I really like this piece of art, as it is very animated. It looks like Commander Blanx is in the middle of plotting something or getting ready to give a big speech.