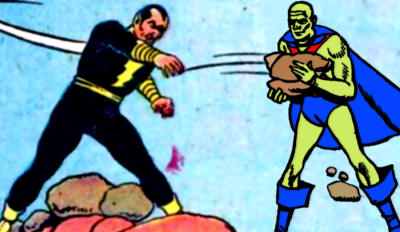 Bio: B'enn B'urnzz is a criminal from the future who fled justice in the year 2062 by traveling back in time to the present. He then wrecked havoc as part of a crime spree alongside a human gang until he was stopped by J'onn J'onzz and returned home.

Bio: Teth-Adam was a champion empowered by the wizard Shazam in ancient Egypt. Corrupted by his power, Black Adam was banished to a distant star, and spent thousands of years flying back to Earth. Once there, he battled the Marvel Family, and eventually, much of the rest of the DC Universe.


Idol Speculation:
Both B'enn B'urnzz and Black Adam were one shot villains who served as dark mirror images of a hero, but from a different time, and each fought their foes to a standstill before being defeated through a weakness they shared with the hero. B'enn B'urnzz was subdued in a ring of fire, while Black Adam was tricked into saying the magic word that made him human, then rapidly aged to death. The difference is that Black Adam was resurrected a few decades later, kicked around for a few decades more as a Shazam antagonist, and then in the last decade became a bloodthirsty juggernaut in the upper echelons of the DC hierarchy. B'enn B'urnzz has yet to resurface over these past 51 years, and while he performs well in our annual March Madness contests, he's got an awful lot of catching up to do in competing against Black Adam.
Posted by Diabolu Frank at 12:00 AM

These are two foes that are evenly matched in many ways. One could argue that Teth Adam has done far more harm, as he has been used a lot more often. I will have to think of who to favor as a foe for J'Onn. I suspect that if B'enn B'urnzz would be used again (unlikely, I suspect) his back story would change.

I think there's a good fight to be had between B'enn and Adam under pre-millennial terms. Since 2000 though, Black Adam's growth in power and relevance rather eclipses B'urnzz. They have enough in common to make it a fun question to pose, but the ultimate outcome of an Black Adam victory is to my mind never really in doubt. Sometimes, just plausibly keeping company with a big name DCU villain is a victory unto itself for a member of the Vile Menagerie.

Frank, I cannot see the poll, but I would suspect that Black Adam would live based on much more experience at being vicious. He is a bigger name villain and is a better strategist than B'enn B'urnzz. So, Teth Adam gets my vote -- even if I suspect B'enn B'urnzz might do some lasting damage.

Frank, the photobucket images for this are gone and I am seeing gray boxes with a photobucket ad. (Look who's popular.)

Will, it was worse yesterday. It started Monday evening, and put me off posting until Tuesday morning, when I spent a couple of hours moving recent and scheduled images to a new account. As it says, after 5 1/2 years of accumulated scans, they're finally getting enough regular views to eat up my free bandwidth. It's kind of lame, because opening an additional account is as easy as coming up with a new email address. I don't see the point in moving everything over with five days left in the month. New scans should be visible from now on, and the old ones should be back online in July. It sucks and I'm sorry, but "free" bites us on the butt sometimes.

I'm guessing you've got some kind of firewall that interferes with the polls. I can view them fine with IE & Firefox, but maybe I should try another polling option in the future for greater accessibility.

I used to get peeved by low voter turn-out our polls. I came to understand based on a consistency of trends that when that happens, it's usually because readers are too honest to vote for a character they like against a superior force, but also dislike turning on said character(s) in a no-win situation regarding folks they like, so they abstain.

B'enn B'urnzz ultimately received only one of six votes, as Black Adam took 83.33% of responses.