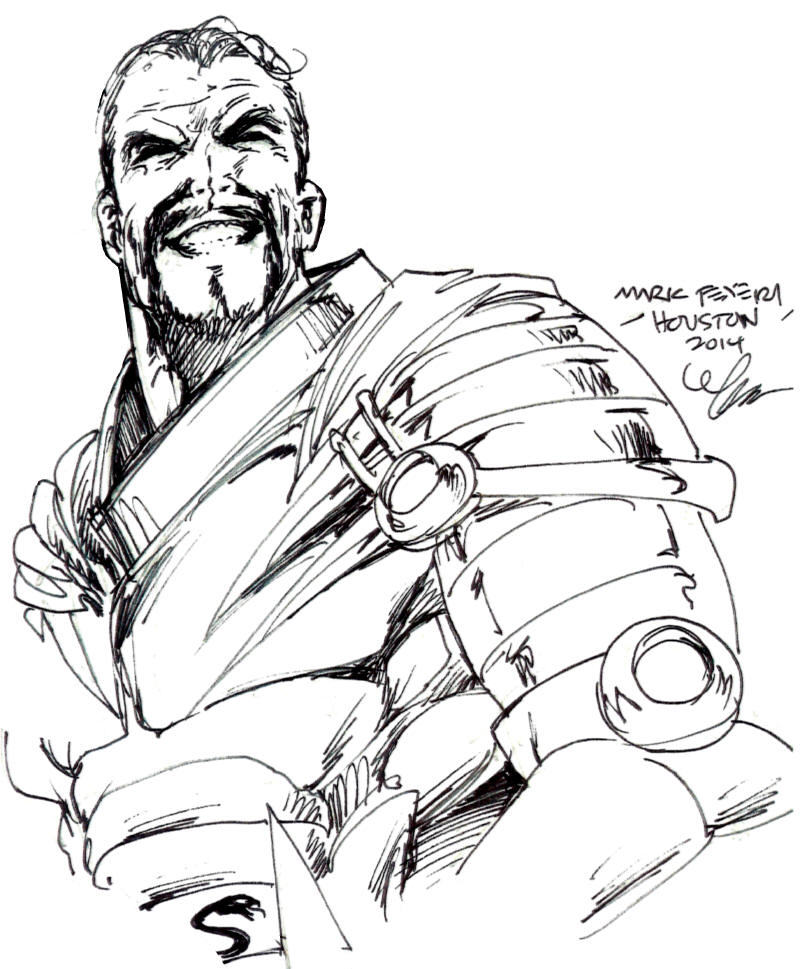 I probably first encountered Mark Texeira's art during his very brief run on Warlord, a book I only bought for a short time as flea market cheapies, but I didn't really take not of him there. His art may have influenced my purchases of Buckaroo Banzai #1 or some issues of Sectaurs, but I don't specifically remember it being a draw. The first time I really took note of Tex was his very cool Mad Max style promos for Hex, and a became a fan while collecting Psi-Force mostly for his work. That was one of the only New Universe books I bought off the stands, and there was one particular splash (I think in issue #5) that I stared at in awe-- one of the most exquisitely rendered images I'd ever seen up to that point. There was a fill-in on issue #6, and I not only felt cheated by the bait & switch of a Tex cover, but it made me realize that I wasn't very interested in Psi-Force stories unless he drew them. His final issue on interiors was #8, so it was my last monthly purchase as well. Tex disappeared on me for a while after that, but when I saw he was drawing an issue of Stalkers here or Night Breed there, I bought them. Punisher? Ghost Rider? Wolverine? Sabretooth? Union? If Tex was there, I'd follow, and be happy about it if only for the art. Of course, I preferred it when he was on books with scripts and characters I could also enjoy, like Black Panther, but the fact is that Tex is one of my top five favorite comic artists of all time, and one of the very few I'll buy regardless of title. I just bought a skimpy IDW trade of A Hero's Death, but Tex painted it, so I'm there.

When Mark Texeira was announced at Comicpalooza, I was extremely excited and hopeful to pick up a piece or seventeen. I looked everywhere for him at the show, and my heart sank when I couldn't find him. Hours went by, and I'm not even sure I ever located him on Friday. However, on one of the days, friends pointed out to me that he'd ended up in the celebrity autograph section I spend very little time at with a makeshift banner. I was like, "WHERE? SHOW ME!" Sure enough, there was Tex with a respectable line in front of him. Which I promptly joined with no intention of leaving until I'd talked to one of my illustration idols.

They say, "never meet your heroes," and I've unfortunately experienced the wisdom of this expression firsthand. Some of my favorite creative people have disappointed or frustrated me in person, in some cases permanently diminishing or outright quashing my affection. Blessedly, this was not the case with Mark Texeira, a larger than life figure with a perpetual smile and no shortage of conversation. He never stopped telling stories, drinking, eating, laughing, drawing, coloring-- even if you weren't into comics, his presence was so warm and inviting that you'd still want to hang around him. I'm so happy and so relieved that one of my favorite creators in this medium also ended up being one of my favorite people, too!

As for this specific piece, it was part of my first attempt at a jam that totally got away from me. By the time it got to Tex, the scale was all out of whack, so what I really needed was a nice, big, beautiful central figure to tie everything together. Tex asked first if it was okay for him to go nuts, and I assured him that yes please take up as much space as you need to make the best piece possible. I wanted a character as vital and lusty for experience as Tex, so Vandal Savage seemed a perfect fit. Despite the immortal tyrant being one of my favorite comic book villains, I'd never gotten a drawing of him done because I'd never found an artist that inspired me to shell out my own money on a character already well represented in print. Savage was a relatively minor direct foil for Martian Manhunter, really more of a threat to incarnations of the Justice League J'Onn had served on, but I didn't let that get in the way of devoting a spotlight section of this blog to him. Texeira was such a perfect fit for the villain, and even drew him in his pain-in-the-ass armor from the JLTF period I like so much but never wanted to inflict on anybody. I love this commission, and am grateful to Tex for doing an even better one for me afterward...

Mark Texeira
Posted by Diabolu Frank at 12:00 AM