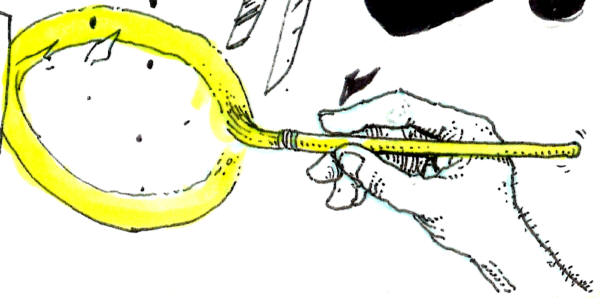 I don't know what's harder to believe... that it's been two years since a Cody Schibi piece has appeared on this page? That this small 2016 image was the capstone of an artist jam started in 2014 by Schibi? That I've spent two years trying to celebrate the sixtieth anniversary of the Martian Manhunter from lead-up to fade out? That this year also marks the twentieth anniversary of my "officially" becoming a fan of the Sleuth from Outer Space, and therefore have spent about eighteen years off and on building web sites and the like to raise awareness of the character's sphere?

By the end of this month, J'Onn J'Onzz will be sixty-one years old, and regardless of my disappointment in not celebrating his 60th birthday to my full satisfaction, I have to put that matter to rest. I worked very hard, gave up a lot of time, and laid out a lot of dough on the stuff I did get done, like the roughly four hours worth of collected audio in The Martian Manhunter anniversary special podcasts parts 1 and 2, interviews with John Ostrander & Mark Verheiden, The J'Onzz Family Portrait Artist Jam, the JLMay crossover, and appearances on The Secret Origins Podcast: Martian Manhunter & Justice League, plus Justice League International: Bwah-Ha-Ha Podcast. I didn't get everything I wanted done, and maybe should have labored less on individual projects in favor of getting a multitude of smaller ones accomplished, but I feel I and my Martian friend still have plenty to be proud of. Also, this September will be packed with daily goodness, including an awful lot of deferred commissions, long form podcasts, and other goodies you'll have to wait for. We're going to have a good time firing up the Idol-Head of Diabolu one last time for an entire month before settling into an intended monthly podcast with odds and sods for the blog. I hope ya'll will enjoy and come back regular like until the festivities close.

As for today's piece, it's the Evil Mystic Brushes from House of Mystery #150 (April 1965), a pair of enchanted art supplies whose monstrous "Supernatural Masterpieces" come to rampaging life! There are a bunch of other Diabolu-cal beasties in this jam, and it could be argued they all manifested from this brush. At the very least, the Color-Ring Creature from House of Mystery #148 appears to be making a cameo appearance at its pleasure...
Posted by Diabolu Frank at 12:00 AM

Glad to read something new from you about J'onn.

You did so much for the anniversary (the interview specials were unbelievable) that I can't imagine what you wanted to still do!

You could always wait for the 65th anniversary to wrap things up.

I'm hoping I'll have grown up by then...