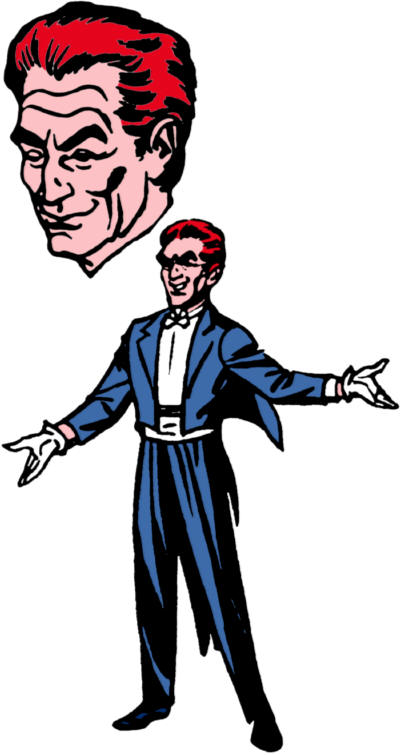 History:
The famous impersonator Porto had a traveling stage show where he would thrill audiences by rapidly changing into outrageous costumes and performing stunts involving impressive special effects. Among his roles was a "Human Fly," wherein he would dress as a known burglar and adhere to surfaces through unrevealed means. As it happened, the otherdimensional being Zook had been present during the Human Fly's last quarter-million dollar heist in Middletown, and during Porto's performance, Zook's powers verified that they were one and the same. "The Human Fly" was assisted by cohorts who had imperiled innocent bystanders with a runaway 20 ton truck as a distraction to the pursuing Manhunter from Mars. While Zook and J'onn J'onzz were on to Porto, they still needed to draw out his criminal assistants. To this end, they captured Porto and secured him in an isolated shack while the Sleuth from Outer Space used his shapeshifting powers to assume the actor's form. As Porto, J'onzz would perform the stage act and await contact from his gang.

Porto wore a functional silver bullet charm necklace, which he was able to deconstruct and withdraw the gunpowder within. Zook had been assigned as a guard outside the shack, so when Porto smashed a window, the alien hero raced toward him while using his powers to emanate heat. Porto threw the gunpowder at the red hot Zook, sparking a small explosion that knocked the imp out. Porto then met with his game and conspired to assassinate J'onn J'onzz while he was in Porto's vulnerable form.

Zook recovered and traced Porto to the theater in time to create a barrier of heat between the disguised Martian Manhunter and silenced bullets fired against them. Zook then attempted to tackle Porto, who successfully brushed him off and made his way to a dressing room. There, Porto changed into a "Bird-Man" outfit and tried to fly through a skylight in the theater. His escape was halted by the Martian Manhunter, who then took Porto and his men into custody.

Powers & Weapons:
Porto possessed a number of costumes that appeared to afford him superhuman abilities through unrevealed means, although they appeared to be technologically based and embedded in the individual costumed. As "The Human Fly," Porto could scale exterior walls with ease, theorized as being enabled through powerful unseen suction cups by John Jones. As "Bird Man," Porto wore a jet pack strapped to his back that allowed him to fly, and he was also capable of flight through a small rocket ship while in astronaut garb.

Quote: "And now-- now we're going to that theater- and finish off that Martian lawman while he's still on stage, stealing my act!"