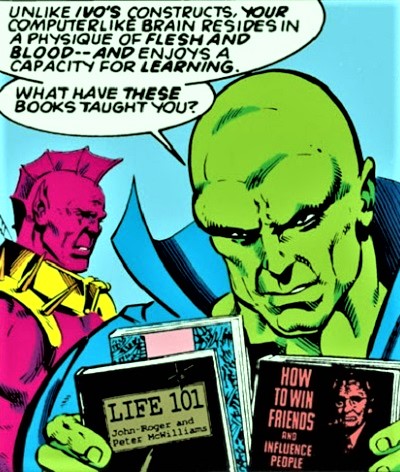 After the Overmaster and his Cadre's supposed "Judgment Day" upon the Earth and the crisis in time dubbed "Zero Hour," a mass of loosely affiliated heroes were left to determine what would be the future of a team claiming the title of "Justice League." Having recently led an IMF-style special missions force of metahuman agents selected on a case-by-case basis, J'Onn J'Onzz saw a more important objective to be met by a permanent roster.

As writer Mark Waid told Wizard Press in 1994's Beyond Zero Hour: A Comprehensive Look at DC Comics, "J'onn J'onzz's take is he is the only surviving member of the Justice League still with the team, and he remembers the days when there were five of them, fairly new and fairly young at what they were doing. So he recruits several young characters and essentially becomes their mentor and is teaching them the ropes of what they are doing. He recruits Gypsy, who has been a member of the team off and on for a while. He recruits the Ray, who is our only big name in Justice League Task Force, and he recruits Triumph, who is a shakeout of Zero Hour continuity that survived the Zero Hour ravages. Triumph was actually a member of the team that was to become the Justice League of America. He was there for their very first case, and because of what happened in that case there was a time blip that removed him from history. He has now been brought back into the time stream walking around going 'Hey, I was a charter member.' And no one remembers him, including John. So here is a guy who has been yanked completely out of time... He was supposed to be the first and the best in the current heroic age; that was his destiny. He was a rookie then who, because of this case, was cheated out of a chance to make a name for himself, and now when he comes back, he is still a rookie, but the world is much different." 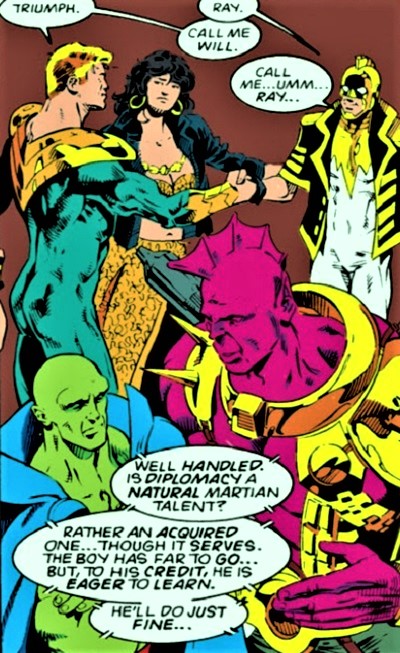 Waid continued, "John's team has taken up residence on an island off the coast of the Carolinas. We pulled this out of my first Justice League story, which was Justice League Quarterly #5, a story in which Professor Ivo, who was the constructor of Amazo and a big robotic building, had constructed his own island... and had populated it with robots and storefronts and made his own little town. It is the perfect training ground for a bunch of young heroes because it is like their own little Hogan's Alley-- the FBI's training ground. There are all these lifeless robots running around, so there is no threat of danger, but they can really cut loose with their powers in real war situations." As J'Onn J'Onzz himself put it, "In memory of the late Ice, who cured him of his freakish grotesquerie and reformed him, he bequeathed this isle to the League. Given its wide-open setting, I believe it to be the perfect training ground for the League members of tomorrow."

Despite his cavalier attitude toward the robots of Ivotown, J'Onzz's first recruit into the new JLTF was L-Ron, formerly a sentient robot whose electronic mind had been imprinted over the brain of Despero, "the galaxy's greatest scourge." The incredibly powerful fuchsia fascist's alien body could now be re-purposed for justice. Next came Triumph, who was living in a Colorado cabin provided by J'Onzz until he could figure out life in the modern world. In Chicago, Gypsy had taken up with Bronze Tiger, and had serious misgivings about working with J'Onn again, yet still joined. In Philadelphia, the final recruit was the light-energy powered Ray.

"The Gathering" was by Mark Waid, Sal Velluto & Jeff Albrecht
Posted by Diabolu Frank at 12:00 AM

I enjoyed this run