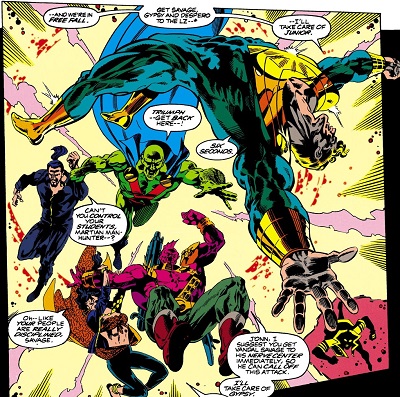 Traveling as a group to Ohio, where Savage maintained a secret yet sprawling and opulent base, Triumph & the Ray pretended at immature squabbling while clandestinely surveilling the operation. Gypsy strained at repeatedly being left along with L-Ron/Despero, and questioned how and why she would choose to remain on a team with him. J'Onn J'Onzz passively humored Vandal Savage's biographical orations and macho posturing over his willingness to kill the Manhunter's charges over their transparent and unauthorized spying gambit.

One of Savage's average Joe office workers went rogue, trying to gun down Gypsy in a bathroom stall. Ray & Will followed an access tunnel to Cleveland, where they found highrise offices of Savage had been vandalized with a giant red hourglass symbol. Investigating the active workplace, Triumph was still trying the catch up with the master plan of the immortal. The Ray questioned, "Triumph-- what if Savage is a tuna sandwich? ...I mean, what if the guy is a lame? Y'know-- thick. A tune sandwich." Triumph protested the observation, just as he failed to listen to Ray's warning that the only locked desk drawer in Savage's office wouldn't be booby-trapped before tripping an explosive.