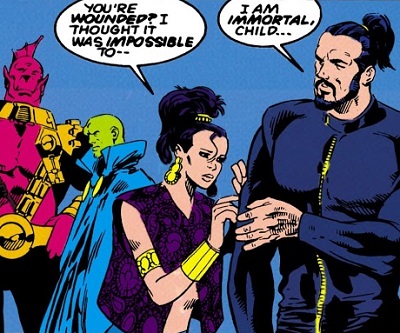 Gypsy teased "The Martian's a little too hip to fifties cop shows," and in the privacy of her room, talked to her dead parents about her friends and recent choices. "J'Onn's looking out for me. He's no you, Dad. But not for lack of trying. He's a kind man. Wise... but a little dusty on affairs of the human heart. He must know I'm mad that he drafted me onto a team with Despero..."

Numerous attempts were made on the life of Vandal Savage by a paramilitary group, so the immortal villain made his way to the JLTF for help. He kept a list of his descendants/future organ donors which had been compromised. Since the Justice League owed him a favor following "Judgment Day," and the people on his list were imperiled, he called in his marker against the heroes.

i'm putting this blog as my homepage

I doubt it's worth all that, but hope you enjoy this month's offerings, at least.