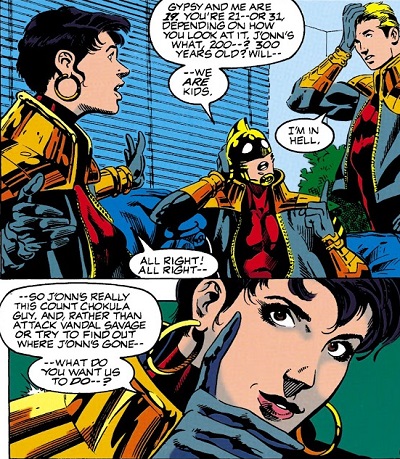 "Savage is a powerful and ruthless foe... and we embarrassed him. He will go to great lengths to avenge himself." In the rubble of the building from which the entire young team escaped unscathed ahead of an explosion, Triumph yelled at the holographic projection of their immortal enemy, who responded, "I trust I've made myself clear, Martian Manhunter... [Your interventions] have earned you my enmity. I shall make it my driving ambition to be a worthy foe. The destruction of your headquarters here on Task Force Island has been a down payment. Be grateful I did not destroy the entire island. Next, alien, I shall destroy your children." With that, J'Onn J'Onzz flew away, without saying a word.

Despite Triumph's stated intention to, "Move on. Chapter two," and lack of concern for J'Onn's hurt "wittle feelings" on the matter, Will was indignant over this silent dismissal. Since he was technically still living in J'Onzz's Colorado cabin, he decided to investigate his benefactor to uncover his secret true identity. In the weeks he'd lived there, Triumph never bought into the place's "Andy Griffith homeyness," or why an alien would hew to 1950's bourgeoisie decor like a "Lazy Boy" recliner. Speaking of such, Gypsy found documents hidden in the hollow center of a globe of Mars related to a person named Baron Üman Von Mauler. Triumph was convinced that this was really J'Onn, brokering a land deal in Kentucky for a new headquarters, and wanted to show him up. Gypsy repeatedly protested this invasion of J'Onn's privacy, but was also desperate for an excuse to back peddle on her announced departure, as she had nowhere else to go. While the Ray had more important matters needing attending, he always seemed to go along for the JLTF ride, even if it meant a trip to Kentucky.

Triumph orchestrated a game intended to expose and shame Von Mauler, employing Ray and Gypsy as role-playing pawns. Except, Von Mauler isn't J'Onn, but he is very old (sometimes) and rather dangerous (consistently.) Before long, Ray is trapped in an airtight room that saps his energy powers, while Gypsy is beaten and subjected to unwanted sexual advances...

"Chokula" was by Christopher Priest, Sal Velluto, Andrew Lepoy, Mark McKenna & Mick Gray. For the record, Cindy & Ray's ages are revealed to be 19 in this story, and Will's 21. The majority of the issue is a Mad Magazine-style parody of Francis Ford Coppola's 1992 film Bram Stoker's Dracula, with Winona Ryder & Keanu Reeves swapped out for two of our heroes to confront a very Gary Oldmanesque pseudo-vampire (who to this day is the closest thing Gypsy has ever had to an arch-rival, Despero notwithstanding.)
Posted by Diabolu Frank at 12:00 AM