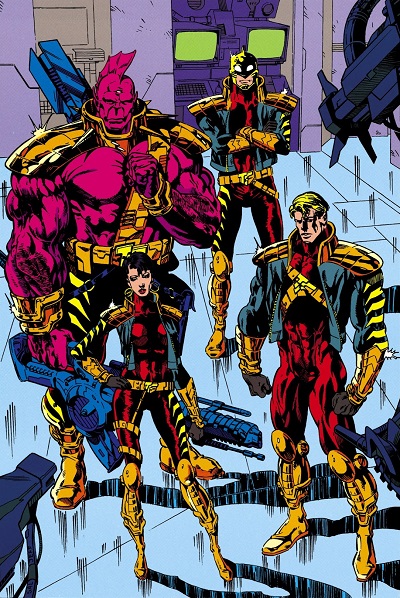 Vandal Savage was, of course, furious to learn that the descendant who had tried to kill him was still alive. Martian Manhunter was also angry, but at Westlake Defense Systems, the arms dealers Miss Watkis had been employing against Savage. The Justice League Task Force wrecked shop in retaliation. "You attacked Task Force Island, Gene [Rabuzzo.] You shot at my children... Do not ever attack me again. This visit has been a courtesy. Next time I shall not be so lenient." Speaking of which, J'Onn also had a firm warning for Triumph. "You deliberately disobeyed orders, modified my plans, and worked to undermine my leadership. In doing so, the Task Force was nearly killed. From precisely this moment forward, you will obey my orders to the letter, Triumph-- or you shall answer to me."

Gypsy was disquieted by witnessing Despero use his hypnotic third eye to order one guard to kill another, before L-Ron caught himself and ordered a downgrade to "stun." Upon returning to her quarters, she kept replaying her latest near death experience as she packed her things. "Despero" tried to give her a gift, but she refused to continue abiding the creature that orphaned her. The Ray was sitting on the stoop outside, trying to figure out when to quit himself, since his personal life was overwhelming him even before adding the distraction of a super-team. Meanwhile, the already aggrieved Triumph had just learned that his investment in a QVC-type operation before he got lost in time was now worth $40 million, and would easily pay for him to set up his own operation.

Within L-Ron's "synthetic consciousness implanted within an organic being," J'Onn J'Onzz reassured the still shirtless simulacrum "You are a man, L-Ron. A being with full capacity to feel the sting of rejection. Your gift for Gypsy was very thoughtful." J'Onn was certain that she would eventually accept it. "This is all part of their growing process. Now that they have all decided to leave-- I shall summon them." Regardless of their prior plans and protestations, the lot were all wearing their sharp new team uniforms when all was said and done. "The training uniforms are meant to inspire unity and cohesion. They should remind each of you that you are no longer individuals-- or loners-- but parts of a whole." Further, Gypsy was given a new energy baton, fabricated by L-Ron based on a weapon Gypsy had devised while acting as a psychic image within his mind. She yet protested, but a holographic projection of Vandal Savage interrupted to vow revenge and detonate a bomb...

"Alive" was by Christopher Priest, Sal Velluto & Jeff Albrecht.
Posted by Diabolu Frank at 12:00 AM