Though not exactly the founding line-up of the JLA, Triumph is at the forefront of a decent team, and well rendered.

The anatomy is dubious, but for its time, not a bad debut cover.

A hero punching a guy's head off would be more remarkable if it registered at all, beyond "badly dressed hero versus gloop aliens." 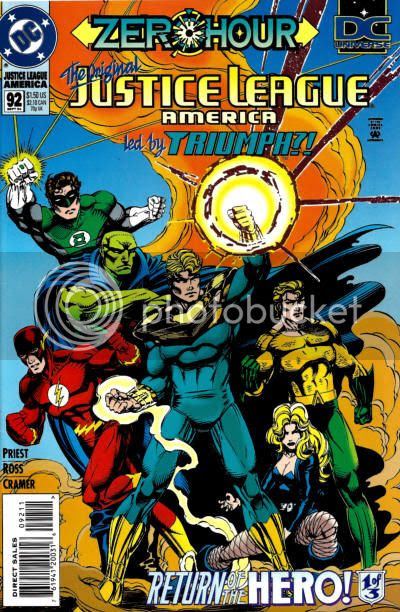 The life Triumph should have lived, according to his own mind. White, blond, male-- was there a single contribution Will could have made to this team's diversity? Well yes, one, but he was never outed in a canonical publication.

Slick, handsome, powerful, and slowly swallowed up by the shadows.

Posted by Diabolu Frank at 3:25 AM

Triumph is a good example of a tragic hero becoming a villain. I think that there is room for such a story in the DCnU. (I suppose going the Macbeth route might work. We can see someone set up as a hero and fall into darkness. Maybe leave out the nagging spouse.)