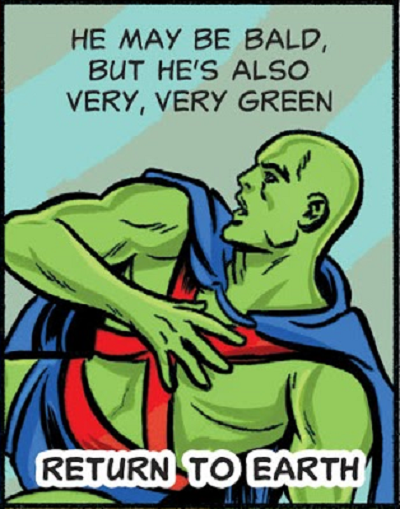 In another one-shot comic book continuation of the Adam West / Burt Ward television sensation, Batman is transported by teenagers from the future to the year 2966 to solve a time-heist engineered by one of his dastardly fiends of 1966, Egghead. At one point, "Bat-Gramps" argues for deductive reasoning over computer logic with an overly-dependent Brainiac 5, which plays out in the form of a board game. Mr. Mxyzptlk cameos as a series of misdirects on the board.
"Concerned Citizen Recalls Seeing Bald-Headed Man," Go Ahead 2.
"Same Citizen Saw A Suspicious Bald Man On Mars," Go Ahead 1.
"He May Be Bald, But He's Also Very, Very, Green," Return To Earth.

To my knowledge, this is the only small appearance of J'onn J'onzz in the TV show continuity, and also a nice nod to the unused JLA Monopoly art of the special's creator, Michael (& Lee & Laura) Allred.

Speaking of slight appearances, September 1st marked the twelfth anniversary of this blog, and I believe that this is the first year that it went unmentioned. If not for the Salvation Run coverage this past summer, you'd be forgiven for fearing the worst. September was always a slow month for the blog in terms of readership, vastly more so since I stopped regularly updating. Frankly, I had other things I needed to get done more this month. That said, the original Z'Onn Z'Orr: Home of the Martian Manhunter and Martian Manhunter: Rock of the JLA Web TV fan pages would also be celebrating their 20th anniversaries around now. I won't pretend to foretell the far future after so many false starts, but an awful lot of artists have waited a long time to see their commissions turn up online. Wouldn't it be nice if I got out a weekly post every Martian Monday going forward?
Posted by Diabolu Frank at 12:00 AM No comments: