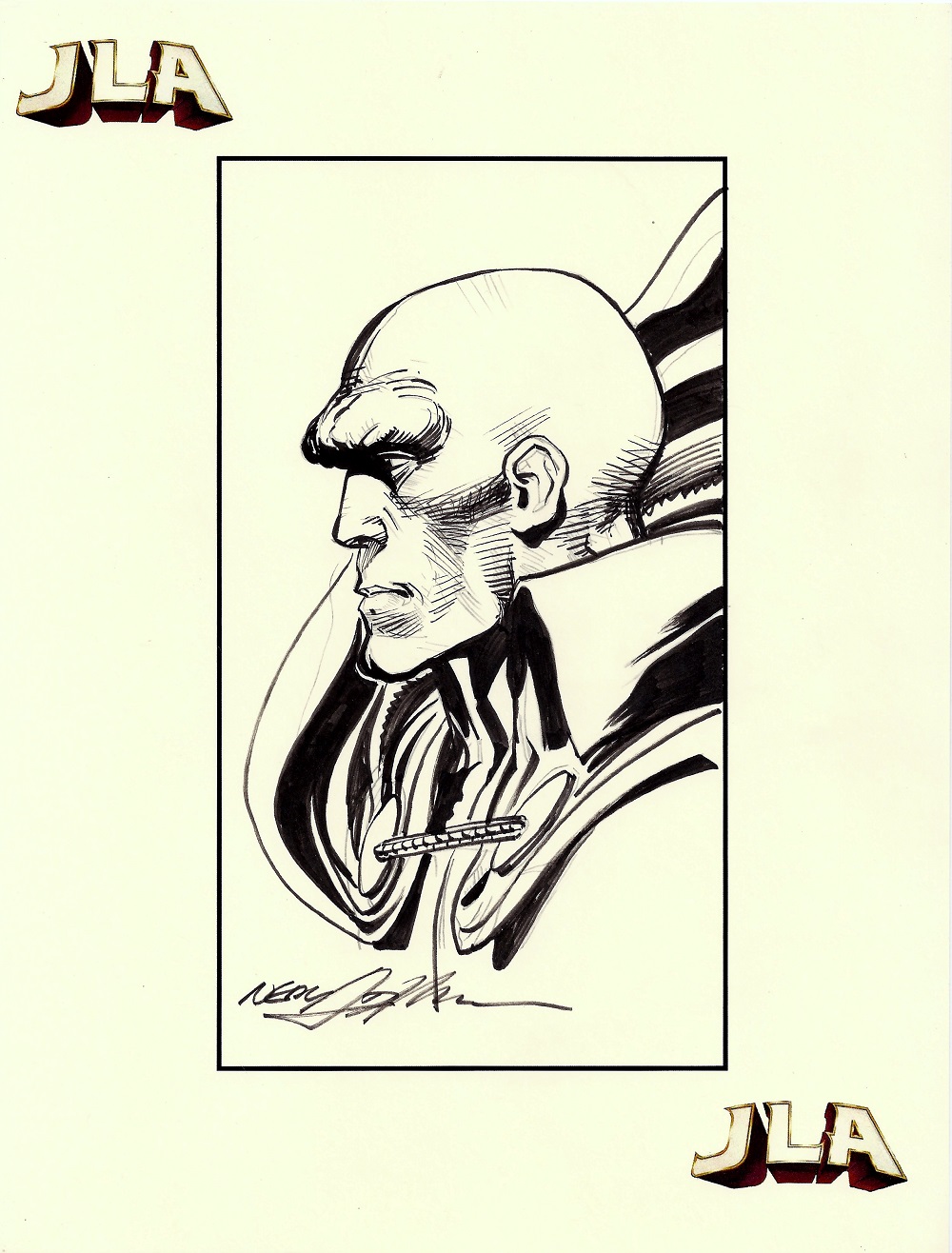 So my thing is that I hate stock head shots. I rarely commission head shots anymore because I always want for a fuller image, and even when I do, it's a custom of an obscure character so that it feels like it's "mine" in some respect. I once knew a fellow who got a head sketch of Jesse Custer from Steve Dillon that said "Cheers," only to learn soon after that it was entirely his default piece, with probably hundreds or even thousands of that same "cheers" drawing out there in the world. Why would I pay for an original photocopy, y'know? That said, Neal Adams is one of the greatest artists in comic book history, and his style informed Michael Nasser's on the '70s solo serial. I didn't get to see Adams on J'onn J'onzz very many times, and while Adams does a little bit of sketching at shows, time and expense are admittedly both major factors in getting one of those. If I was going to own an Adams original, especially one involving the Manhunter from Mars, my best opportunity was going to be one of his many pre-worked sketches available for sale at his sprawling con set-up. This particular piece isn't dated, but it was on yellowed paper with the Morrison-era "JLA" logo that may very well have dated back to that brand's heyday in the late 1990s. Frankly, that was a motivating factor in my finally picking up one of the pieces, since I'm very nostalgic for the Magnificent Seven period that represents "my" Justice League. At the time, I think it was the only J'onn J'onzz in his book, but I've found others when I've visited his table since. I did make a point of comparing them, and while similarly positioned, they vary enough in size and style that you're still getting something of a one-of-a-kind, plus I like mine best. I'll also confess, I was hoping that buying a piece would butter Adams up for a very brief interview for a specific project that I had in mind, and somewhat to my surprise, he actually agreed. That was a funny experience, but perhaps one for another time...
Posted by Diabolu Frank at 5:25 AM 1 comment: 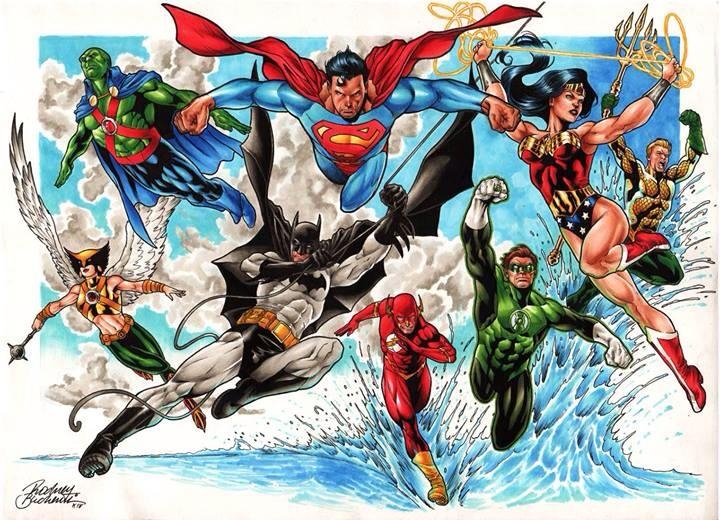 Very rough day at work and a heavily distracted weekend bode ill for my podcasting ambitions, and means we'll at least start the week with a mere image post. I like this piece, but for some reason the artist doesn't seem to want to let go of a scan with any serious resolution. I'd normally link out for an enlargement, but why bother for 720px? Anyway, the timing of the piece (at least with regards to Martian Manhunter) is clearly Brightest Day despite being produced a few years into the New 52.
Posted by Diabolu Frank at 10:54 PM No comments: 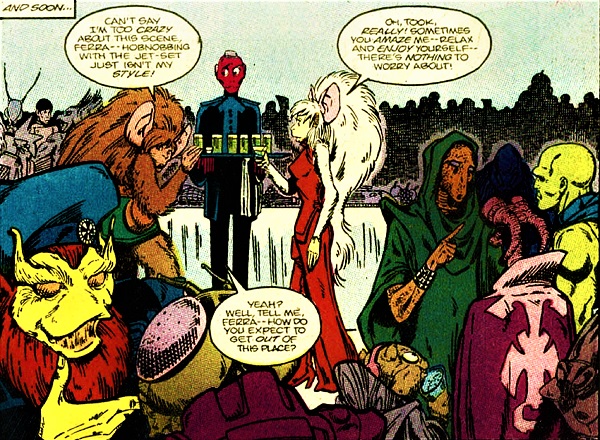 You may recall that J'onn J'onzz only returned to mainstream comics in 1984, so it's curious that less than a year later, he was offered a cameo in a licensed comic copyrighted by the gaming company Atari. It was a DC license, at least, in the brief time period that Warner Communications also owned Atari.

Atari Force started as a series of relatively self-contained episodes in the adventures of near-future space explorers featured in "mini" comics packaged with certain Atari game cartridges. The comics were closer to digests than what we generally consider mini-comics today, running 48 pages on high quality paper with dimensions similar to a thin TV Guide. The ongoing Atari Force standard edition comic book series launched a couple of years later, set a couple decades later. It featured a ragtag second generation team drawn together by circumstance and the original team leader's obsession with the mini-comics' main villain, the Dark Destroyer. It was a fun book by talented creators who bailed after about a year and whose overarching story was carried meekly across the finish line by lesser hands. The book limped along less than a year before getting the ax, and most of that second year was handicapped by truncated lead stories and filler back-ups of varying degrees of amusement value.

For instance, a three-parter was dedicated to a prequel story for Pakrat, a reluctant Atari Force member that was a cross between Rocket Raccoon and... actually, pretty much just a toned down and cowardly Rocket, as depicted by Marvel Studios. Pakrat is arguably cuter, with more mouse and monkey-like features (he's an alien, not Splinter.) Pakrat's whole species likes to steal, which is how he ends up pulling a high stakes burglary of one world's crown jewels with the rodent equivalent of Paris Hilton. This occurs at a sort of royal ball, and Martian Manhunter can be seen in one panel, hobnobbing at the party.

"To Catch a Pakrat" was by Andrew Helfer, Mike Chen, & Joe DelBeato. I'm not familiar with the art team, but I was amazed by their similarity to early Longshot period Arthur Adams as inked by Whilce Portacio. Most of the inker's other credits was over Herb Trimpe on G.I. Joe Order of Battle, which was... nah. So I assume the spark came from Chen, but he didn't have much of a career beyond some Robotech and Elementals material. A shame, based on the effort put into this three-parter.
Posted by Diabolu Frank at 4:42 AM 1 comment: 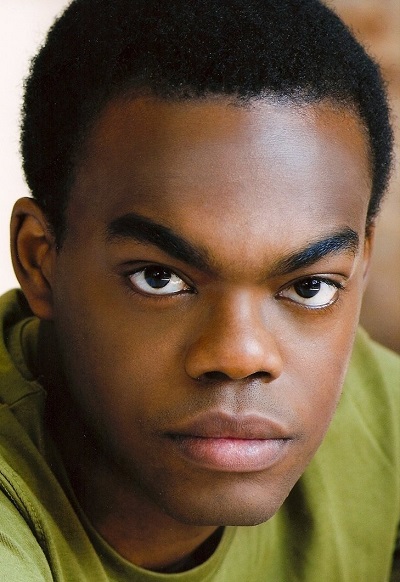 So here's the deal-- Jason Isaacs is still my guy. Like Avery Brooks, his is the voice that I hear when I read Commander Blanx's dialogue. Despite being 57, he's still in pretty good shape, as evidenced by his turn on Star Trek: Discovery a few seasons ago. That said, it's been just under seven years since that initial casting post, and if I want to hold out again until 2030, I should probably recast with an eye toward longevity.

The best thing for me to do, if I'm not going with a literal representation of the comic book imagery for the villain, is to think outside that box. Cast backwards both from the actors that I've already selected and by finding a character for performers I'd like to see in any production of this sort. For instance, I enjoyed watching the full series of The Good Place over the last year or so. Chidi Anagonye was my favorite character on a show that plays heavily with themes of philosophy and existentialism. Chidi is the moral center of the show, thoughtful and concerned to the point of near total inaction. William Jackson Harper was excellent in that role, but he was also a rare point of interest in the mostly interminable Midsommar, playing a duplicitous toxic academic douchebro. It wasn't a complete departure from Chidi, as both characters are academics focused on observation, but it did demonstrate range and Harper's ability to make me turn on him while playing an unsympathetic character.

Parker also has elven, slight otherworldly features, including a severely arched brow-line and intensely puckish smile. In a better world, he could have been a perfect Captain Marvel/Shazam with those Howard Porter eyebrows of his. When he smiles, he radiates joy, goodness and warmth. Unfortunately, we're on Earth-Zachary Levi, one of the really crappy Earths, and so I'm instead casting for subversion. What if you took the expectations that come from this guy's presence and prior roles, and employ those qualities for the charismatic demagogue Commander Blanx? Though both men are in great shape, Jonathan Majors has nearly half a foot on Harper, but Blanx was never played as a major physical threat. His whole thing was that he was a charming fascist who bullies and connives his way into a position to commit global genocide for his sole personal gain. I think Harper could act the hell out of that, and I'd love to see his malevolent glee played against J'Onn's quiet virtue.
Posted by Diabolu Frank at 5:25 AM 1 comment: 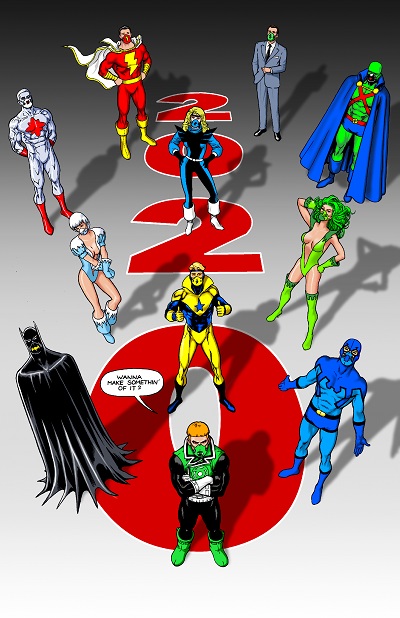 Super-heroes wear masks. But I wouldn't be me if I didn't point out that this is a coronavirus safety message that explicitly notes the year is 2020 despite the JLI being on-model for 1987. I do like that all of the masks are branded, especally Bat-Mask 'natch, but it's a bummer than Martian Manhunter's is the most "there." I guess it's a view of Mars from space, and it's better than that man-symbol they floated in the Morrison JLA, but it's easily the worst of the lot (and Max Lord just has a green mask with a dollar sign.) I wish my mask had an atom symbol on it, though I'll admit the best one is Blue Beetle's.
Posted by Diabolu Frank at 1:22 PM 1 comment: