Probably my favorite of the fan pieces from the SDCC convention booklet/program's lengthy observation of the Martian Manhunter's fiftieth anniversary was this faux ad for J'onn J'onzz Play-Doh. A minor Leaguer to the Baby Boomers and left behind throughout the Bronze Age, the Alien Atlas missed out on a ton of Generation X junk culture milestones, but this nifty piece salves that wound considerable for fans like myself.
Posted by Diabolu Frank at 12:00 AM No comments: 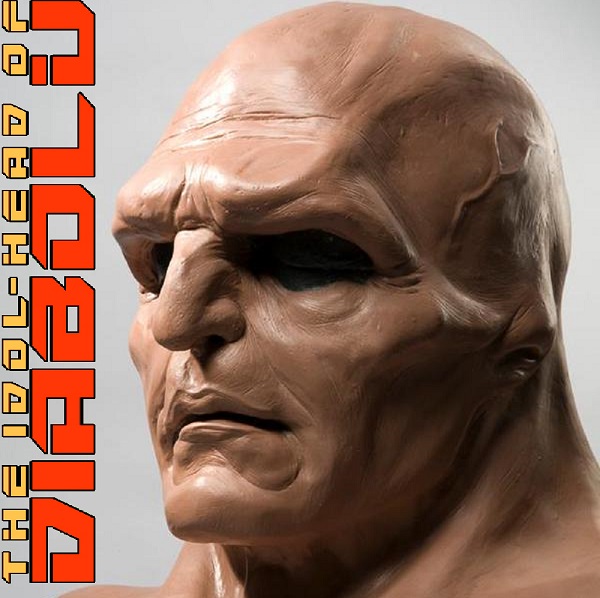 A brief discussion of the unproduced JLA movie from the late aughts and a planned documentary chronicling its ill-fated course.

We enjoy dialogue on the red planet, so here are our non-telepathic contact options:
Posted by Diabolu Frank at 12:58 AM 1 comment:

Duncan "Skullboy" Crawford is a sculptor who has worked in the art department of major geek cred motion pictures like The Avengers, Green Lantern, Pirates of the Caribbean: On Stranger Tides and Thor. You can use his blog as a gateway to sites devoted to his design studio, art, Marquettes, and photos of film work. Here, he's offering dual congratulations to J'Onn J'Onzz's half century celebration and indie darling Johnny the Homicidal Maniac's tenth (now twentieth as of this month. I bought the first issue new, for I am now old.) There were a number of such anniversaries highlighted in the SDCC convention book, but I'd say these two and Krypto were the most legit. Lil' Archie was just the proto-Muppet Babies of Riverdale, but got four pages of art and articles. The New Teen Titans turned 25, meaning they were neither new nor teen, and were only a revamped line-up of a property that debuted in 1964. Adding to the dissonance of devoting 16 pages of art to a questionable landmark was the tendency to showcase designs from the Teen Titans cartoon, then only a couple of years old. A decade of David Lapham's Stray Bullets earned two pages. JTHM got a two page article and thirteen pages of fan art, with the last quarter page (108) featuring the Manhunter guest appearance above. While The Spirit turned 65, his 19 page section was centered on the passing of his creator, Will Eisner. John Jones would have made for a good team-up partner in theory, but probably not in the diminished spirit of the proceedings.
Posted by Diabolu Frank at 12:00 AM 2 comments: