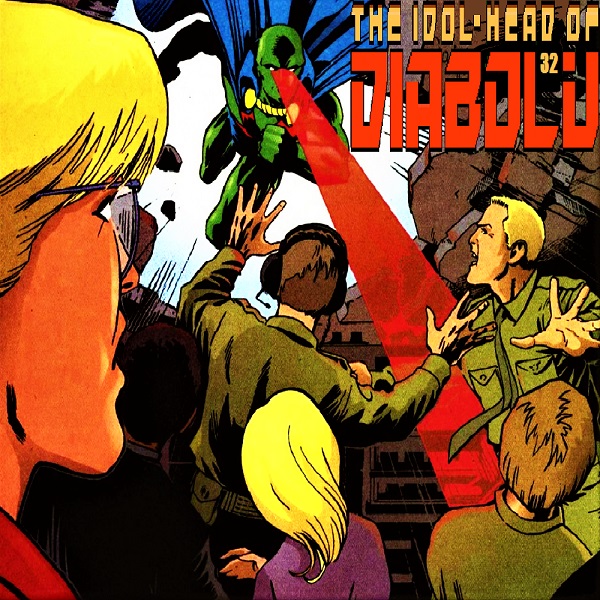 JLMay 2018-- Silver Age (2000) Podcast Crossover Event
Agamemno reaches Earth as the incredible event begins! Gathering some of the JLA's greatest foes --- Lex Luthor, Sinestro, the Penguin, Catwoman, Mr. Element, Dr. Light, Chronos, Black Manta, and Felix Faust --- to help him in his plan to conquer the Earth, Agamemno switches the minds of the villains with those of their nemeses! Can the heroes foil the plot before the would-be conqueror prevails? You asked for it-- and you got it! A STAGGERING SUPER STRUGGLE stretching across this month's DC COMICS! Dig what's Coming!

From here follow JLMay 2017 to these fantastic podcasts! Each will cover a different issue of SILVER AGE and each will come out in May! And don’t forget to use the hashtag #JLMay2018 when discussing on social media!

We enjoy dialogue on the red planet, so here are our non-telepathic contact options:

Posted by Diabolu Frank at 10:21 PM No comments: 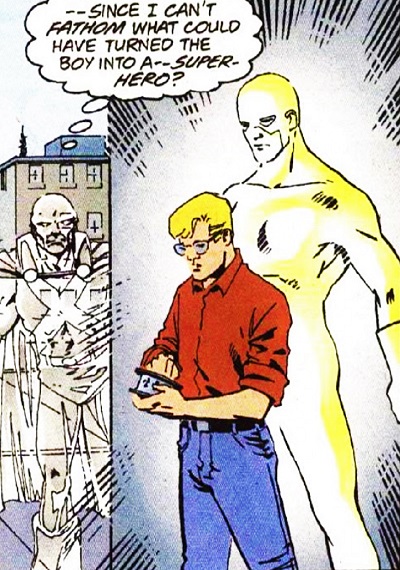 "Imagine-- if you can-- that with the simple spin of an alien dial, you could transform yourself into a super-hero! Robby Reed possesses such a device and uses it to battle evil-- even though he never knows which hero he'll become or what powers he'll possess whenever he decides to--"

Littleville, Colorado is established as the home of Robby & Gramps Reed, along with their housekeeper, Miss Millie. The small city had been plagued by the super-human hoodlums the Thunderbolt Gang, but Robby and his magical H-Dial hoped to stop them once and for all in his latest heroic form, the darkness generating Twilight (who strongly resembled the Marvel heroes Cloak and The Shroud, but with the powers of DC's Shadow Lass.)

In a Post-Crisis revision of his origin story, it was revealed that Robby determined that his H-Dial had inscribed upon it Interlac characters from the 30th Century language used by the Legion of Super-Heroes. After weeks of study based on information from a future weapon once confiscated by Superman that made the news, Robby was able to figure out the rotary-style dial had ten letters on it that translated as A-D-E-H-I-L-N-O-R-V, but he only needed to concern himself with four of them to become a hero. 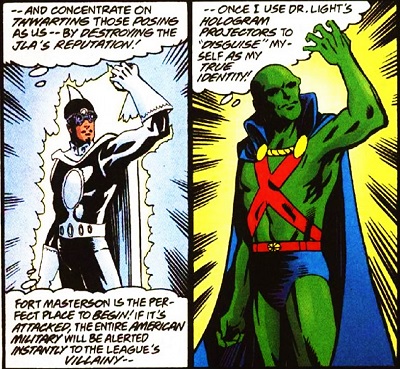 After busting some T-Bolts, Robby bolted to the school bus for a field trip. His friend Joey had a flier that he tried to hide from the orphan about a father-son "Olympic" event at Littleville High School. Robby didn't remember his father at all, and Joey was surprised that he seemingly wasn't even curious about the man. The class arrived at Fort Masterson, the military base that housed the latest technology, a "Computer Ordinance Macro-Accelerator." Unbeknownst to them, the form of the super-villain Dr. Light was also lurking outside its gates. In truth, this was J'onn J'onzz, trapped in the body of the Justice League of America's foe. J'onn was unaware of the extent of evil Dr. Light was getting up to in his Martian form, but was reluctantly following Batman's plan to smear "himself" and create resistance to the compromised League.

Using Arthur Light's various technological projectors, J'onn created a hologram to appear as the Martian Manhunter and attack the base. "Moons of Mars! I didn't expect children here! Now I must plan my 'rampage' with extra care!" Even more surprising was a figure among the school kids, "What? Can it be--? I know that boy! That's Robby Reed! I recognize him-- though it's been years! I haven't seen him since... since the funeral." More than a decade earlier, Jack Reed had served on the Middleton Police Department before he and his wife were murdered by gangsters. Robby's grandfather soon after moved to Littleville, where Robby eventually found the H-Dial he now used to become the Pyronic Man to defend the base. 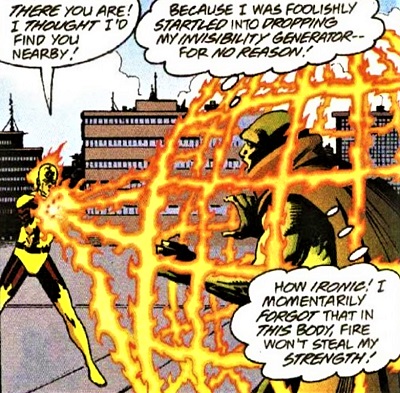 Despite no longer physically being a Martian, J'onn J'onzz reacted poorly to a flaming cage. Recovering, the Manhunter created holograms of Superman, the Flash and Green Lantern to distract Pyronic Man and the military forces. Robby decided to dial up another hero, something he could not do so immediately in his earlier appearances in 1960s House of Mystery comics. Then he was oddly surprised to become a giant, even though his very first H-Dial transformation was into Giantboy. Unable to function safely in his unnamed giant form (another break from the old strips,) Robby quickly cycled through a quadruplet identity (also unnamed) before settling on an old form, Radar-Sonar Man. Finally, this form managed to destroy "Dr. Light's" equipment, forcing J'onn/Arthur to discreetly strip off his villain costume to escape in plain clothes. In the aftermath of the assault on the base, no one seemed to notice him simply walk away. The Manhunter had accomplished his goal, as the military sent out an alert that the Justice League had gone rogue.

J'onn remained proud of the son of Jack Reed, but wondered what motivated him to super-heroism. In an epilogue, we learn that Gramps Reed refused to ever speak of the man whose crusading had cost the life of his (unnamed, fridged) daughter, encouraging his grandson to focus on the present and his scientific pursuits. Miss Millie felt that Robby's constant disappearances of late were related to a quest to understand his father, and Scrabble tiles resting on a table in Robby's lab shack were shown to spell out "D-A-D."

"The One-Man Justice League" was by Mark Waid & Barry Kitson
Posted by Diabolu Frank at 8:30 PM No comments: