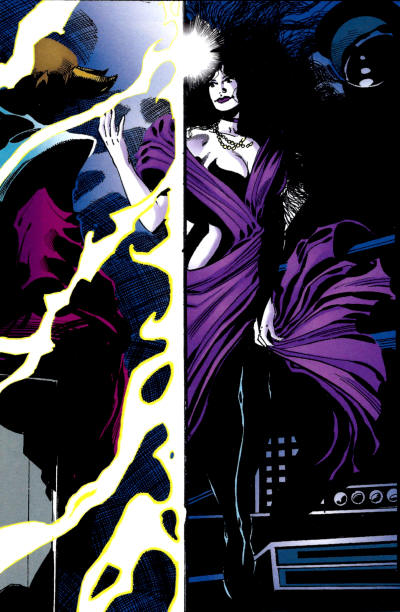 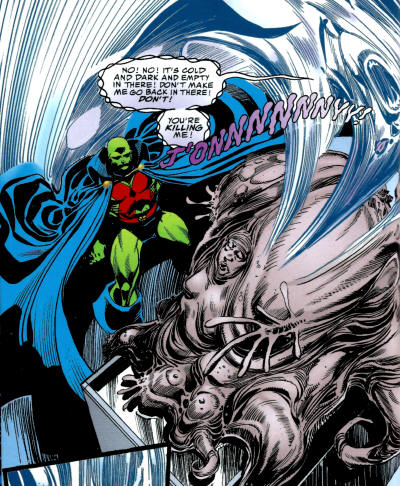 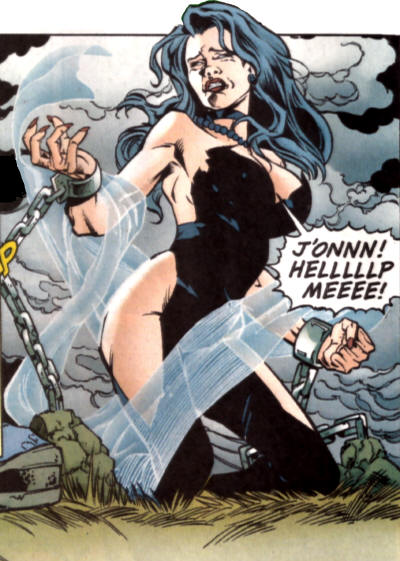 Created by John Ostrander and Tom Mandrake
Posted by Diabolu Frank at 12:00 AM 3 comments:

J'onn J'onzz's unnamed parents appeared in one of the hero's earliest stories as carbon copies of the basic Martian with a color flipped costume and/or a barely noticeable gender swap. They appeared once or twice more during the Silver Age Detective Comics run, and then nothing for 3½-4 decades. If I recall correctly, they didn't turn up again until the last story arc of the 1998 Martian Manhunter series, where John Ostrander finally named the father "M'yrnn" and Eduardo Barreto redesigned the character... as still pretty much J'Onn J'Onzz in essentially the same costume, but with less red and a Jemm-y gem on his brow. I wasn't at all a fan of Ostrander's exploration of J'Onn J'Onzz's childhood through the dark lens of his then-newly invented evil twin brother, but I did like that he bucked a common comic book crutch by having his mother Sha'sheen being the dominant and defining parent while the father was a comparatively minor entity.

With this in mind, I looked at the brand name talents available to work on this jam piece and thought "who would I like to draw the Martian Manhunter besides Carlo Barberi?" Costume variations aside, M'yrnn was a second opportunity to get a proxy J'Onn into the piece, and you know which long time DC artist specializing in their iconic characters who rarely/never got around to the Alien Atlas was in Houston this year?

Scott Kolins is of course most famous for his three year run on The Flash with Geoff Johns, but he's been on my radar since he got his start on the Ultraverse line and my favorite of his runs was a brief stint on The Avengers (I especially dug his Captain America!) Saturday in Space City was tense due to the demands of getting so many parts of the jam completed before several of the intended artists left early, so I was in a bit of a rush when I raced to Kolins to ask him to join in. He was approachable and friendly, not to mention quoting a very amenable price for a full figure that would occupy one of the largest spaces available in the jam.

Look, this project is a collaborative effort, and virtually everybody involved brought their A-game, so it's not fair to call out favorites. It's just that M'yrnn J'onzz looks so much better than he has a right to, by far the best he's ever looked anywhere, that it's hard to love all these commission "children" 100% equally. I'm all about this guy's expression, the brawny curve of his arms, those wicked cut legs, and especially his adorable, lovingly rendered little footsies and toes! Plus, Kolins added those sick graytones that give so much depth and pop... and speaking of pop, it's hard not to assume J'Onn was conceived in an earthly, earthy fashion with the Alex Rossian attention to certain prominent details. Jeebus! Finally, M'yrnn J'onzz is not only appropriately in scale compared to his son and the other characters, but also delightfully larger than life!*

*Not talking about the package anymore. C'mon, guys!

More from Scott Kolins
The J'Onzzes
Posted by Diabolu Frank at 11:03 PM No comments: 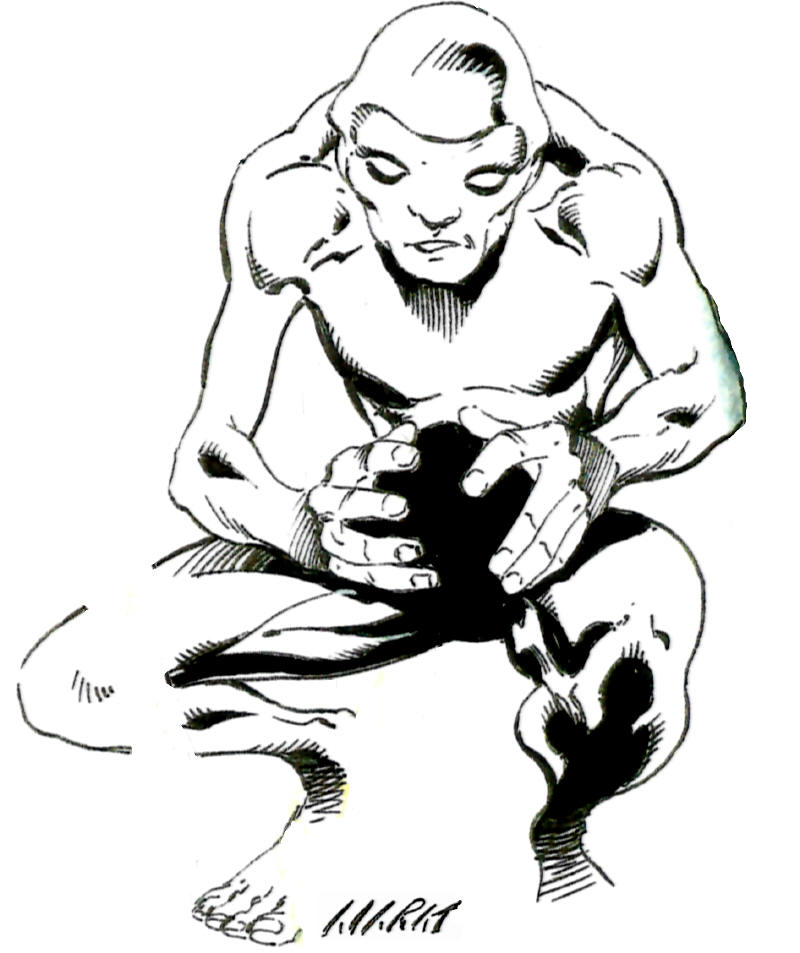 
More from Marat Mychaels
The J'Onzzes
Posted by Diabolu Frank at 11:21 PM No comments: