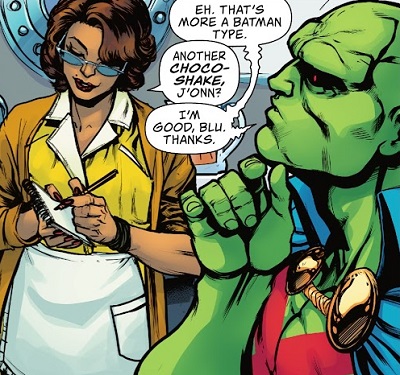 "Three days ago, I decided to live a more grounded life, connect with my adoptive home and the people I protect. Two days ago, I fought a gig economy knock off of an old adversary. Now I sit across from a thirteen-year-old girl who says she's my biggest fan..." Zoey... "Zook" had watched the break-in, and relayed the details over milkshakes at a Metropolis diner. The waitress, Blu, seemed to be familiar with J'Onn J'Onzz and his Choco-Shakes.

The plainclothes detectives, Lt. Jack Certa and Ostrander, follow Zoey's lead on kids recruited to crime while wearing gold variant Court of Owls facemasks. They stake out the home of a kid named Justin Miller who seemed a prime candidate for the operation. I actually thought the partner was Peters from the first chapter, and it makes clear that a byproduct of diverse representation is that I wouldn't be confusing three different brown-haired white guys that basically all look like me and who all work together. I have to wonder if they're setting up a fake-out with that. Anyway, MISTERTWENTYTWO slid into the kid's DMs, and involved him in Katharsis Aureus, which Ostrander had researched. "It's like Greek or Latin for 'Golden Purify.' And it's kind of the scientific name of vultu'"

The conversation abruptly stops as the cops tail the kid after he exits his home with a packed dufflebag. Following directions on his cell phone, Justin ends up in a white van with dark tinted windows full of men in owl masks. A high speed pursuit follows, the van driver looking like a J. Scott Campbell rogue with an imperial circle beard, his vibrant red hair in a high fade slickback over his flaming neck tattoo. This would be our New 52 Getaway King. I can dig it. "Told ya, bro, no one catches the king." Well, a Martian Manhunter can. "I let the driver escape... for now. He is of no consequence. The kid is the priority." Cue a very special riff on that moment from All-Star Superman. Or maybe "You Are Not Alone." Well, probably not a Michael Jackson number, right?

The Sleuth from Outer Space has no patience for the threatening henchmen for info track when he can just reach into their minds... only to "hear" a voice. "Hello, J'Onn, it's been a long time... Let's call it a telepathic wiretap. Nanotech implants, really. All our operatives have them. You should feel proud, J'Onn. They were designed specifically for you." The voice chides him for not being the detective of old, unable to figure out the riddle before him. Another hint? "What's a kettle? ...It's a circle of... vultures. And vultures, J'Onn... only circle the dead." 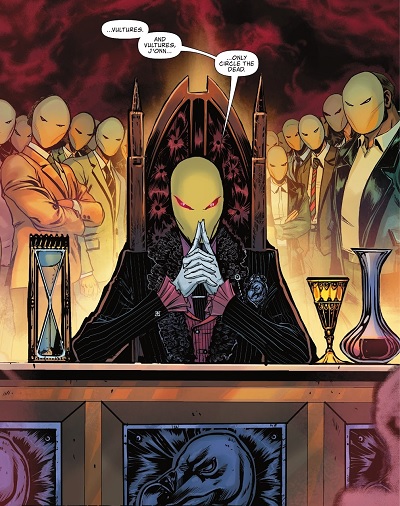 "A Face in the Crowd: Part Three" was by Shawn Aldridge and Adriana Melo. Sorry for basically taking the month off, but I was pursing other obsessions. I've been watching Mutant X for podcasting purposes recently, and an episode referenced the "Infantino Hotel" on "Carmine Street" or some such, and it made me think of this strip. I will be seriously surprised if Vulture and the Court of Owls aren't explicitly connected, maybe leading to a continuation in Gotham City? I was going to point out that town will soon be down a Batman, but for all I know, this nostalgia parade is a long goodbye to our own imperiled Alien Atlas in the run-up to "Death of the Justice League".

I confess a shudder at that last page reveal. Excellent line. I guess once Marco Xavier shed the Faceless fat suit, he swore off ever donning it again. In fact, the modern Mr. V is positively anorexic, better reflecting his favorite bird and running counter to the common Kingpin trope of a literal "big man." I did the last write-up in one minimalist steam of transliteration burst. This one was an off-and-on hours long summation. A lot to digest here...
Posted by Diabolu Frank at 12:00 AM 2 comments:

To permanently save this episode’s MP3 file to your computer or other listening devices, right-click the link below to bring up sub-menu and select “Save Target/Link As…” Pick where you want it to save to, and you’re set.

The original interview from which clips were deployed in past episodes of The Idol-Head of Diabolu Podcast, now in one handy presentation (although I did save about three minutes of material for one planned episode to come.) Interview conducted at Houston’s Comicpalooza, on either May 26 or 27, 2018. The interview has been edited for time, content, consistency and quality. We spend a lot of time on his early career as a writer and editor, including Amazing Heroes, Comics Week, Secret Origins, The Legend of Aquaman Special, Who’s Who in the DC Universe, DC Cosmic Cards, Doom Patrol, Daily Planet Special Invasion! Edition, Atlas of the DC Universe, !mpact Comics, Legion of Super-Heroes, Underworld Unleashed, the death of Tora “Ice” Olafsdotter, and surely more Martian Manhunter questions than he ever had to field in one sitting. Finally, a brief tribute to the late Brian Augustyn via a critical review.

If you enjoyed this podcast, check out others in the Rolled Spine Network…