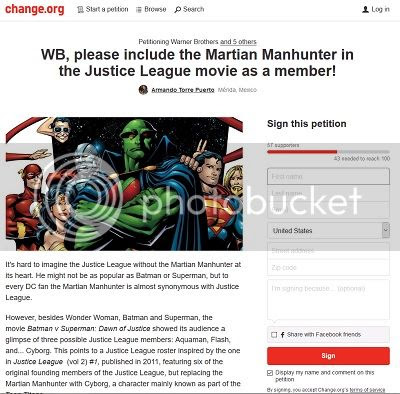 Our buddy Rafa Rivas of Ralph Dibny, the World-Famous Elongated Man has started a petition asking Warner Brothers to include Martian Manhunter in their upcoming Justice League movies, and asked me to help promote the effort. I'd actually see Ralph & Sue as a better fit for Zack Snyder's creative vision, which aligns more with Identity Crisis than anything in a Showcase Presents... I haven't seen Batman v Superman: Dawn of Justice yet nor will I anytime in the near future. I'm perfectly happy watching J'Onn J'Onzz on CBS's Supergirl instead, but please sign on if you want the Alien Atlas to get the big screen treatment the rest of his JLA friends will soon experience...

SIGN THE PETITION
Posted by Diabolu Frank at 5:11 PM 3 comments: 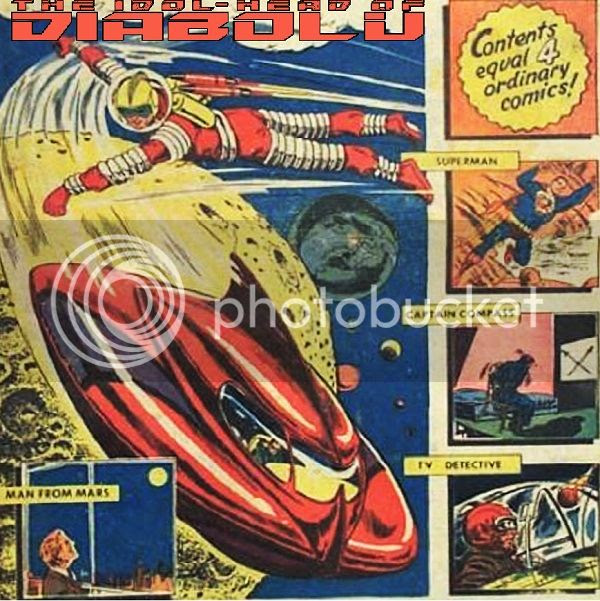 After nearly a year, you'd be forgiven for thinking we were covering our retrospective of John Jones' publication history in real time. Blame our coverage of the current but increasingly finite ongoing Martian Manhunter maxi-series? 1957 offers a lot of repeats with slight variations on John Jones stories, but also the debuts of pretty probationary policewoman Diane Meade and TOR, Robot Criminal from Mars! Also, we look at the Sleuth from Outer Space's international publication history, which started quite early in Mexico and Australia, the latter proving the Martian Detective his first ever cover appearance (a phenomena well known to Aquaman, who turned up on lots of foreign editions in original illustrations before fronting a book in his native country.) Also, ads for our friend podcasts, Pulp 2 Pixel's Secret Sagas of the Multiverse and Count Drunkula's The Power of Fishnets. Please stick around to rank the Detective Comics stories from 1955-1957...

We enjoy dialogue on the red planet, so here are our non-telepathic contact options:
Posted by Diabolu Frank at 3:56 PM 3 comments: 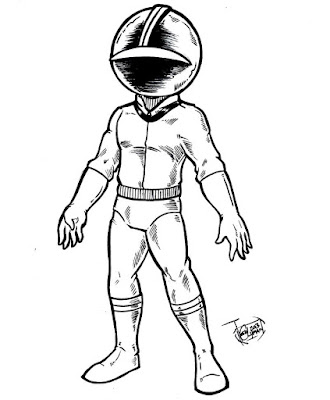 As I held back art commissions for the Martian Manhunter's sixtieth anniversary celebration and became increasingly less productive working on this blog, pieces like this one by Josh C Lyman have collected dust for 2½ years when they should have gotten the exposure while blogging was still a thing that was helpful to anybody. He'd previously produced a Chibi-ish Thythen for me as well, at a very agreeable price (that again, probably isn't applicable a quarter decade on, but nice of him at the time.) This is a cool piece in the artist's more realistic style, and has quietly served as Vulkor's sidbar icon for some time. I've included my totally basic coloring job below. You can read up on The Capsule Master if you're so inclined, and here are some more resources related to the artist... 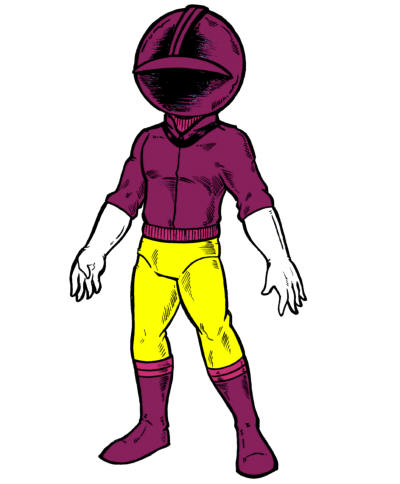 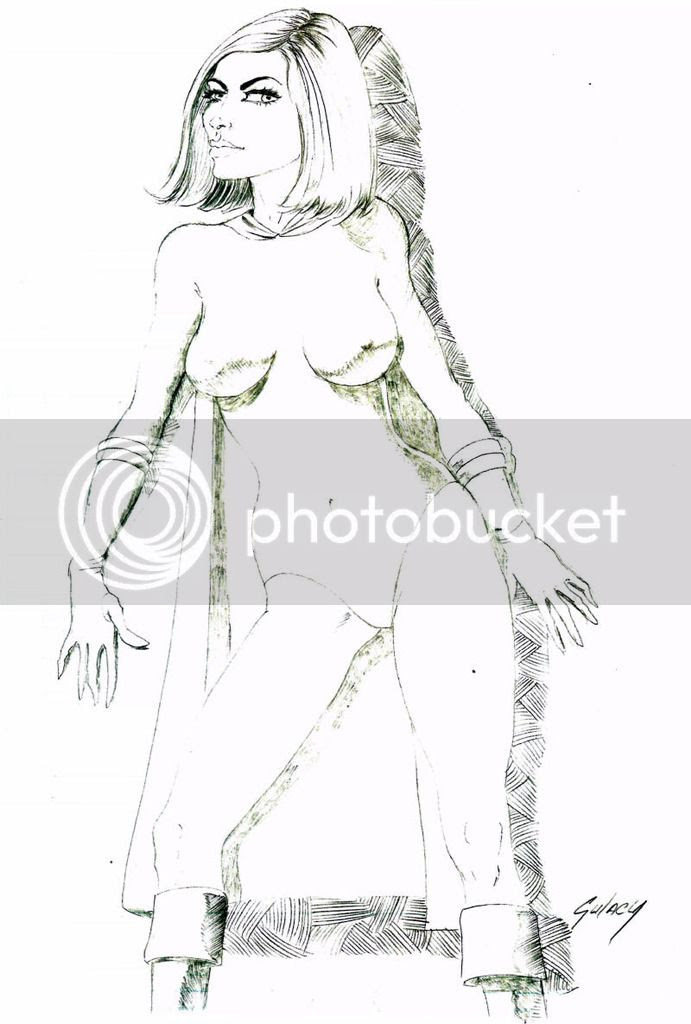 ...Or technically, 2015 Bel Juz Space City Comic Con Commission inked by Walden Wong after the pencils were laid down the previous year at a different convention. For the record, Paul Gulacy is one of my top five all time favorite comic book artists, and one of the rare few that can still get me to buy a book I otherwise wouldn't solely because I want to see them draw it. I do really, really miss the zip tones though, which Gulacy was more a master of than that Shang-Chi kid with the kung-fu. If I recall correctly, I attended my first comic convention in 1994, and one of the dealers was telling me he was trying to get Gulacy to come down the following year to promote a T.H.U.N.D.E.R. Agents revival that never happened (aside from dumping the already produced material into the last issue of Omni Comix.) Twenty years is a long wait to meet an idol, so it was nice to final close that particular life loop.

Gulacy ended up doing two pieces for me, a smaller one as part of a jam with another of my all-timers (two at one show!) and this one with my favorite Alien Atlas femme fatale, Bel Juz. Unfortunately, this one was only pencils, and I could not get the thing to reproduce when I tried to scan it (as you can see above.) I considered getting it inked, but I'd already spent a lot more money than I should have on my hobby in 2014, so it had to wait until the following year. 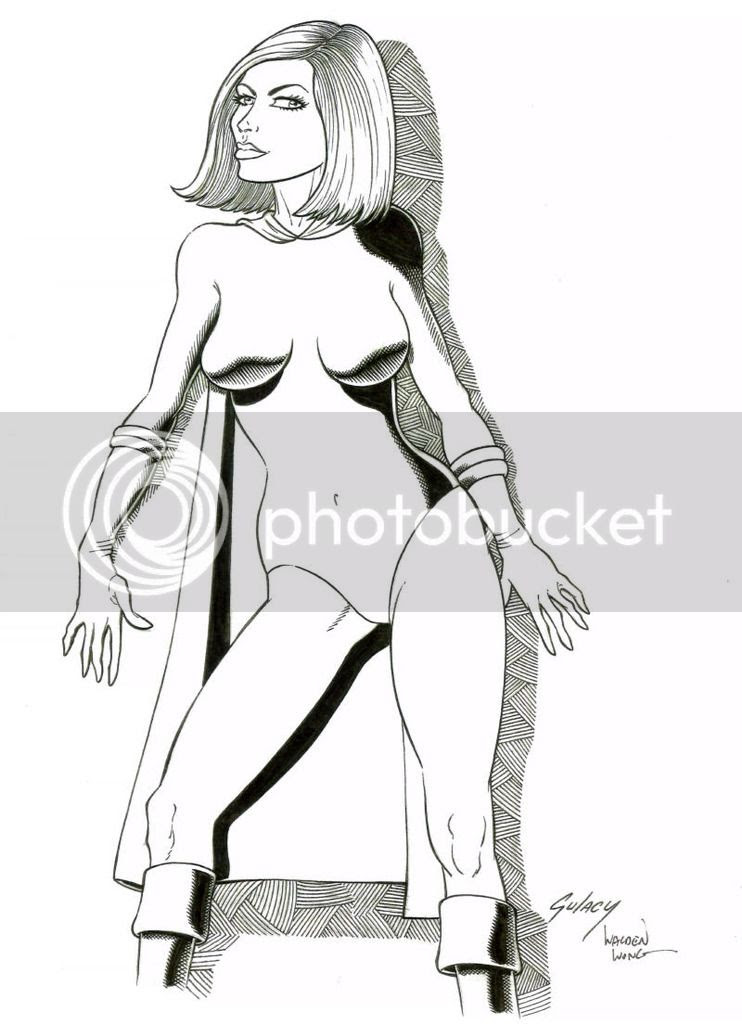 Several choice inkers came to Houston in 2015, but when I've talked to embellishers in the past, they either were doing exclusively their own original art, lacked the time for a full piece, or were cost prohibitive. X-Men, Deadpool & JLA inker Walden Wong was the first instance where everything lined up just right to get a redux done, and I think he did an excellent job of retaining the Gulacy while instilling his own personality into the piece, plus it must have been a real pain to do all those crossed spirals in the shadows! Wong often inks Carlo Barbieri, who had done Martian Manhunter for the J'Onzz Family jam, and offered to erase the Gulacy nipples I specifically asked not to be inked, but I waved him off to keep them for posterity. Um, anterity? Look, I didn't order the nipples, but if Paul Gulacy wanted nipples in his pencils, I'll keep them so long as I don't have to wave them around on the internet.

Paul Gulacy Walden Wong
Posted by Diabolu Frank at 12:00 AM No comments: 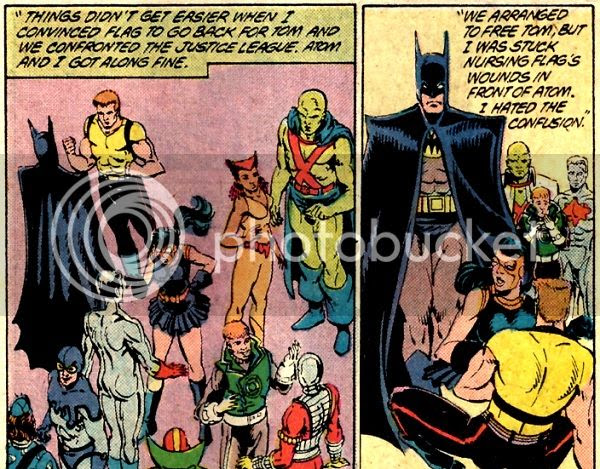 For many years I've had a copy of Nightshade's origin set aside, waiting for me to catch up with covering the point in Justice League International where the team fought the Suicide Squad for this blog. This project did not outlive my intentions however, and if I ever cover that period, it'll probably be in podcast form. But how could I let the opportunity to post a scan of Rob Liefeld drawing the Martian Manhunter go by, even if it is more of a proto-Liefeld and I got a more classic take through a Malefic commission last year? Oh, and if you're interested in hearing this specific story discussed audibly, why not check out its spotlight episode of The Secret Origins Podcast
Posted by Diabolu Frank at 5:07 PM No comments: