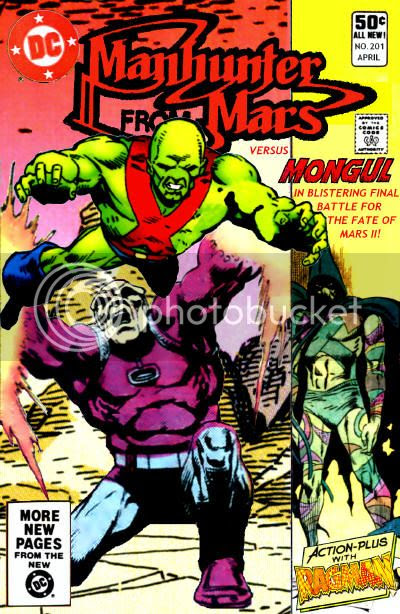 An enormous starship the size of a small city hovered over the Spacefort. A twenty foot wide flat saucer floated out of a bay in the ship down to the surface. Lying on top of the disc was Mongul, flat on his back and unconscious. A servitor robot accompanied the body. When Martian guardsmen approached, swords drawn, the servitor explained that his master was in need of medical attention. If this care was not received within ten minutes, captive hero J'onn J'onzz would be crushed to death inside a cube-trap. After another five minutes, the starship would automatically launch a limited assault against the Spacefort. Should Mongul die, the entire planet of Mars II would be forfeit. A guard guided the disc to the nearest medical center, while the available members of the All-Martian Council swiftly decided to accept Mongul's terms.

The healers found that Mongul was suffering from a massive cerebral hemorrhage, requiring immediate surgery. Martian science determined the exact point of blood vessel rupture, and with their most powerful instruments working over the course of an hour, managed to cut out a 6cm square hole in Mongul's skull. Blood drained out as the healers repaired the damaged vessels, followed by replacing and sealing the skull extraction. Mongul's condition stabilized, and he was moved to a care room for rest and observation.

The servator remained outside the room to stand watch, but was unaware that Mongul's roommate had awoken in the middle of the night. On his last visit to Mars II, Mongul had savagely beaten J'en as part of a trap laid for J'onn J'onzz. J'en's face was swollen and her arm was in a cast as she stared at the comatose Mongul and contemplated revenge. She thought of her lover J'onn, and his certain disapproval of murder. She wasn't even sure that she could kill him if she wanted to, and feared the consequences of an unsuccessful attempt. Eventually, J'en limped back to her own bed.

The next morning, Mongul regained consciousness, and spoke with representatives of the All-Martian Council. "So you're the shriveled olive 'chiefs' of these sword-wielding savages? I'm surprised your surgeons didn't treat me with sharpened sticks and coconut shells. Had there been any other nearby options in this armpit of the galaxy, I would have destroyed the whole planet just to clear my course. No, I don't believe I'll bother with the likes of you. A backwards tribe like yours puts their craven idols above insignificant bureaucrats. Bring me your god, or whatever passes for one in these parts."

The closest thing to Vrom available was the messianic Z'vi Z'har, who despite protestations, agreed to meet with Mongul. Z'vi had hoped for gratitude after the Martians had saved Mongul's life. He was instead given the choice to either renounce Vrom and accept Mongul as his living and merciless god, or have his severed head announce it for him. Looking at the glowing red eyes of Mongul, who was fully prepared to vaporize him for dissent, the mentally unbalanced Z'vi Z'har legitimately recognized him as the divine. Z'vi joyfully began to proselytize in the streets that the golden age of Mars II had finally arrived. From his sick bed, Mongul smirked at the horrified J'en. 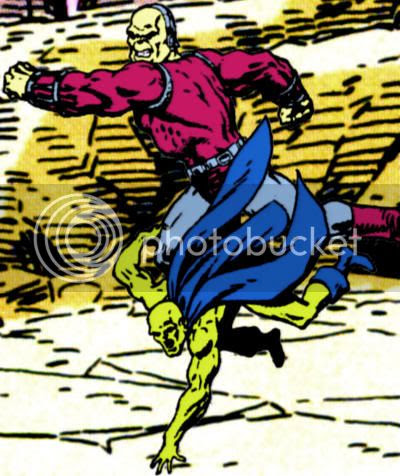 Over the next several days, Mongul made a remarkable recovery. He was soon on his feet and exercising to regain use of an affected arm. His senses temporarily diminished, Mongul amused himself by "correcting" the gospel of Vrom and enlightening Z'vi Z'har to his own "testament." Mongul demanded that the Robo-Chargers that had been cannibalized for the Spacefort be reconstructed. There was a great schism amongst the Martian people between those who continued to believe in Z'vi Z'har following his conversion and those who condemned him as a false prophet for a diabolical being. No one dared question Mongul directly, as his temperament was labile and his fury lethal. One day, Mongul announced that his spaceship was the ark that would lead the Martian people in exile to their ultimate destination. Mongul felt that enhancements needed to be made to make the Robo-Charges more effective as he plotted his next conquest, and seeing as he had every Martian life at his disposal, a power source shouldn't be a problem. In his eyes, it was a reasonable sacrifice for "his" people to make.

Before the ark could land to carry away the Martians, it simply kept flying over and beyond the spacefort. The ship would not respond to Mongul's remote orders, so he teleported after it. Mongul found himself sitting on top of his zeta-beamer as it plunged off his ship into the Mars II desert. Landing roughly, Mongul struggled to pick himself up from the ground, still plagued by partial weakness. The Robo-Chargers followed him into the desert, and opened fire. Though battered by their blasts, Mongul wielded his own devastating energies against them. Just as Mongul disabled the last of his mechanized foes, an armed Martian Manhunter set on him with guns blazing.

Mongul didn't know how J'onn J'onzz had escaped his trap, but he did know that the surface of Mars II robbed its inhabitants of most of their powers. Mongul easily disarmed J'Onzz, and slapped him about once the fight turned toward hand-to-hand. Martian citizens raced to the scene, to see if their champion could prevail over the abomination their former messiah had given them over to.

Suddenly, in an explosion of light, J'onn J'onzz and Mongul were outside the crypt that once contained the Crystal Key. J'onzz explained that he wanted his people to see a Martian stand up to Mongul, to debunk him as a deity. However, he recognized that he needed to shift locations with zeta-beams in order to utilize his own powers. Suddenly, between Mongul's compromised condition and the Alien Atlas' renewed strength, the match was no longer remotely in Mongul's favor. However, Mongul was still the stronger of the two, and held J'onzz by the throat while blasting him in the face with eyebeams. J'onzz had one more trick up his sleeve, as extraordinary pain erupted inside Mongul's skull. Through meditation while held in the cube-trap, J'onzz had somehow recovered the telepathic and telekinetic abilities lost to Martians for decades. This was J'Onzz's method of escape, and he was now using them to provoke another stroke in Mongul's brain. Growling in pain and anger, Mongul raced to the zeta-beamer and disappeared under its power.

The Manhunter from Mars recalled Mongul's former ship, and returned to Mars II. Landing, he emerged to great applause, and declared that the ship would be torn apart and used to expand the spacefort. However, an epilogue ended the story on a down note. Z'vi Z'har had disappeared with a small band of zealous followers. The All-Martian Council, wishing to insure nothing like this ever happened again, planned to turn Mongul's ship into the basis for a small fleet of powerful "defensive" craft. Further, their experiment in creating a perfect warrior to truly guide the Martian people to glory was secretly progressing. Finally, J'onn and J'en were reunited, only for J'en to express her disgust at her personal weakness and her disdain for J'onzz's suffocating personal code. J'en had decided to leave her lover, in hopes of finding a version of herself that she could live with.

Under the guidance of editor Len Wein, co-writers Roy Thomas and Gerry Conway with guest artist Jim Starlin ended this epic in fine form!
Posted by Diabolu Frank at 9:32 PM