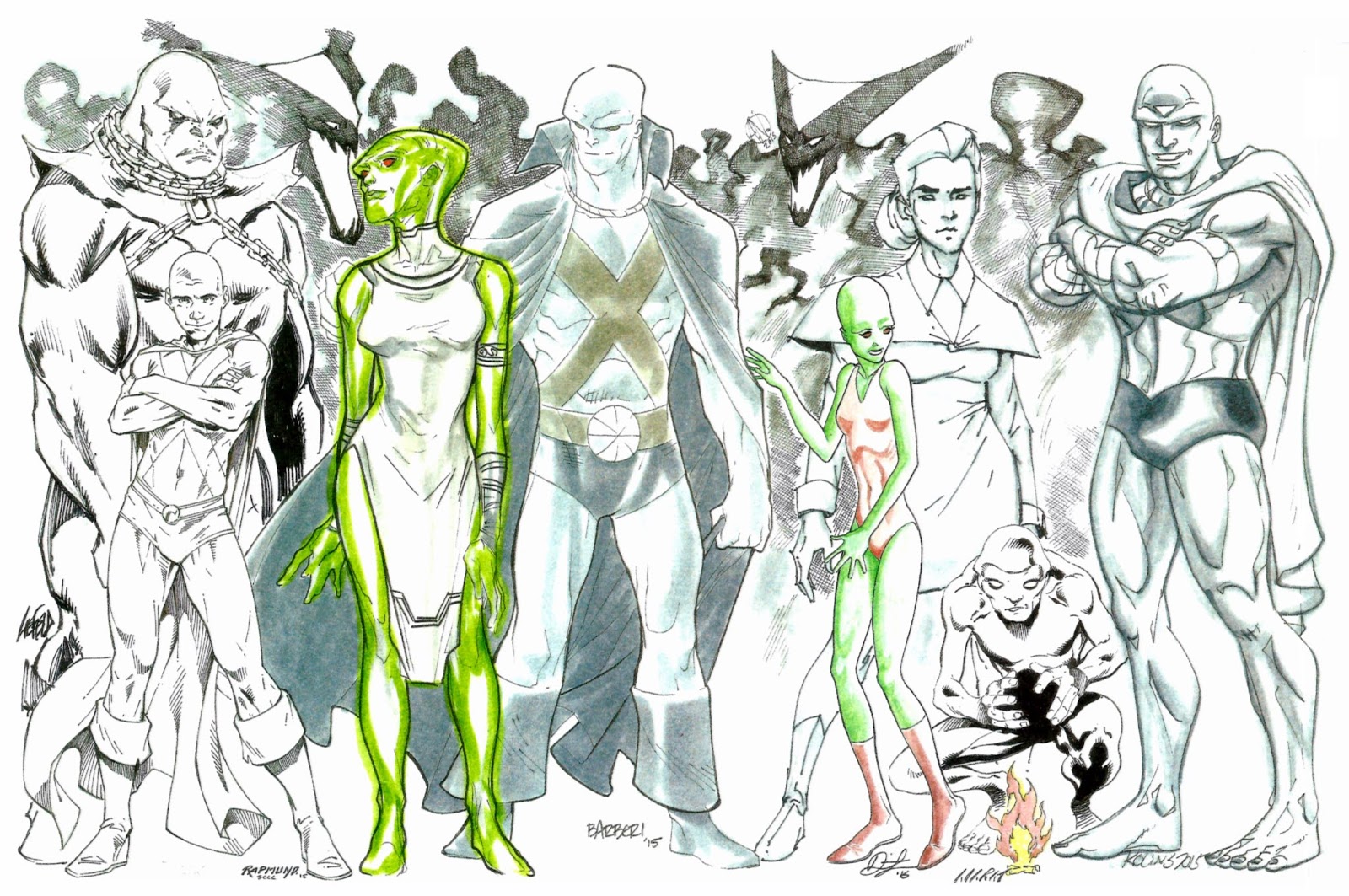 While the Manhunter from Mars is often treated as a derivative and minor character in the pantheon of notable comic book heroes, one aspect of his backstory is fairly unique amidst the legions of super-heroes who are orphaned or have no family to speak of. While I had a number of art jams going to showcase for the 60th anniversary of the Sleuth from Outer Space featuring fellow heroes, villains, and supporting players, the most obvious way to honor J'Onn J'Onzz was to devote the most effort and resources to a family picture. In the earliest stories about the character, his whole and living parents were introduced, with a younger (relatively) teenage brother showing up a few years after. All three turned up occasionally throughout the Silver Age in a peaceful domestic setting. Until 1969, Mars was a vibrant, healthy environment, in sharp relief to the usual trauma and loss surrounding other long underwear types. Even after the destruction of Mars, J'onn J'onzz spent nearly two decades shepherding the survivors and foregoing the adventurer's life. Just a few years after returning to the Justice League, a new retroactive history was given to the Martian that made him a widower and father to a deceased daughter. This new status quo came to define J'Onn for the rest of his career, and more than virtually any other character excepting Mr. Fantastic, J'Onn J'Onzz is the consummate "family man" of comics... even in the absence of blood relatives, through his memories and human surrogates for those he's lost.

Younger brother T'omm was introduced in 1961, and was the character who initiated the jam in pencil form. An initially unnamed spouse eventually dubbed M'yri'ah came out of the 1988 Martian Manhunter mini-series, and was the first inked & colored figure in the piece. Our hero J'Onn was third and closest to the center, tasking the artist to heavily incorporate him into the previous two drawings (note the hand on his wife's shoulder & cape flowing behind bro.) Daughter K'hym shared publication history with her mother, is the only character in the jam who was fully colored, and the artist successfully integrates her into what had appeared to be a closed loop between the initial trio. This was the core of the family to me, so there was greater flexibility with the rest of the piece.

J'Onn's parents debuted in 1956, but had to wait until 2001 to get names in one of the last issues of the only pre-New 52 Martian Manhunter ongoing series. I wanted a large, strong figure to anchor the far right side of the piece, which the artist of father M'yrnn excellently provided. Unfortunately, I couldn't fit the entire 11" x 17" image space onto a Xerox, so I had to cut two copies together, and the far side of that figure took a quality hit in the scan above. I cleaned it up as best as I could. To my knowledge, J'Onn's grandmother wasn't referenced before 1986, and not since, so her artist did a great job mingling a minor character into the increasingly busy and cramped piece. With mother Sha'sheen, I preferred the Silver Age model of the character to the modern version that was basically just J'Onn in drag. I like that the parents are facing each other while appearing to be looking over their family. Finally, part of what made me so happy about how M'yri'ah was rendered is that she appeared to be looking at the upper left portion of the page, where her assailant Ma'alefa'ak was added, stealing her full attention away from her husband and this monster's twin brother (though a familal resemblance isn't a given among shapeshifters with polar opposite moral alignments.)

The J'Onzzes Besides blood relatives, I also wanted to add a religious aspect to the family portrait through the most famous Martian deity and the one with the greatest impact, H'ronmeer. This deity became associated by name with the plague that retroactively wiped out the Martian race from 1988 until relatively recently, though generally being treated as benevolent overall. I thought this being might show up around Malefic or J'Onn's grandmother, since they had closest ties. I also thought a painter might contrast well against the firmer lines of the other figures, but that angle didn't pan out. Instead, I went with Adrian Nelson, who I knew I could rely on to deliver quality work after his previous efforts on Bloodwynd, Malefic, and a third piece I haven't posted yet. He added graytones to fill in background areas and specifically to flesh out Sha'sheen so that she'd feel more of a piece with the rest of the figures. More importantly, his ominous and intricately crosshatched H'ronmeer(s) not only tie the entire jam together, but also allude to the duality of perception about the character (creative & destructive fire from the heart of the Red Planet.) Nelson did a fantastic job making this work feel complete!

The only member of the family I intentionally left out was J'ahrl J'onzz, an ancient ancestor who was never rendered in a definitive way who only played into one issue of one minor year 2000 story arc. The Justice League cartoon added a second child of J'Onn & M'yri'ah in the early 2000s, who was only just confirmed as another daughter named "Tanya" (spelling per closed captioning) this year on a recent episode of Supergirl, and for the first time his children's names were pronounced as "Kim" and "Tahn-yah." Unfortunately, in an exceptionally tone deaf move a few months prior in the comics, J'Onn J'Onzz's entire family and Martian life was retconned away as he was presented as a created weapon employed by White Martians with false memories. I find that angle hateful, but am confident it will ultimately be ignored, since J'Onn's family has already appeared in two cartoon series, two direct to video original animated movies, and now have been repeatedly referenced in a live action network television show (and rendered in CGI!)

Posted by Diabolu Frank at 8:23 PM