1984
A house ad featuring a selection of DC Comics covers includes art by Chuck Patton and Dick Giordano from Justice League of America #230. The scene of the Manhunter from Mars battling The Marshal of the Soldiers of the Red Brotherhood was likely my first exposure to either character.

1985
Purchased the Super Powers Collection Martian Manhunter Action Figure at a K-Mart for $1. One of my favorite toys, lost by my brother. The included mini-comic was likely my introduction to the character, followed by an appearance in the one packaged with Doctor Fate. Crisis on Infinite Earths #7, given to me by a Waldenbooks employee because she thought I was just too cute in my old Houston Oilers jacket, was likely my first legitimate DC Comic with J'onn J'onzz.

1987
Bought a discounted copy of Justice League International #8 and read it in the back of a pick-up truck headed for Nevada. J'onn J'onzz has the best lines in a very funny book, and I become a fan of the character as more than just an action figure.

1988
Purchased Martian Manhunter #1 at a Las Vegas comic shop. It cost nearly twice as much as a normal comic, and I hated everything about it. Killed my interest in J'Onn J'Onzz as a solo character for years. 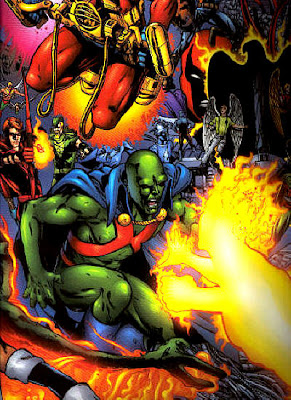 1996
Despite enjoying years of stories featuring the Martian Manhunter, I took him for granted and focused on other characters as favorites. After reading Justice League: A Midsummer's Nightmare #2, I'm not only bowled over by the affecting story, but also flooded with memories of how much I love this character.

1997
Friends purchase a WebTV set-top unit, and we waste hours searching the internet. I find plenty of super-hero fan sites, Wonder Woman foremost among the ones that interest me, but absolutely none devoted to the Martian Manhunter. I vow that I shall create one... someday.

1998
There are two fan sites up by this point, The Martian Manhunter Chronicles and Maleca'andra. I finally buy a WebTV of my own, but lack the skills to create a site on it. I instead spend a lot of time on message boards engaged in flame wars, especially in versus threads. My first trial web page is devoted to the scrapped sequel to Capcom's Resident Evil video game, including some unrelated and comically limited graphics. 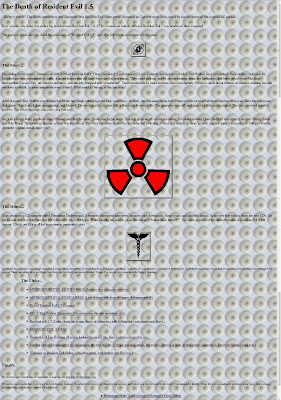 1999
Tired of repeating myself constantly and in long form while defending the Alien Atlas on the web, I decided it was time to build that site, if only as a repository from which to copy and paste on threads. Z'onn Z'orr: Home of the Martian Manhunter was born, and just a few months later, the city that was its namesake got tossed into the sun. So too was much of this first version of the fan page. The formatting and backgrounds were all preset WebTV options, the text was littered with typos, and the graphics were stolen from wherever I could find them. It was all ridiculously primitive, so I tried to make up for it with humorous, informative, inventive text. Despite having set up the page as my main entry point, with links out to webrings and sites like CBR (back when stuff like that mattered,) I decided to reroute everything to a new home. The old page remained as an external link hub.

2000
The rebranded J'Onn J'Onzz: The Rock of the JLA benefited from my forcing friends and acquaintances into sweatshop labor to provide scans, as well as my hogging the computer at my father's house to edit those images. Among my worst crimes during this period was having one friend scan portions of the enormous JLA vs. Titans poster that ran the length of a bathroom. I helped another who was visiting town from overseas "break in" his new scanner. WebTV hosted all my scans, and offered extremely limited space (less than a gig.) My friend tried to help me by compressing the scans so much that the degradation made them an eyesore even by millennial standards. I used almost none of them in the end. 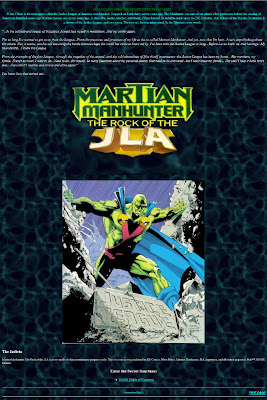 2001
After countless hours of effort and enormous frustration with the limitations of the WebTV interface, my interest in continuing the web site slid. One of my abused friends gave me a compact disc that saved the site in a transitional state in the middle of that year, allowing me the occasional walk down memory lane. There were little to no updates from that point on, and at the end of 2002, I killed the site with my WebTV subscription.

Saturday, September 1, 2007
Inspired by Rob Kelly's The Aquaman Shrine, I decided to rework my old fan site material into a similar daily blog. Blessedly, Google's Blogger/Blogspot had all of the HTML assistance I needed to avoid the headache of actually building anything, but was vastly, vastly, vastly more user friendly than WebTV. The early going was clubfooted and my first banner ugly as sin, but I got by with time and a little help from my friends.

Thank go out to:

Awww, shucks. Thanks you for all the hard work and varied content.

I was actually just thinking of dusting off the limited first drafts for my planned "Vengeance of Banality" blog, but who knows how far that will go.

I have been getting better about actually doing things...

This site is so great and it you seem to do it effortlessly! This is one of my 'every day' stops.

Thanks for keep J'Onn in the forefront of the blogosphere!

Anj, I only wish I had the juice to put together as comprehensive and entertaining a blog as Supergirl CBC. If you had even a fraction of the involvement here that you do at DC Bloodlines, you'd have been right on top of my thank you roll!

That timeline should be set to the same music as the timeline in "Rock Me, Amadeus", or its superior parody, "Rock Me, Jerry Lewis".

Odd that it doesn't include your discovery of American Secrets.

I missed this until just now. "Secrets" came my way during the site research period circa 1999-2001. A bunch of the Bronze Age Manhunter material, the completion of my JLI run, and "Secrets" were all acquired in a trade with one of my customers, who was essentially donating his unwanteds to the shop, but I gave him credit anyway.

Frank - I absolutely love your site! Your outstanding work here was one of the inspirations that led to the creation of FIRESTORM FAN. I enjoy how your coverage is deep and thorough, but also manages to be hilarious! You are THE content master, sir.

Keep up the fantastic work!

Aww, thank you, Frank! Though CMMH! turned into a bit of a gripe fest lately...hopefully I can get back in the spirit and start updating it again someday. And the DC Challenge brings back fond memories.

Your dedication to this site really shows: this is by far the best place for Martian Manhunter information, and I love the tone of the comments here, what keeps me coming back.

Liss, clicking on those links would direct to pages that were like a much snarkier and shorter version of the kind of content I do here. The backgrounds shifted by section, sometimes mild, other times eyesores. Maybe next year I'll throw up a few more screen captures...

I was really amused by the no-smoking warning. I mean, that kind of humor is right up my alley.

I would like to see more screenshots. I bet your opinion on a couple of things related to Martian Manhunter fandom has changed over the past 10 years.

One look at the original Vile Menagerie subjects tells that tale...