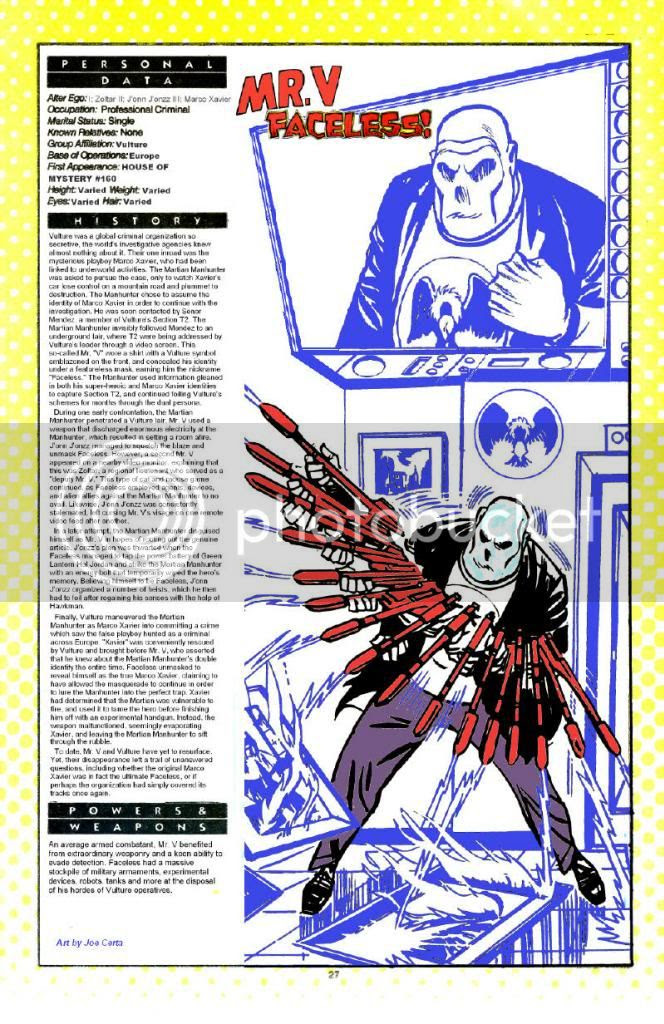 History:
Vulture was a global criminal organization so secretive, the world's investigative agencies knew almost nothing about it. Their one inroad was the mysterious playboy Marco Xavier, who had been linked to underworld activities. The Martian Manhunter was asked to pursue the case, only to watch Xavier's car lose control on a mountain road and plummet to destruction. The Manhunter chose to assume the identity of Marco Xavier in order to continue with the investigation. He was soon contacted by Senor Mendez, a member of Vulture's Section T2. The Martian Manhunter invisibly followed Mendez to an underground lair, where T2 were being addressed by Vulture's leader through a video screen. This so-called Mr. "V" wore a shirt with a Vulture symbol emblazoned on the front, and concealed his identity under a featureless mask, earning him the nickname "Faceless." The Manhunter used information gleaned in both his super-heroic and Marco Xavier identities to capture Section T2, and continued foiling Vulture's schemes for months through the dual persona.

During one early confrontation, the Martian Manhunter penetrated a Vulture lair. Mr. V used a weapon that discharged enormous electricity at the Manhunter, which resulted in setting a room afire. J'onn J'onzz managed to squelch the blaze and unmask Faceless. However, a second Mr. V appeared on a nearby video monitor, explaining that this was Zoltar, a regional lieutenant who served as a "deputy Mr. V." This type of cat and mouse game continued, as Faceless employed agents, devices, and alien allies against the Martian Manhunter to no avail. Likewise, J'onn J'onzz was consistently stalemated, left cursing Mr. V's visage on one remote video feed after another.

In a later attempt, the Martian Manhunter disguised himself as Mr. V in hopes of rooting out the genuine article. J'onzz's plan was thwarted when the Faceless managed to tap the power battery of Green Lantern Hal Jordan and strike the Martian Manhunter with an energy bolt that temporarily wiped the hero's memory. Believing himself to be Faceless, J'onn J'onzz organized a number of heists, which he then had to foil after regaining his senses with the help of Hawkman.

Finally, Vulture maneuvered the Martian Manhunter as Marco Xavier into committing a crime which saw the false playboy hunted as a criminal across Europe. "Xavier" was conveniently rescued by Vulture and brought before Mr. V, who asserted that he knew about the Martian Manhunter's double identity the entire time. Faceless unmasked to reveal himself as the true Marco Xavier, claiming to have allowed the masquerade to continue in order to lure the Manhunter into the perfect trap. Xavier had determined that the Martian was vulnerable to fire, and used it to tame the hero before finishing him off with an experimental handgun. Instead, the weapon malfunctioned, seemingly evaporating Xavier, and leaving the Martian Manhunter to sift through the rubble.

To date, Mr. V and Vulture have yet to resurface. Yet, their disappearance left a trail of unanswered questions, including whether the original Marco Xavier was in fact the ultimate Faceless, or if perhaps the organization had simply covered its tracks once again.

Powers & Weapons:
An average armed combatant, Mr. V benefited from extraordinary weaponry and a keen ability to evade detection. Faceless had a massive stockpile of military armaments, experimental devices, robots, tanks and more at the disposal of his hordes of Vulture operatives.

Quote:
"They are not regular members of my syndicate... and therefore expendable! ...Now listen carefully... and I shall give you the details of the crime..."

Created by: Jack Miller & Joe Certa
Posted by Diabolu Frank at 12:00 AM

Wow! Great job! If I didn't know better, I'd think you'd scanned the page from Who's Who.

Wait, when did that GL powerbattery stuff happen? MUST HAVE IT.