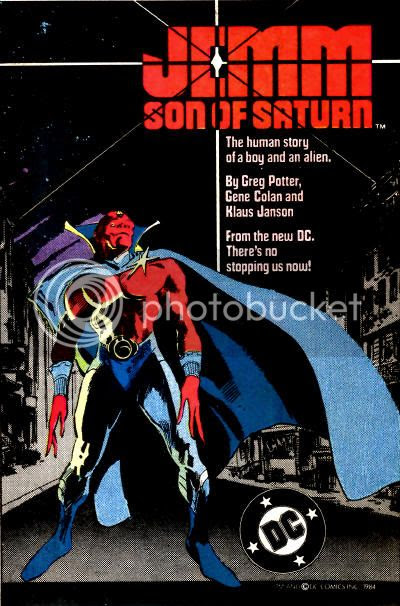 In 1982, E.T.: The Extra-Terrestrial was one of the biggest things on the Silver Screen and pop culture. It was the story of a white suburban boy and his loving siblings trying to hide a gentle telekinetic alien visitor from mom and ominous federal investigators. Things got a bit bleak and emotionally manipulative toward the end, but it was still fun for the whole family.

In 1984, Jemm, Son of Saturn was a DC Comics maxi-series which they probably really wished had been a mini-series. Capitol City Distribution was selling less than 7,000 copies of the later issues, which all told would mean it probably sold as bad or worse than a dismal modern comic. It was the story of a black kid from the slums (whose blind grandfather and smack selling brother had small roles) who is constantly imperiled by his fast friendship with a gentle telekinetic alien prince hunted by his own people and ominous Earthly agents. Things started bleak and went downhill from there, so that by the time the sickly male sex slaves were having their flesh flayed by the whips of their fetishistic sadist captors, you knew this DC Comic wasn't for kids. The tag line is almost a warning that there's a dollop of "A Boy and his Dog" mixed in with the maudlin drama. According to The Slings & Arrows Comic Guide, "In its favour, it's downbeat in unexpected areas, but it seems to go on forever... The plot... and storytelling... are very confused. You'd need a heart as big as a house to care a jot about any of the participants, and the last two pages should carry a health warning."

In the end, I liked Jemm. It reminds me in some ways of Martian Manhunter: American Secrets, but it accomplishes far less in twice the space. The story itself is very forgettable, especially through repetition. There are countless incidents of bondage and (often sexualized) torture, endless flashbacks, similar scenes played out with mild variations/character changes, and an awful lot of bums running around. Still, there's an unusual sweetness to Jemm, a reticence about his constant deadly conflicts, that is endearing. Individual moments and characters do leave an impression, and the relationship with Luther is unique-- at least to testosterone fueled comics.

I suppose I could use the series difficulty to explain why I announced a Summer of Saturn last year, got two issues and a lot of filler in, then dropped the whole shebang. I've tried for two Saturdays in a row to get cute with continuing the series synopsis on "Saturndays" to no avail, and honestly, I'm done apologizing for fallow weekends. So, expect a lot more Jemm material for a while, whenever and whatever I can get done, and hopefully we'll all be rewarded by the endeavor (if only to get it "off the books.") Jemm's a pretty swell character who has been badly mishandled lately, so now more than ever, I figure our world could use a little education in his. Besides, the sooner I get this mini-series covered, the sooner I can launch into the Ostrander/Mandrake series. Come to think of it, there's another reason for my progress to have been so slow...
Posted by Diabolu Frank at 2:39 AM

I don't know that the newer stuff is out of left field, or even mishandled. Just not a direction I'd have headed in.

Say, have you seen the source blog brightest day Sept solicits? They're going to force me to read Green Arrow #4, the bastards.

I kind of like Jemm, and I probably would read this miniseries, so I appreciate the introduction/overview and the synopsis from a few weeks ago. Jemm seems a little "80's" to me, but I'm always up for a benevolent alien story.

I just looked up the Sept. solicits, m.c. This means I'm going to have to buy it, too, against my will...

m.c., I see your point in that Jemm was increasingly placed in situations where violence was his only recourse. The story was at least partially about his loss of innocence, because he can't cry every time he kills a bad guy. On the other hand, despite their necessary maturity, both Jemm and Luther were still friends to the end, indicating the boy lived on inside the prince. Ostrander held on to that passivity in his interpretation, even if he threw must everything else about Jemm's world out the window. It's been a decade since those Martian Manhunter appearances, but after all the torture J'emm went through previously, Robinson would need a lot of space to explain where his sea schange came from. Married life?

Sucked into Green Arrow? Gah! That cover is awesome, but I'm dreading the insides.