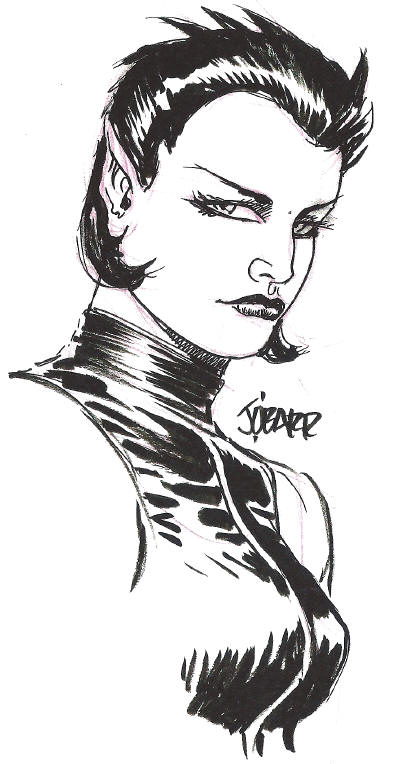 Things don't always work out as planned in the sketch collection game. At the recommendation of Anj, I'd intended to get a piece commissioned by Aaron Lopresti, most probably of someone like Patrolwoman Diane Meade. I waited too long, and Lopresti went back home on the very day I'd intended to talk with him. Meanwhile, The Crow artist James O’Barr has been one of my top choices to do a B'rett commission, a character I haven't felt truly captured in previous attempts. O'Barr was often away from his table for panels and such, and when present Crow fans were queued up around him, so I kept putting off talking with him as well. Another fellow I wanted for B'rett was presumed absent until he suddenly turned up on Sunday, so I gave him all my reference on the character. I had a second project going that would allow for another B'rett commission, but the first artist still had my reference materials.

With less than two hours left for the con, I dug through my available options. Lopresti was one of several artists I'd hoped but failed to negotiate a Meade commission from, and when another heroine didn't make it to the page, I was facing a convention with minimal YY representation (at least in subject matter.) With this in mind, I narrowed O'Barr's prospects down to two: Cay'an, who I'd already found a very strong female artist to draw who was sadly booked up this show; and Aubrey Sparks, who seemed like a better fit for O'Barr.

Time was short, and I was still juggling the last commissions, so I was frankly relieved by the minimal contact I had with O’Barr. Some dude in jorts was recording an interview with the artist recorded to his smartphone, so O’Barr's assistant concisely negotiated the details with me. I did tell O'Barr that I dug his work, and a bit about the other commission I'd wanted, but he "prefer(red) to draw a girl, anyway." Given the appealing results, I'm inclined to agree. Where previous takes had displayed Scorch's rebellious redneck devil girl attitude, O’Barr captures her somber, reflective side. Plus, he did his layouts in red pencil, a nice tough.
Posted by Diabolu Frank at 4:06 AM

That is great! And O'Barr is a great choice for Scorch (who you know I love!)

Can't wait the see the rest!

I wouldn't have noticed the red pencil if you hadn't pointed it out--and that is quite fitting. Pretty nice over all...but I never was a big fan of Scorch. (Sorry, Anj!)