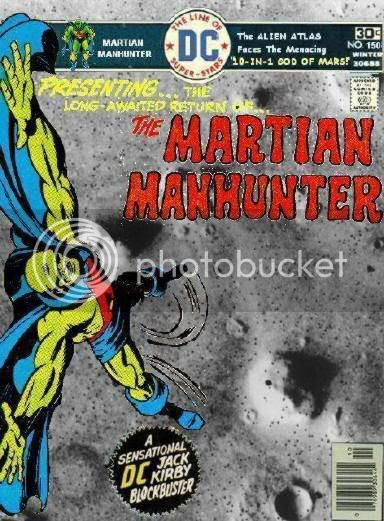 The Making of "The Martian Manhunter #150"

In 1970, the co-architect of the House of Ideas left Marvel for the seemingly greener pastures of DC Comics. There he would edit his own line of books, while also performing nearly every creative chore on the individual titles, which he would of course create for himself from scratch. While the concept looked good on paper (in more ways that one,) various factors led to the cancellation of his Fourth World titles, most within two years time. While discouraging, the King was still under contract, and set about generating new works. Most fared even worse that the previous batch, with titles like Kobra, Atlas, and plain vanilla Manhunter yielding only an issue each under Kirby's pen. Only "Kamandi, The Last Boy On Earth" enjoyed real longevity. Kirby began making plans for a return to Marvel, but would potentially be hindered by a contractual clause stipulating a set number of pages be produced by the King before he would be free to pursue other work.

Midyear, Gerry Conway was hired as an editor at National/DC, and set about putting together his own line of new books. He soon began trying to persuade Kirby to produce pages for "Conway's Corner" as a means to burn through his contractual obligation with inventory material. Kirby was by this point used to editing his own work, but their acquaintance led to Conway taking over editorship of Kamandi after Kirby left, plus the eventual extended life of a partially finished debut issue of "Kobra" to a short-lived series in the hands of new creators. Further, at the start of 1976, Carmine Infantino was let go by National, and incoming publisher Jeanette Khan made Kirby nervous about the shortfall in his page count. By this point, Conway had already staffed his titles, but suggested to fellow editor Murray Boltinoff that he take advantage of Kirby's availability to perhaps improve the numbers on the floundering "Manhunter from Mars" series. Boltinoff was on his way out, however, but agreed to surrender the reins to Conway. By April, Kirby had worked up material enough for three issues of "Manhunter," fulfilling his bargain just as Gerry Conway was quitting DC to become Editor-In-Chief at Marvel (for all of three weeks.) Regardless, Kirby was out the door, leaving "Manhunter from Mars" without an editor or follow-up creative team.

The title went on a brief hiatus before being handed off to Tony Isabella. Emulating the cover of New Gods #1, Isabella had Kirby's original art reworked to incorporate actual photos of Mars taken by the Viking probe that summer. A short-lived retitling of the series began with "The Martian Manhunter #150," released that winter, and ironically became one of the best-selling single issues Kirby produced for DC in the 70s. Drawing from the Biblical allusions made by Denny O'Neil in several earlier tales, Kirby continued the portrayal of J'Onn J'Onzz as an extraterrestrial Moses guiding his exiled people through the galactic wilderness in search of a new Mars. Unlike O'Neil, Kirby delved into the more mystical fare, beginning with "The 10-In-1 God of Mars."

In a holding pattern just outside the Sol system, the nomadic Martians argued about their next course. Some wished to return to Mars, regardless of the certain death that awaited them there. Others proposed the conquest of Earth, a direction science leader J'Onzz strictly forbade. However, J'Onzz himself felt the pull of both his former home planets, and took a brief sabbatical to answer their call.

The Alien Atlas was drawn to most of the solar system's planets and several moons en route, each of which presented him with an aspect of the unnamed supreme being of the Martian people. In each encounter, J'Onzz would confront aspects of Martian faith: Eternal Destiny, Understanding of Death, Widom of Dream, Destructive Power of Judgment, Desire for Love, Understanding of Despair, and Delight of Beauty.

The Martian Manhunter came to realize through these conflicts that the universe itself was broken. In guiding his people into the vast nothingness of unknown galaxies, they would gain access to the remaining three of the ten aspects of the endless, and the tools to elevate the Martian survivors to heroic stature in pursuit of universal justice. J'Onzz returned to his people elated with new found purpose, only to discover Bel Juz had guided the elevation of an entirely different (and ultimately artificial) spiritual leader for the Martians, the young madman Z'vi Z'har.

Even within the confines of a presupposed truncated run, Kirby couldn't help but introduce mythology that would influence future creators like J.M. DeMatteis and Neil Gaiman. He truly was the King, and we're all poorer for his not having continued this tale beyond his three issues.
Posted by Diabolu Frank at 9:28 PM

Frank, I am really enjoying these posts. I will forward them to a friend who is a teacher at my synagogue. Unfortunately, he missed out on the registration for a big event this Sunday. So, I will help him prepare for next year.

I think that we can see a lot of parallels between the Bible, literature and comic books. J'Onn's people in the Silver Age seemed to fall back into the worse instincts despite J'Onn's attempts to lead them to their better selves. Later, J'Onn's struggles with Ma'alef'ak recalls many old struggles between siblings.

Are you a Spaniard living in South East Manitoba? We would like to hear from you!

Frank, I hope that all is well.

You might be interested to learn that Aquaman #35 has a special guest-star: J'Onn J'Onnzz! Here is the link: http://www.comicbookresources.com/?page=preview&id=24816

Could this be a sign that J'Onn will start taking a higher profile at DC? I can hope.

I still haven't read any JLU, but this post makes me yearn for a Martian Manhunter story with some depth to it. If J'onn is cast as the messianic hero of his people, I think that's a story with legs. DC heroes work well with mythological overtones. Or cast him as an Earth detective. Or a shepherd of a bunch of sophomoric superheroes. Or all three. Just cast him as something other than misused scenery, and I'll be happy.