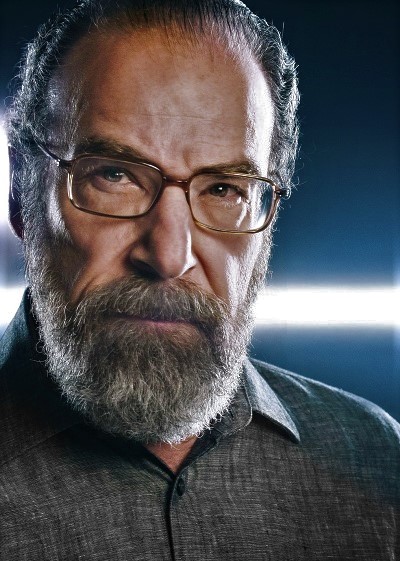 The Manhunter from Mars has one of the simplest origins in comics. Scientist accidentally teleports Martian to Earth, dies from the shock, and strands the alien. What takes up the entire first act of most pictures is less than five minutes here, especially if you just do it in narration or a flashback. My first impulse was to do a cute, cheap stunt casting. Bill Mumy an O.G. Silver Age comic book nerd who was a close friend and co-writer with the late Miguel Ferrer, one of my favorite character actors who voiced J'Onn J'Onzz in Justice League: The New Frontier. Done, right? You know who else's origin could have been told in under ten minutes? Captain America. Scrawny draft wash-out volunteers for experiment that transforms him into a super-soldier. The scientist who made it possible is killed by a Nazi, leaving the weight of the entire program's success on one patriotic man. Two sentences, so twice as long as J'Onn's. But see, how much lesser of a movie would The First Avenger be without the greatest hype man in all of comic adaptations, Stanley Tucci as Doctor Abraham Erskine? Tucci is one of America's most beloved character actors playing a character with deep convictions and a true hope for humanity. Tucci makes you love Erskine before he bites the bullet, and his admiration and confidence in Steve Rogers makes the audience feel the same towards him. Realistically, the safest route to introducing J'Onn J'Onzz as a solo feature is to use The New Frontier as a guide. You don't have to open with J'Onn in Erdel's home laboritory, but at some point you'll want to orient the audience to his situation. In the old comics, J'Onzz wandered around in an unprecedented human identity for a few hours before deciding "I'll just be a cop, because." Even if the origin is a low priority, the audience is going to expect more than that. The most accepted explanation came from Mark Verheiden with elaboration by Darwyn Cooke. J'Onn continues to live in Erdel's house for a time, assuming Erdel's form as needed, and otherwise learns about Earth culture from watching too much television. Detective John Jones comes into being because Martians are susceptible to copaganda. While communicating this evolution to the audience, we'll need a performer who can play both Erdel and J'Onn pretending to be Erdel. He's got to explain to the audience the set-up, endear himself so that his death has emotional resonance, and then help put-over a likely silent Martian impersonator as a lovable protagonist. Mandy Patinkin's one of my favorite actors, nominated for seven Emmys with one win, plus a Tony besides. You wouldn't likely be able to get him for a comic book movie, and he's not going to sign any nine-picture deals. He's one of the warmest and most human actors on the planet, and while I'd avoid using the Post-Crisis "Saul" given Patinkin's eight years playing a character by that name, I'd like Erdel's (probable) Jewish heritage to be acknowledged through the casting. Yeah, Patinkin could out-Tucci the Tucc if given half a chance.
Posted by Diabolu Frank at 3:58 AM

I can't wait to see who you come up with next, this is fantastic.