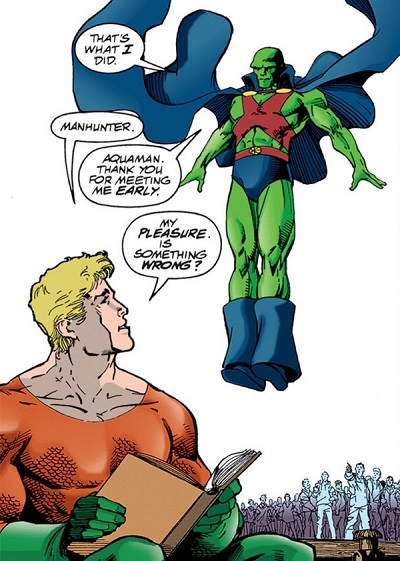 Locus made contact with Vandal Savage to seek his help in ending this new age of super-heroes before it could begin, just as a few well-placed senators had done to the Justice Society of America. Savage had already gathered a group of four super-villains to target the new group, consisting of the Thorn, Clayface, Eclipso, and Solomon Grundy. Meanwhile, Manhunter met with Aquaman on the dock to offer him a lift into downtown Gotham City. The Sea King was struggling with learning to read and speak English, to which J'Onn offered, "Learn German first. It's more logical. That's what I did." The meeting was not prearranged, and Aquaman took note of the Manhunter's possessing telepathy that far outstripped his own empathic abilities.

To the relief of Aquaman, he was soon set back on dry land to attend a press conference at the JSA's old headquarters. Not so fast, as Aquaman's soft mumble and ignorance of the surface world ("I'm sure that Sea Devil is a fine man...") plainly irritated the reporters. J'Onn J'Onzz avoided the microphone entirely, with only Black Canary and Green Lantern demonstrating any aptitude in public speaking. While the team was official out and named, lots of questions remained about their jurisdiction, politics, nationalism, and so forth. These deeper questions were set aside upon the thunderous crashing of the affair by Savage's quartet of villainy.

The heroes of the League had never been targeted before, and were thrown by the unprovoked assault, as well as the need to protect the host of imperiled collateral bystanders. Martian Manhunter did one-up Clayface after being threatened that the crook could transform into his worst nightmare. "My. How frightening. Try this one. It's from Mars." Clayface creamed at the sight of a giant alien beast with claws and teeth a third the size of the bad guy. Another unexpected power for the Alien Atlas.

Eventually, the three-quarters of the quartet turned on a rampaging Grundy, allowing the League to regroup and strategize. Manhunter recovered from a temporary blinding from a black diamond eyebeam to emit his own Laser Vision to harden a water-saturated Clayface. However Grundy collapsed the hotel ballroom, and the quartet were teleported away from the scene. Home audiences cheered another victory for the new Justice League of America being reported upon by the likes of Vicki Vale, Lois Lane, and Jack Ryder. Even "bystanders" Ted Grant and Alan Scott signaled their approval, though The Batman had every intention of running them out of his town.

In the aftermath, Vandal Savage tried to quit his association with Locus, though they seemed to perhaps persuade him otherwise. On the scene, when Ryder launched into a heated criticism of the League, the newly arriving Green Arrow sent a shaft through his mic. Seemingly in tow was Simon Carr, representing a wealthy anonymous benefactor offering to bankroll the team. An inventor named Ted Kord had already been retained to facilitate anticipated advanced equipment, vehicles, and facilities... 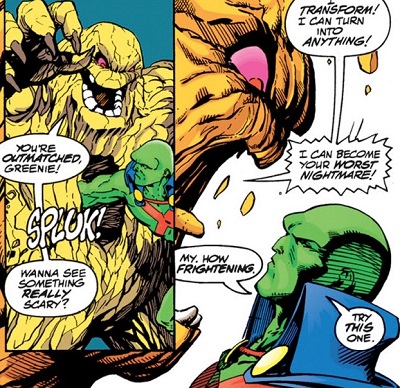 "Group Dynamic" was by storytellers Mark Waid / Brian Augustyn / Barry Kitson. Since this was arguably the least issue of the maxi-series, I think it's the best place for heavy nitpicking on my part. I realize that this was a new story from the early days of the JLA, unbound by prior continuity, except it isn't. The 1988 Secret Origins story had been edited by Waid, and the maxi-series studiously avoids retelling the actual 1960s League tales while simultaneously referencing them. What's the point of having a walking DC Comics Encyclopedia co-write a project like this without having it steeped in established continuity? The scene with Aquaman learning to read is nice... except Arthur Curry taught him to read (cursive diary entries no less) in The Legend of Aquaman (also edited by Waid.) The villains for the issue include the Matt Hagen Clayface (introduced in December of 1961) and Eclipso (August '63), with cameos by Metamorpho (January '65), The Atom (October '61), The Creeper (April '68), Blue Beetle (November '66), and the New Blackhawks (June '64) in a story that would be contemporaneous to The Brave and the Bold #28 (March 1960). The League are supposedly putting the Sea Devils out to pasture, even though they won't debut for five months? The only non-Golden Age heroic cameo that legitimately predated the League was the Challengers of the Unknown (February '57). Story wise, I get having the most stripped down "action heroes" reacting to the new super-hero team, but nerd-wise, it breaks my brain. Further, there's a new version of the "Justice League of America" naming sequence, already trod in Secret Origins. The Thorn was an exceedingly weird pull, given that she had barely appeared in the Golden Age and Infinity Inc. made a story point of her having disappeared completely following the births of Jade and Obsidian. Likewise, Eclipso had mostly kept to his own strip in House of Secrets until being revived for a Green Lantern subplot in the '80s, so why have him battle Hal Jordan twenty years too early? Grundy and Eclipso are especially dangerous villains, so it was a shame they offered so little a threat. Plus, Green Arrow may have been the first expansion member, but do we really need him around this early? This issue was... fine... but it clearly raised my geek hackles.
Posted by Diabolu Frank at 1:57 AM

you learn something new every day, I didn't know about the Legend of Aquaman mini, I'll have to check that out. I have thought that DC should have done a crossover with J'Onn & Eclipso when they each starred in House of Mystery and House of Secrets

This post was definitely a "I gotta be at work in a few hours, so just hit publish" kind of deal, and I still haven't reread it, so glad it was at all understandable.

"The Legend of Aquaman" committed me to that character. One of my very favorite stories about the Sea King.

Yeah, I've long wanted to tie J'Onn and Eclipso's "houses" together, but DC only drifts further away from that notion of history.