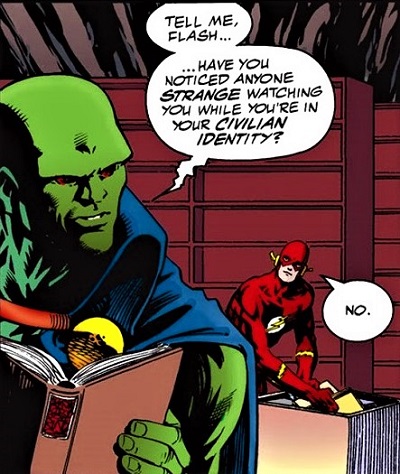 Storytellers Mark Waid / Brian Augustyn / Barry Kitson offer another action-light, interaction-heavy tale of the Post-Crisis founding five Justice League. Locus had employed T.O. Morrow to help vivisect the Appellaxian bird to create a new humanoid automaton, but it failed to launch. Vandal Savage wondered how they would topple the League before they found their feet, but Locus' Aryan leader remained confident. Meanwhile, in Chicago, the old Blackhawk foe Killer Shark and his men attempted a heist at Kord Industries... where the League was meeting with disheveled college-aged tech genius Ted Kord about outfitting their headquarters. It didn't take Ted long to decide that he had more interest in super-heroics than the family business. On Rhode Island, the military dropped off the fire Appellaxian at the League's cave for safekeeping when their own study efforts proved far less effective than even Locus'. Simon Carr suggested to Aquaman that they use it to start a trophy room, while his nephew Snapper was reintroduced as the team's on-site mechanic and electrician. Still fairly insufferable, but at least no longer completely useless. Snapper had even rewired the speaker system, asking Martian Manhunter, "You like Aerosmith, right?" J'Onn J'Onzz had been to Metropolis to pick up newly created signal devices from S.T.A.R. Labs. 1971. I winced a little. "They're uplinked to a global satellite system. With them, we can summon each other as well as stay in constant contact. I have never seen anything quite like them. 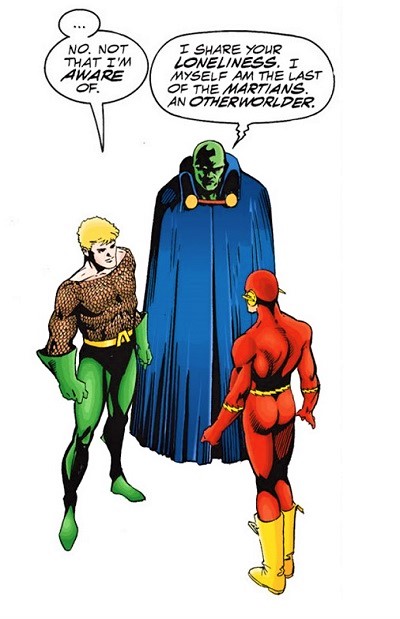 At various points, couplings of Leaguers discussed their origins and motivations, usually with a single panel to highlight these milestones. No, Manhunter and Aquaman did not get one. They're not invited into the brewing love triangle either, not that much of anything will come of it. J'Onn asked if Flash had noticed anyone strange checking him out in his civilian identity. "Just curious." Aquaman referenced (I believe) meeting Superman in a Man of Steel annual, and seemed to be cagey when it came to others like him in Earth's oceans. "I share your loneliness. I myself am the last of the Martians. An otherworlder." J'Onn offered an All-Star Manhunter two line origin. "I have been here many years... but I still struggle to adapt." Aquaman was happy to note that Manhunter was the only surface person who didn't have a problem with his default quiet voice. "I'm a good listener." J'Onn also had to explain what a bulb wrench was, or rather wasn't... Pairing off, Aquaman related another retconned story, this time his first meeting with the Flash in Time and Tide, noting how he was hung with the name simply by a brief initial association with a super-hero. He was irritated by the presumptuousness of these people. "Like you, I avoided them for the longest period. In time, however, I came to realize that they were more accepting than I'd given them credit for... As a general rule. Some regions of the world are more relaxed, some less... but I eventually found, after years of living in hiding, that it's best to be yourself around the people of Earth." Black Canary offered a bit of pushback on that, and an angry Aquaman sauntered off, given that Dinah had played along with Green Lantern's joke about his needing a "bulb wrench..." Canary was dismissive of oh so common male aggression, and thanked J'Onn for treating her as an equal in the field after numerous "chivalrous" acts by Flash and GL specifically. "Why would I not?" Exactly. 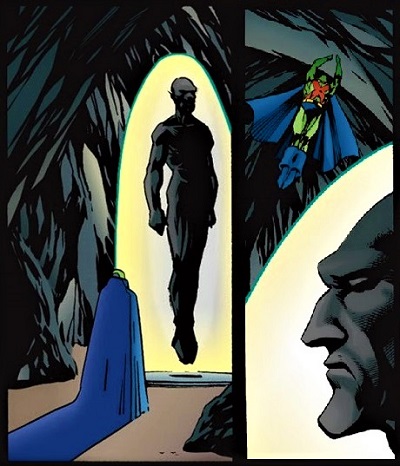 The meeting table in the Secret Sanctuary was unveiled, complete with circa-1997 JLA logo, as well as personalized chairs with the heroes' own symbols. I still feel a pang of guilt for not having bought the DC Pocket Heroes version, but they're still relatively cheap on eBay if I ever change my mind. There was a chair with a Superman shield at Flash's aspiration, prompting a team debate, until Superman seemed to show up and take his seat. Turned out to by the Manhunter, who then turned into some sort of Elmer Fudd / Mr. Mxyzptlk* hybrid. Initially shocked silent, the team broke out into laughter. "You're a shapeshifter, too? That's so wild!" He actually turned into the giant monster last issue, but I guess they meant his gift for mimicry. "Geez, J'Onn... how many more powers have you got? You're a regular--" This led to teasing Black Canary over her constant JSA name-dropping. J'Onzz was relieved that his attempt at humor hadn't fallen flat, and the team seemed to be bonding enough that another member besides J'Onn almost revealed their true identity. Aquaman had a poorer sense of social propriety than a Martian though, and picked that moment to sullenly confront Green Lantern about making him the butt of a joke over his difficulty adapting to matters like screwing in a lightbulb with superhuman strength. Green Lantern sorta-kinda "If I offended..." and called the meeting to a close. Everyone else retreated, leaving the Alien Atlas alone to gaze silently at the Appellaxian for a full page before flying up to pass immaterially through the ceiling... *Spelled from memory like a boss... nerd. 1990s, Aquaman, Black Canary, Flash, Green Lantern, Justice League International, Justice League of America, Justice Society of America, Martian Manhunter, Retcons, Vandal Savage
Posted by Diabolu Frank at 2:01 AM

This is a great recap , it makes me want to re-read the mini & spelling from memory = awesome

Thanks! I've covered so much marginal-to-bad material for this blog, that the opportunity to do something broadly liked is a treat.