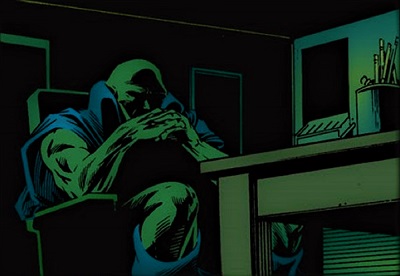 Snapper Carr called the Flash back to base after days of it's being empty. "...morale's a little low. I can't believe J'Onn betrayed us like he did... Canary's cynical as it is, and Aquaman... I keep expecting him to swim off in disgust. He's just waiting for the rest of us to turn on him now." Snapper jabbed that he hoped they could set aside their paranoia long enough to save the world from three simultaneous globe-threatening climate disturbances, and everyone appeared to respond to the distress signal except J'Onn. Possibly not having seen each other since the confrontation, Flash asked about Green Lantern's pursuit of J'Onn. "I've searched high and low. Nothing." In truth, the Manhunter was present, invisibly undetected, and left for a third location after the rest paired up for separate priority targets. The Flash was uncomfortable with his physical proximity to Black Canary while running to the Arctic, and she was put all the way off when he let slip that he had less a girlfriend and more a fiancé. Both had trouble sleeping at night knowing J'Onn was out there with all their secrets, presumably telling them to Locus. The pair still succeeded in bypassing a flaming giant Locus proxy body agent to destroy the machine that was melting the polar icecaps. At the Mariana Trench, Aquman asked why Green Lantern was always giving orders, then belly-laughed at his answer. "You're not the leader. Flash is the leader! ... J'Onn, Canary, and I talked about this weeks ago. It's obvious to us!" The revelation poked leaks in Lantern's energy construct bubble, which would be much needed against a giant Locus agent sea monster. The heroes tricked it into destroying the second atmosphere-altering machine. Locus agents collapsed Vandal Savage's base on top of him, but he survived by hiding in a sarcophagus, plotting revenge. 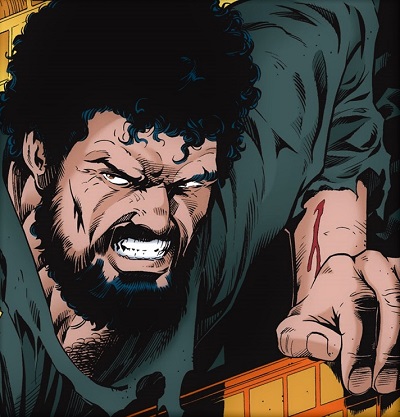 The eighth Appellaxian had failed to launch, but was found and freed by Locus, who eventually inserted it into the human body of Simon Carr. After four months of nightmares and a loss of control, Simon finally confided in Snapper, who tried to alert the Justice League. Instead, he had his face smashed through a computer monitor by Uncle Simon. The machine in California's Redwood Forest was the lowest priority, so the pairs of heroes reconvened there, only to find J'Onn J'Onzz working the device. Green Lantern thought that cleared up any lingering doubts, assuming the Alien Atlas was guarding it, missing entirely the downed Locus proxy body off to the side. The Flash councilled against acting too rashly. "J'Onn's always been full of secrets. Suppose he neglected to tell us about his 'deathvision' or something. We only know one way to take him down for certain... and that's to take advantage of his one weakness." While Flash ran a ring of fire on the ground around J'Onn, Green Lantern punched him with a giant energy fist. J'Onn pleaded with them to extinguish the fire, but Aquaman popped him one while declaring "Not a chance, traitor!" Then the enormous explosion happened. "I tried... to tell you... to keep the fire away. The machine... I was attempting to shut it down safely. It was pumping... methane-based gases into the atmosphere! Not only are they deadly to human life... they're flammable!" Never mind that they knew about J'Onn's weakness because he told them, but hey, only you can start forest fires! "Change the World" was by storytellers Mark Waid / Brian Augustyn / Barry Kitson with inker Michael Bair. In 1997, Grant Morrison gave an interview to Wizard Magazine for a special edition devoted to JLA, featuring sections with his thoughts on each member. "When I talk with other writers about JLA, a lot of them tell me they don't like the Martian Manhunter, and think that if there was going to be a story where someone betrays the JLA, then he's the guy who would do it. I see him much differently. If someone was to betray the JLA, he's the last person who would do it." Wizard stated his rationale was that Manhunter was the most stalwart member, in good times and bad, specifically referencing the Post-Crisis contrivance that he'd been a member of every incarnation. Obviously that wasn't true of the actual publishing history, and cue a slew of writers having Manhunter either betray or quit the team in some fashion. Ultimately though, Morrison was right, because fans roundly rejected or ignored these hot takes and pestered DC to get J'Onn back on the team. Anyway, I feel like Waid also agreed with Morrison, and did his best to explore that angle in a "safe" environment to abort any of those other nefarious writers' plans. The Manhunter isn't entirely in the right during this maxi-series, but the League is very in the wrong with regard to their treatment of our boy. 1990s, Aquaman, Black Canary, Flash, Green Lantern, Justice League of America, Martian Manhunter, Retcons, Vandal Savage
Posted by Diabolu Frank at 8:00 AM

Why did Denny O'Neil get M.M. in Justice League Of America #71?

I'd like to see this as an animated movie! Who would you cast?

I don't think Denny was ever comfortable with the more powerful or fantastical super-heroes. That's how Black Canary replaced Wonder Woman. It's funny because he wrote Wonder Woman and Martian Manhunter solo stories, but always with them de-powered or otherwise diminished. He also tried to trade out the kryptonite weakness for a reduced power Superman, but the fans revolted.

I'm not a big animation guy, so I don't really have any thoughts on casting for a cartoon. I've been happy with most of the folks they've used to play J'Onn J'Onzz.