"It is the worst nightmare of a man who can be felled by a candleflame. The sky is on fire." Given their role in igniting the blaze to exploit Martian Manhunter's greatest vulnerability, the Justice League remained quick to blame him for the outcome. Aquaman especially is a jerk, pointedly referring to him again as "alien" and stating "We already know that, even for a land-dweller, you're a lying schemer! What other conclusion are we to draw? Locus is changing the Earth to suit you! You're the eighth Appellaxian!" Never heralded as a detective, Aquaman took an energy blast to the back from armed Locus proxies. While the dysfunctional, paranoiac League tripped over themselves beating Locus back, the Alien Atlas ripped the terraforming device to pieces. This was done at personal expense, as J'Onn was severely burnt in the process. The League abandoned the deathly still Manhunter to pursue Locus through a portal to one of their secret bases. The Aryan leader of Locus confirmed their plot to render the planet uninhabitable to humans while forcing a return to Pangaea. Somewhat recovered, "The Martian" traced the League to the Locus base, smashed through the ceiling with Laser Vision blasing, and demanded "Get away from my friends!" The League were audibly pleased and impressed. Green Lantern readily conceded leadership to Flash, who directed him to keep the continents in place until they could stop Locus' machines. J'Onn eventually began to take a pounding from the purple proxies, too weak to focus on turning immaterial. Flash moved his teammates to safety, then used super-speed to eventually determine the passwords to switch off Locus' contraption. Barry then asked J'Onn to use his telepathy to find a way to restore the proxies' minds to their human bodies. The probe instead set off a fatal neuroshock to kill the Locus soldiers and send their secrets to the grave with them. J'Onn felt like he was dying himself, and the heroes were left standing amidst piles of bodies. At least here Aquaman called for the Alien to get out of their thoughts before his own were snuffed. 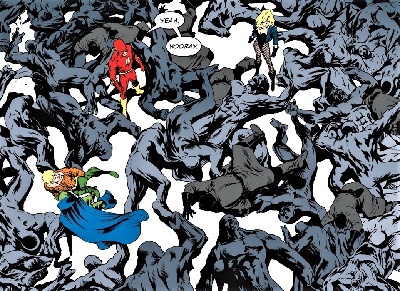 Back at the Secret Sanctuary, J'Onn J'Onzz was interrogated over his stalking of the League members in their private lives. "For years, I have been stranded on a world not my own... one that has a history of being... unreceptive to those who are different. One in which my senses are dulled by the simple light of a match... my life endangered by the flare of a campfire. Alone, in hiding, my survival depended on my powers of observation... of gathering and chronicling information on the motivations of the strangers around me. Recently, buoyed by the world's acceptance of you and others like you, I went public in search of kinship... During our first encounter, I watched you exterminate an alien force you knew little about... and take pride in that... We keep one of their corpses in the trophy room. I did not want to fear you people. My instincts told me you were good and noble. But you are, after all... still human. I needed to know more about you to guarantee my own safety. Foregoing an invasive mindprobe, I instead followed you with my enhanced senses... tracked you using an array of identities. I have no one to rely upon but myself. I did what I had to... to survive." 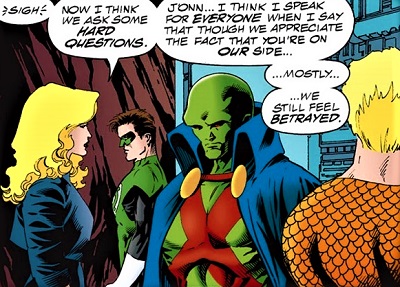 The team began to squabble amongst themselves again, and Black Canary despaired that they really didn't know each other at all. After a pause, Barry Allen chose to unmask and introduce his true self. Dinah Lance, Hal Jordan, Arthur Curry, and John Jones followed suit. The tension was broken, and trust was rebuilt. However, the super-heroes reasserted when a bloodied and battered Snapper Carr stumbled upon them. He revealed that Uncle Simon was the eighth Appellaxian, and had tried to kill him. Then a NORAD alert sounded, and the team rushed onto the beach to see a sky full of invading alien spacecraft... "Heaven and Earth" was by storytellers Mark Waid / Brian Augustyn / Barry Kitson with inkers Michael Bair & Mark Propst. The quality of embellishment was more varied this issue, but the art made excellent use of small figures in wide spaces to minimize the power and presence of the Justice League. Where there had been a lot of forced O'Neill/Englehart conflict amongst the heroes, their recovery process offers a lot of fun moments to showcase super friendships. These people should like and support one another, or to put it in my preferred terms, they should be DC instead of Marvel. This story also features one of the all time great J'Onn J'Onzz speeches, explaining his character and how he relates to the heroic community.
Posted by Diabolu Frank at 11:28 PM

Regarding super friendships like Batman/ Superman, Spider-Man/ Daredevil, Green Lantern/ Green Arrow who would you put with M.M.? I've always to see Swamp Thing & him.

Of the classic JLA, I think Aquaman is the best pairing. More broadly, I like Gypsy as his partner/sidekick. I don't know if there's enough contrast with Swamp Thing for me.