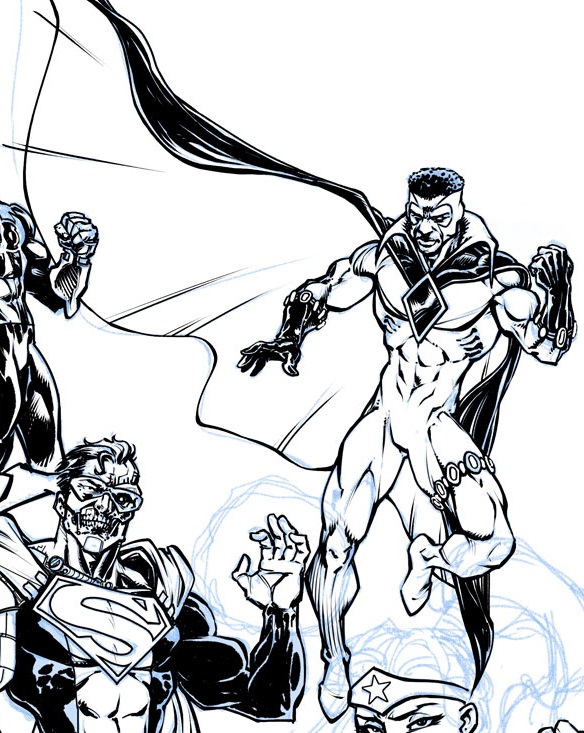 Despite having read over his stories several times with the expressed purpose of nailing down what his whole deal was, Bloodwynd yet remains a confounding mystery. To this day, most people still think that he was just a cover identity of the Martian Manhunter, not a separate character, if they ever think of him at all. I've had an angle on Bloodwynd in mind going back to at least the reviled Dan Vado run, but it doesn't fit with this project, and he somehow managed to become the motivating factor for the team's creation instead. I never talked up my interest in Manhunter/Bloodwynd like I did Artemis, so it would have been easy to shove him in between bigger characters for little more than a head shot or waist-up. I'm really glad Brad Green was able to draw most of the heroes as full figures, but especially that Bloodwynd is so fully realized with serious cape action and authentic African-American features. Bloodwynd has rarely looked as good anywhere as he does here! 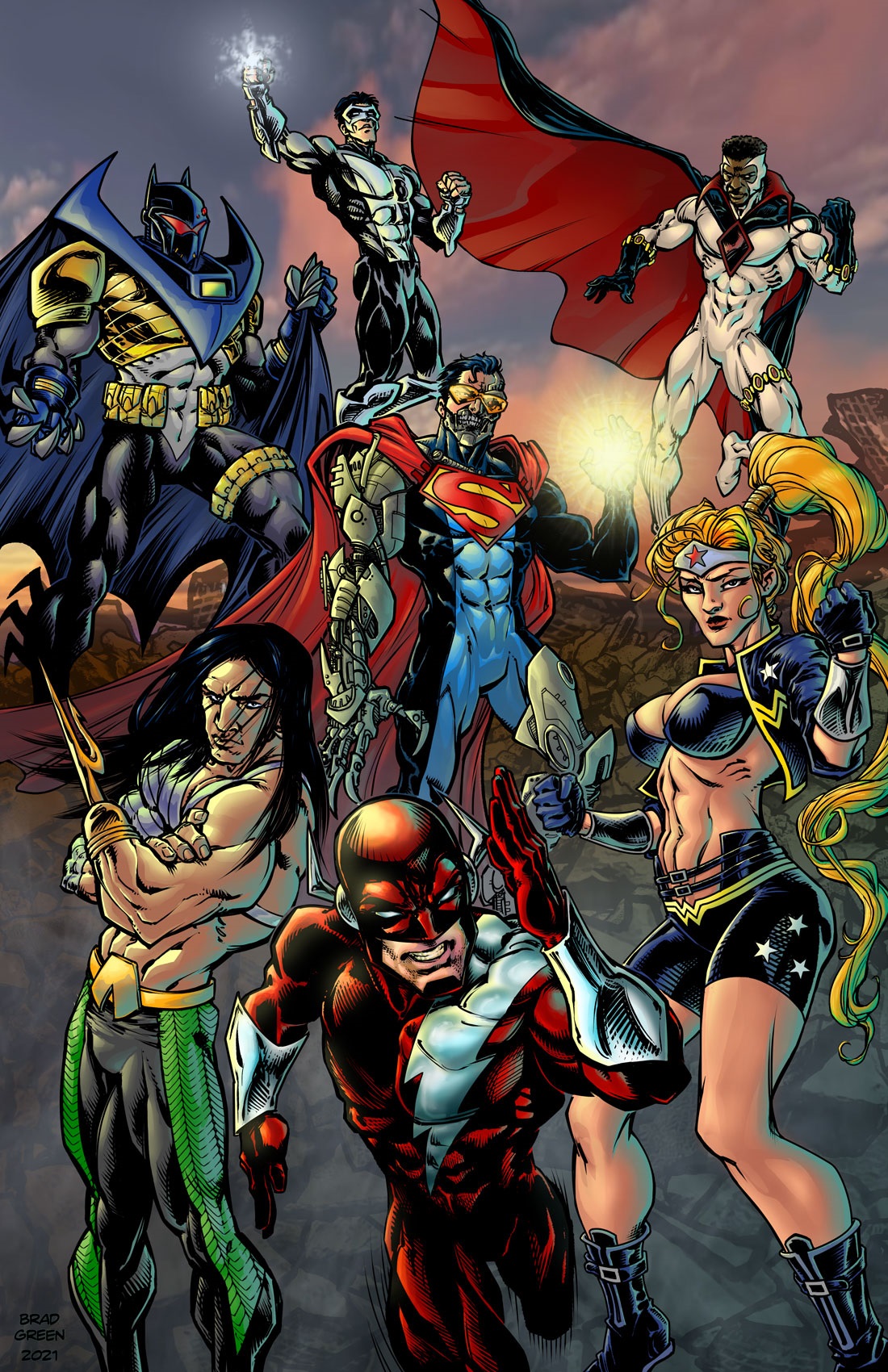 JUSTICE LEAGUE EXTREME #1
written by BRANDON THOMAS
art & cover by BRAD GREEN
variant cover by PHIL CHO
card stock variant cover by ED BENES
Bloodwynd is no hero. The mysterious dark mage of death has his own agenda, which he preferred to pursue in isolation. Outed by his nemesis, the necromancer briefly played at being a champion during a time of unprecedented tumult, when the world’s greatest super-heroes were threatened with extermination. The savage Kryptonian behemoth Doomsday beat Superman into a coma. Hulking criminal mastermind Bane broke the Batman. The minions of the war god Ares saw to the demise of a Wonder Woman. The multiversal destroyer Anti-Monitor extinguished the Flash. Alien tyrant Mongul drove Green Lantern mad. Extraterrestrial terror Imperiex obliterated Aquaman. The worshipers of Darkseid, Lord of Apokolips, executed Martian Manhunter. Through his necromancy, Bloodwynd recognized that these magnificent seven crusaders were tied mystically to the fate of all creation, and he stepped up to defend all of existence… including, especially, his own.

Then came Judgment Day, when the Overmaster and his Cadre arrived to witness the end of the Earth. Bloodwynd was cosmically aware that this moment was beyond him, that all hope rested with the Justice League. He merely watched as the universe ended… and began again. Like tumbling dominoes, the events set in motion by Doomsday led to Hal Jordan becoming Parallax, and with other terrorists against time itself, unleashed entropic energies that annihilated the universe. Only a handful of heroes remained at the Vanishing Point to restart everything with a Big Bang. Today, another Crisis in Time has begun, and many of the horsemen of the previous apocalypse rise again… without any of the Magnificent Seven to meet them. The Septuplicate is essential for salvation, a search for seven successors, an extreme form of Justice League.

Reignman has been born through the melding of the corpse of the Cyborg Superman Zor-El, further enhanced with the automations of John Henry Irons, controlled by the intelligence of the Kryptonian Eradicator. The unjustly exiled Amazon Artemis has chosen to wear the indignity on her back, in the discarded garb of her fallen sister Diana from her own hour of disgrace, as a living Requiem. Freed from Mother’s control and picking up where The Colony left off, the genetically engineered and psychologically programmed killer Jean-Paul Valley is among the sole standing vigilantes defending Gotham from Leviathan, within his sealed Knightfall battle armor. Arrived from a catastrophic near-future where his family perished before his eyes, Walter West takes no prisoners with the crimson quickness of Dark Flash. Compelled by the Life Entity within his White Power Battery to defend their home world against aliens, Kyle Rayner returns to Earth to wield nearly limitless powers over creation as the Omega Lantern. Obsessed with reclaiming the throne for his bloodline, Arthur Curry’s only surviving son, the berserker Koryak, would rule as Aquamaster.

The return of Mongul to Coast City attracts several of these anti-heroes who have faced him in the past, and understand the danger he normally represents. However, the flaxen fiend has not come alone, and his fellows’ reach and menace in unfathomable. What is the Superman Death Squad, and what purpose could it still serve in a world without the Man of Tomorrow? And what of these would-be heroes? Are they all that they seem, and could there be just as much of a threat within their ranks as without?
ON SALE 05.12.21
$3.99 US | 32 PAGES
CARD STOCK VARIANT COVER $4.99 US
FC | DC
This issue will ship with three covers.
Please see the order form for details.

“Justice League Extreme #1” by Brad Green
Posted by Diabolu Frank at 1:48 AM

This is great I would read this in a heartbeat!

Thanks! It was fun, and the artist did a GREAT job!