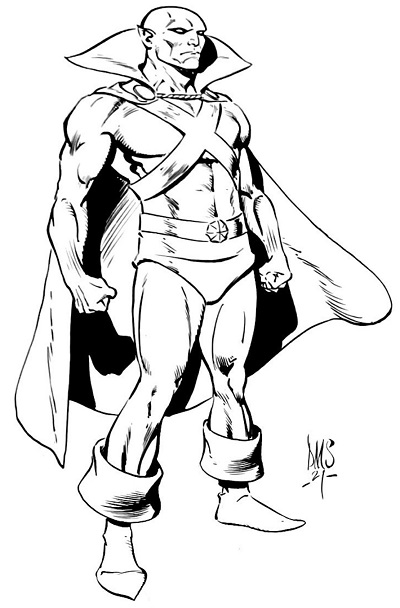 Juggling too many projects this week while also suffering from the energy depletion of dieting, so nothing substantial this week. One of those efforts is Siskoid's "Who's Editing" fan fiction thought experiment, for which I offered...

THE SATELLITE LEAGUE #1
written by G. WILLOW WILSON
art & cover by PAUL SMITH
Spinning out of the pages of DOOMSDAY CLOCK & ATOMIC! The Shadow Lords’ trap has been sprung, bringing about a new world order. Their Stormwatch Intercontinental now patrols the globe, capable of putting down any threats to their planetary rule. With the Justice League no more, numerous other challengers neutralized, and even the alien refugees being deported from Earth, their control appears complete.

Despite faltering at Shadowspire, there is yet a collective of heroes to fight back against these nihilistic fascists. Aided by Staq Mavlen before his demise, Ray Palmer located the 30th Century telepath Imra Ardeen within a dank prison, the captive of Adrian Veidt. Her own mission to save Superman, Johnny Thunder, and the new Rorschach Reggie Long has failed, but Veidt himself offered a path to redemption. The son of Erika Manson and Marcos Maez held special meaning to Doctor Manhattan, who left the boy to be raised by the former Silk Spectre and Nite-Owl in 1992. That boy, now adult, is somewhere on Earth with the full inheritance of power from his “foster father,” capable of correcting the time stream to save… everyone?

Dr. Osterman had prophesied before his disappearance, “In the year 2020, Superman’s timeline is bombarded by the reckless energies of the Old Gods, once again warping the Metaverse.” Instead, the New Gods brought about his end in that year, or have they? So many threads to pull on this harrowing new reality, and who better than the survivors of the classic Justice League, joined by their proud legacy from 1,000 years in the future? The Atom and Saturn Girl escape with Elongated Man, Hawkman and Hawkwoman, herself drawn to reunite her cohorts in serving The Life Entity during Brightest Day. But first, they need allies and a base to plan their next moves, and after a quick stop for Sue Dibny, they are directed to Monument Point, Virginia. Former mayor Jay Garrick is also under fire from the government after aiding XS & Kid Flash against A.C.E., and is ready to get back into the race as The Flash. Hot in pursuit is the Shadow Cabinet, led by the aged Veidt’s heir apparent, Cleopatra Pak… the villainess Nostalgia.
ON SALE 5.26.21
$3.99 US | 32 PAGES
FC | DC

Like all right-thinking people, I love Paul Smith, so it's fun to see his take on J'Onn J'Onzz. He's bit too inhuman to me, especially with the Spock ears and vampire collar on an otherwise very Silver Age-y interpretation. The Alien Atlas isn't on my fake team because I killed him off with the rest of the Magnificent Seven JLA at the start of the project. More on that next week...